Moonlight on the water 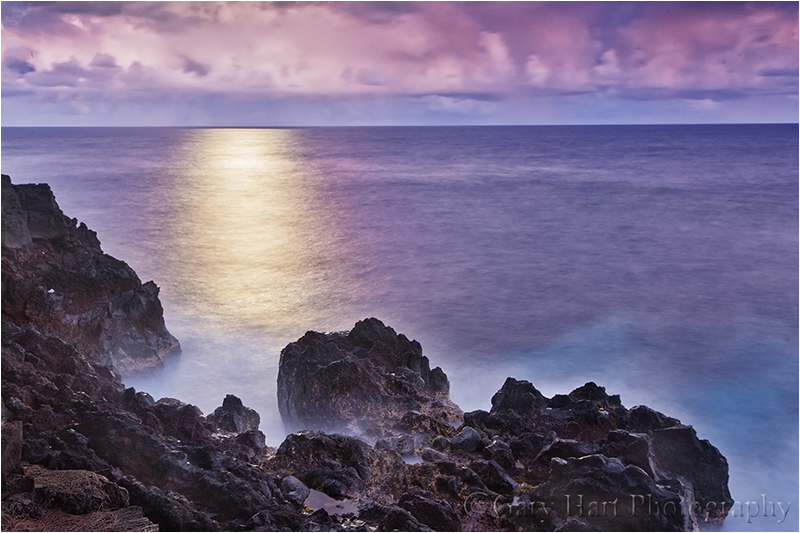 Not a lot of time for blogging right now. I’m in Hawaii for 2 1/2 weeks, leading two photo workshops on the Big Island. Yesterday we departed for sunrise at 4:45 and went pretty much straight through sunset (and beyond), with only a short break for breakfast. We started just as early today, but since we’re staying out late to photograph the Kilauea Caldera beneath the stars, I’m giving the group a little break this morning. So here I am at Starbucks, my home away from home….

The first workshop started Monday, but I arrived with my brother Jay (who’s assisting me) last Thursday to run all my locations in advance. Sunday night was the full moon, so we went to a “beach” (on the Hilo side of the Island, where we’re based, beaches are more rock than sand–great for photography, not so much for sunning and swimming) on the Puna coast hoping to photograph the moonrise above the pounding surf. Of course clouds rule over here, so it wasn’t too surprising that our moonrise was obscured by a bank of towering cumulus clouds on the eastern horizon. By the time the moon appeared, the sky was far too dark to capture detail in the moon and the foreground black lava cliffs. So we could do little more than appreciate the sight (not that there’s anything wrong with that).

We stayed about 30 minutes past sunset, but before leaving I decided try to capture with my camera some of the emotion of the moment. A camera is unable to record the range of light the human eye sees, but our eyes can’t come close to the camera’s ability to accumulate light and reveal detail in nighttime darkness. Since I couldn’t photograph the moon without turning the rest of the scene black, I chose instead to leverage my camera’s unique vision to capture the rocks, surf, and sea illuminated by moonlight.

Because I know many will ask, the image here is a 30 second exposure at ISO 400 and f8. In Photoshop I dodged and burned a little to even the light, and desaturated slightly so to prevent the (surprisingly vivid) color from overpowering the scene.