A few years ago, Don Smith and I were browsing the gallery of a famous landscape photographer when we came across a striking image of a tree silhouetted against a huge moon. Because the image was clearly a composite—a tree picture transposed atop a picture of a huge moon—we were initially shocked, but soon simply amused by the photographer’s dramatic, “blood pulsing” fiction of his “capture.” To this day, merely quoting a few words from that description will incite Don and me to fits of laughter. (Several years and gallery visits later, we noticed that the hyperbolic description had been removed, and actually got a salesperson at the gallery to acknowledge that the image was indeed a composite.) Yet, amusing as it is, that image turned out to be the seed that grew into a desire to capture something similar, legitimately.

Photographing a large moon is pretty simple—the longer the focal length, the bigger the moon. You can do it from your backyard. The difficulty comes when you want to include a terrestrial object with the moon (without digital shenanigans). Doing so requires an Earth-bound subject at great distance (ideally, a mile or more for the longest focal lengths), elevated against the sky. I’m always on the lookout for potential subjects for such a moonrise, and immediately log each discovery into my mental database.

But even with a subject, there’s the matter of determining the best vantage point, and figuring out when (to the minute, if possible) the moon and subject will align. If you follow my blog at all, you know how hard I work make this happen. Today there are apps that will get you pretty close (PhotoPills and Photographer’s Ephemeris to name the two I’ve used and recommend). But my own fairly convoluted (to others—I’ve been doing it so long that it’s second nature) technique predates these apps, and I find it more precise. Convoluted? At the risk of losing my audience, I’ll just say that it involves my iPhone, my computer, a moonrise/moonset app (Focalware), topographic mapping software (National Geographic Topo!), a scientific calculator app (HP 11c from RLM Tools), and a little trigonometry.

Informed by these resources, I rarely take a trip without knowing the moon’s phase, the best place to photograph it, and exactly when to be there. Often these trips are specifically timed for the moon.

So. Given the pride I take in moonrise/set photography, and my long-time desire to isolate a distant tree against a large moon, I’d love to tell you that I spied this tree teetering on Yosemite Valley’s rim near Dewey Point, plotted the place to photograph it and when to be there, and was waiting with my camera framed and focused when the moon slid into view. Uh, not so much.

Instead, on the day before my Yosemite Autumn Moon photo workshop, I was working with a couple who had hired me to show them Yosemite Valley for a day. After a nice, productive day we were wrapping up with sunset at Valley View, photographing reflections and warm light on El Capitan. My mobility severely limited by a cracked rib sustained in a bicycle accident a week earlier, I was quite content to enjoy the view, leaving my camera in the car.

The sunlight on El Capitan had faded and the shadows were deepening fast when my mind drifted to the moon. I knew it was about 60 percent full that day, and that it had risen (above a flat horizon) a couple of hours earlier, which meant by now it might be close to cresting Yosemite Valley’s vertical south wall. With zero expectations, I casually glanced upward, in the general direction of Dewey Point, and did an actual double-take when I saw an arc of white just cresting the ridge.

I immediately alerted my clients and “rushed” (remember, cracked rib) to the car for my gear. Wanting as much magnification as possible, I reached for my big tripod, 150-600 lens, and 1.5-crop Sony a6000 camera. In the time it had taken to set up and click a couple of quick shots, the moon had risen almost all the way as viewed from my elevated parking area vantage point, so I rushed down to the river to buy a few more seconds of the moon partially behind the ridge (moving down and closer steepened the angle just enough to make difference). From my new vantage point the moon was by itself against the sky, but I spied a solitary evergreen a short distance south of where the moon was balanced and I rushed (there’s that word again, but I have no memory of feeling any pain this time) upstream until the tree and moon converged and quickly zoomed, composed, focused, and clicked.

The processing of this image was pretty straightforward—a slight cooling of the color temperature and a moderate crop for framing was all it needed. While my tale of this evening is more about broken bones than pulsing blood, I’m proud to say that no ethics were harmed in the making of this image. 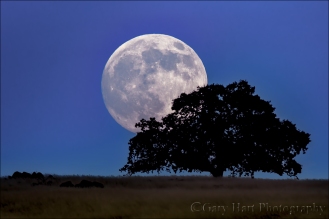 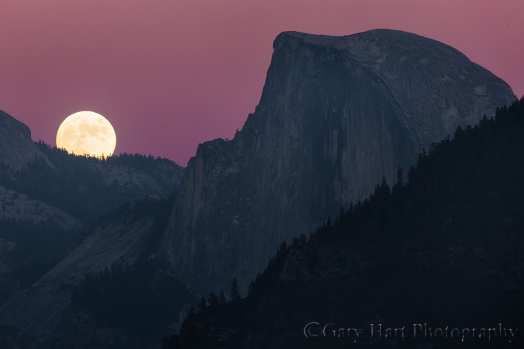 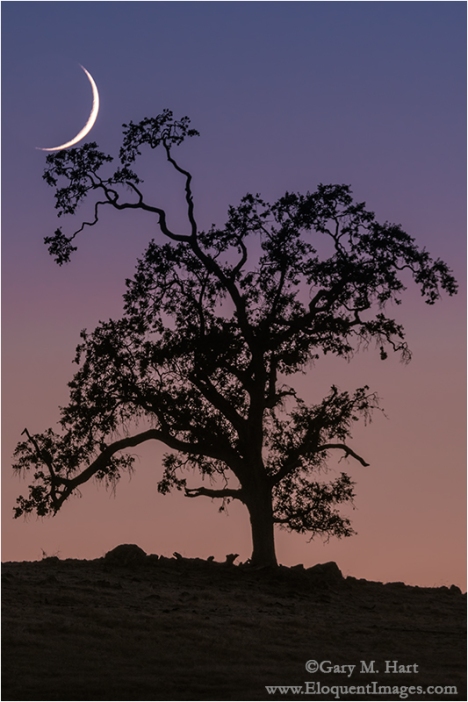 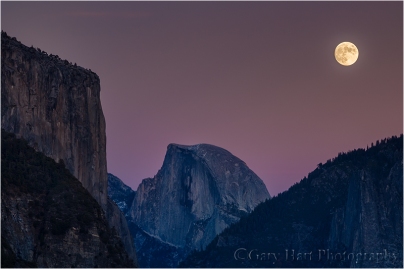 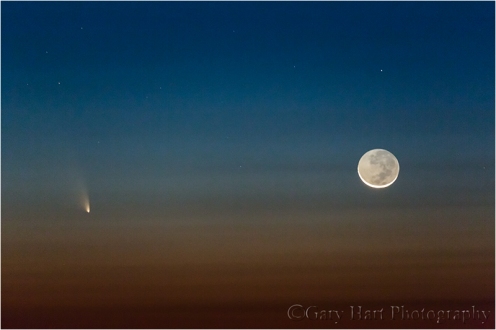