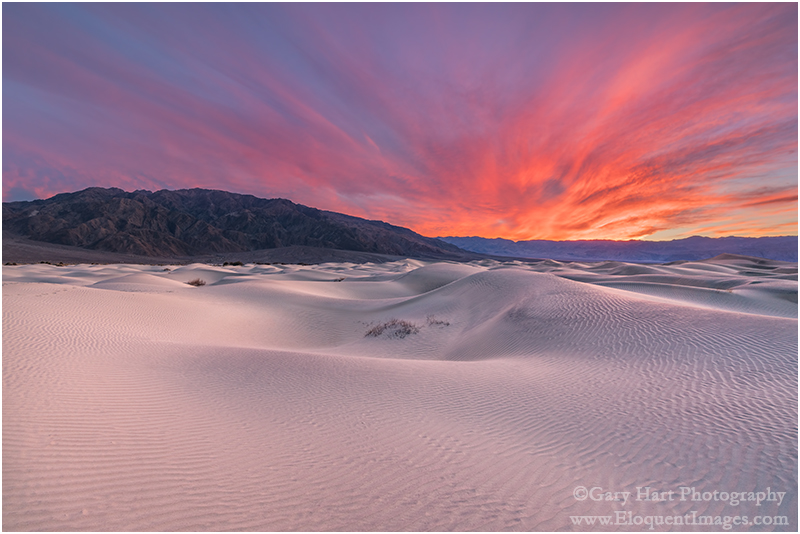 One of my photographic goals is to create images that allow viewers to imagine our world untouched by human hands. That goal sometimes conflicts with the expectations of my photo workshop students, who want to visit the iconic locations they’ve traveled so far to photograph. For the most part I’ve learned to balance those conflicting goals by mixing the popular views with hidden perspectives I’ve found over the years, but in some spots that’s easier said than done.

Few location make it more difficult to escape the crowds than the Mesquite Flat Dunes in Death Valley. The problem with Death Valley’s sand dunes is not just all the people, but that each step, by each person, is etched in the sand for days or weeks. And every year I have to look a little harder to find the pristine sand.

When I first started leading workshops out here (nearly ten years ago), I simply led my groups out onto the large dunes that everyone wants to photograph. I’d found a roadside parking spot, a little up the road from the dunes’ parking area, that shortened the hike and reduced the effort by traveling parallel to the dunes rather than sending us up and over each dune. After fifteen or so minutes of traipsing through sand, we’d usually find a spot that, while not completely untouched by footprints, was at least clean enough that careful composition could isolate enough virgin sand to please everyone.

But other photographers had similar ideas, so few years ago I admitted defeat and decided that it was better to photograph clean sand on the lower dunes than abused sand on the high dunes. After a little scouting I found another spot that, without too much effort, landed us in clean, untouched sand. The dunes here were not as dramatic as the high dunes, but everyone (including Yours Truly) was much happier to have clean sand to play with.

But this year I found a few footprints at this alternate location, and while it wasn’t enough to ruin our sunrise dune shoot, I could read the writing on the sand. Rather than wait for the crowds to catch up, for this year’s dune sunset shoot (the dunes are just too photogenic to do only once), I marched the group out to a completely new dune location, about as far off the beaten path as I felt they could handle. Though this trek took us nearly a mile from the road, our effort was rewarded with flawless sand as far as the eye could see.

To this point in the workshop we’d been blessed with nice clouds, but not enough direct sunlight for good sunrise/sunset color. On this day the forecast called for a return to more standard Death Valley blue skies, and sure enough, that’s the way it started. With the sunlight I was hoping to mix in a few clouds so we could finally get our color, but that afternoon a gray stratus layer rolled in and it looked like we were in for another bland.

Nevertheless, the group was enjoying the soft light on our pristine dunes when we noticed a shaft of sunlight illuminating a distant peak far north of our location. Over the next fifteen minutes or so this late afternoon light expanded south, along the Grapevine Mountains in the east; with it came gaps of blue sky that passed enough warm sunlight to fringe the clouds remaining overhead.

I’d been isolating the dunes and mountains with a telephoto, but when it became clear that we were about to bathed in 360 degrees of colorful sky, I quickly switched to my 16-35 and encouraged everyone else to do the same. The color soon followed, starting gold and slowly transitioning to pink. People were exclaiming and pointing at color and light in all directions so quickly that spinning to keep up almost made me dizzy.

Right before this shot I was photographing color in the east that was so spectacular that I turned to admonish those pointing in any other direction, only to realize that the scene in the west was at least as spectacular as what I’d been shooting. I whipped my tripod around and pointed my camera westward, toward a throbbing wheel of coral cloud, its pink spokes radiating outward to color the white sand.

At these moments I have to consciously force myself to avoid mindless panic shooting. Rather than capture every second of the rapidly changing color, I slowed down enough to ensure everything was right. The depth of field at 16mm depth of field was pretty extreme, so I felt pretty comfortable at f11, and chose a focus point just a few feet in front of me. And while I was pretty confident that my Sony a7RII could handle the dynamic range, I hedged my bets by subduing the brilliant sky with a Singh-Ray 2-stop hard-transition graduated neutral density filter.

It seems like every workshop has at least one memorable shoot, a convergence of landscape and light that unites the group in shared euphoria, and this evening on the dunes was certainly that for this workshop. But honestly, this is a shoot that will stand out in my mind for a long, long time, and I think the others felt the same way. We’d planned to do a moonlight shoot after dinner that night, but it seemed that everyone wanted a little more time to bask in the afterglow of what we’d just witnessed. So, citing our two-mile roundtrip hike and the prospect of fewer clouds the next day, I postponed that plan—I got no complaints.

My 2017 Death Valley workshop is full, but there’s a waiting list… 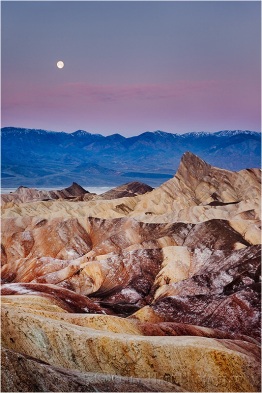 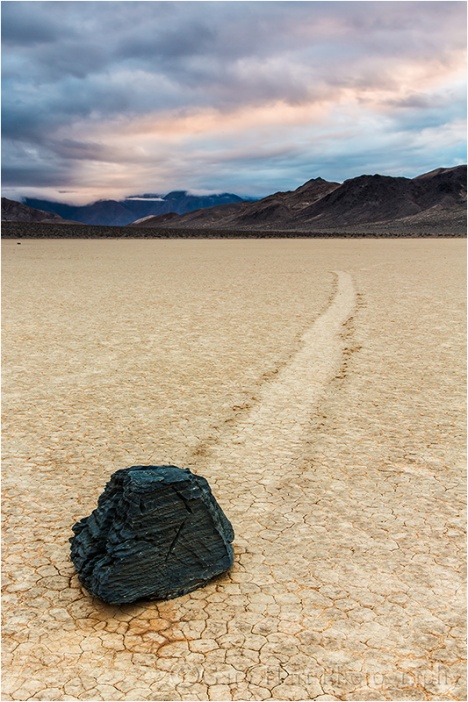 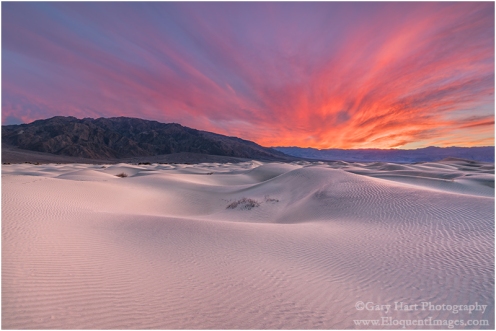 ← Yosemite and me
Let’s get vertical →

8 Comments on “Finding a new sandbox”