Making lemonade in the Grand Canyon 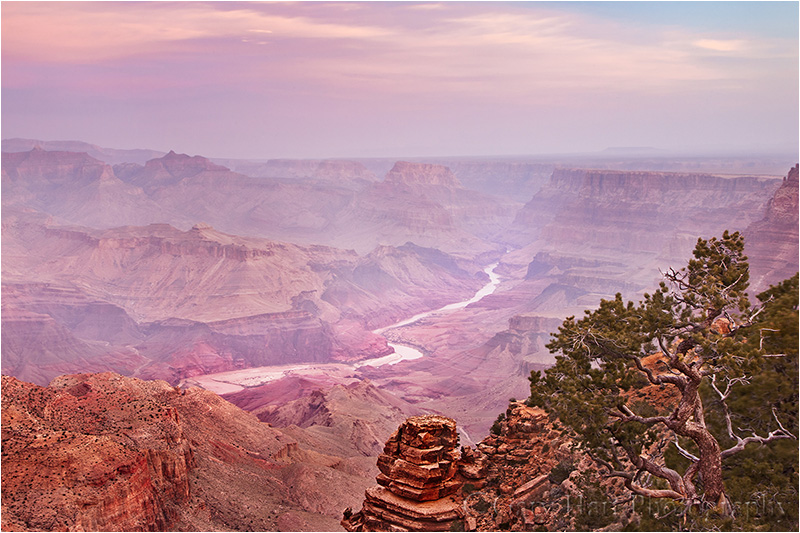 A lot of thought goes into scheduling a photo trip or workshop, with the prime goal being to photograph the desired location in the most photogenic conditions. For example, I try to schedule most of my workshops around the moon, timing them so the group can photograph a rising/setting full or crescent moon and then stay out after dark for moonlight or star trails. Another consideration is the likelihood of interesting weather, a prime reason you don’t see any California summer workshops on my schedule.

Regrettably, the most we can expect from these schedule machinations is to merely improve our odds before submitting to the whims of Mother Nature. The subjective aspects of film photography–the delay before results can be viewed, the black box of film processing (what exactly does happen at the lab?) or the fickle chemistry of the darkroom–make it a bit more nuanced than digital photography. This may explain why digital photography tends to attract people with a technical bent and accustomed to complete control.

The truly great photographers of days past–I’m thinking of Ansel Adams, but there are many others–achieved control over their images through a tedious evolution that brought mastery of the craft with it. Digital photography on the other hand creates the illusion of total control almost from the outset, and the craft of photography suffers for it. For these photographers the nuance/control dichotomy creates a wicked paradox, and I’m afraid this is where the wheels fall off for photographers who are accustomed to full control of other aspects of their lives. When faced with conditions beyond their control (the rule in landscape photography), instead of adjusting and adapting, digital-only photographers often head home in frustration, overlook the best subjects or light in favor of the shot they came to capture, or resort to extreme post-processing manipulation to strong-arm images back toward their original expectations. Much of my time during workshops is spent trying to encourage these participants to step back, take a breath, and adjust to the conditions rather than trying to force shots that aren’t there (no matter how badly they want it).

Which brings me to the above image from last month’s Grand Canyon trip. Don Smith’s past Northern Arizona workshops were a little later in the spring, and while very productive, they were also frustratingly dogged by the blue skies that are an unfortunate fact of life in American Southwest. (As many readers know, Don and I reciprocate on our workshops, trading off assisting each other in an arrangement that’s as productive as it is enjoyable.) So when Don scheduled this year’s Northern Arizona workshop for mid-March to capitalize on a full moon and improve our chances of seeing more clouds, I was all for it.

And clouds we got. Unfortunately, these clouds weren’t the lightning popping, rainbow bending, snow blanketing variety we’d hoped for. Instead, we were greeted by gray-painting, haze producing, moon blocking stratus that played havoc with our plans. To Don and me any clouds are an upgrade from sunny skies that limit quality photography time to about twenty minutes before and after sunrise, but I’m afraid most of the group, harboring visions of neon sunrises and a lunar disk suspended above the canyon, was a harder sell.

For our second and final Grand Canyon sunrise we assembled at my favorite Grand Canyon photo location, Desert View, about 30 minutes before the sun’s scheduled appearance. Here the canyon’s plunge toward the Colorado River is less precipitous than other view points, allowing compositions that gradually lead the eye through the frame. And unlike many rim locations, where the views are primarily straight across to the other side, Desert View is on a pivot point where the river’s general orientation changes from north/south to east/west. Standing on the rim here gives expansive, unobstructed views upstream, to the north, and downstream, to the west.

Overhead that morning was a promising mix of clouds and sky, the most promising sky of the trip, but the view into the canyon was obscured by a soupy haze. The inhibited visibility and a frigid wind were enough to chase several workshop participants back to the cars, but I hope those who stayed learned a lesson that morning. Rather than lamenting the inability to capture the Canyon with the classic alternating brick-colored ridges, jutting mesas, and sheer ravines that seem to stretch all the way to infinity, I encouraged everyone to look for images that emphasize the myriad rocks and trees in the foreground.

Walking I west along the rim I found a gnarled tree, its twisting trunk and limbs seeming to mimic the Grand Canyon’s tributaries and meandering flow. I tried several compositions featuring this tree, snapping the image above early in the shoot, just as the clouds started to throb with the pink glow of sunrise. At that early hour the indirect light reaching the canyon floor was largely reflected from the glowing clouds, further enhancing the color in the already vivid red rock below. A graduated neutral density filter enabled me to extract color and detail from the shadowed canyon while holding the color in the much brighter sky.

Unbeknownst to me, the haze that morning turned out to be an asset, not a hindrance. While I didn’t get the “classic” crystal clear infinity view so popular with photographers, I got what appears to my eye to be a soothing pastel watercolor of this breathtaking location. Not exactly what I’d envisioned, but something that pleases me even more because I don’t have anything else quite like it.

When life gives you lemons….

← Photographing the Grand Canyon: It’s not as easy as it looks
Yosemite Falls moonbow →

5 Comments on “Making lemonade in the Grand Canyon”