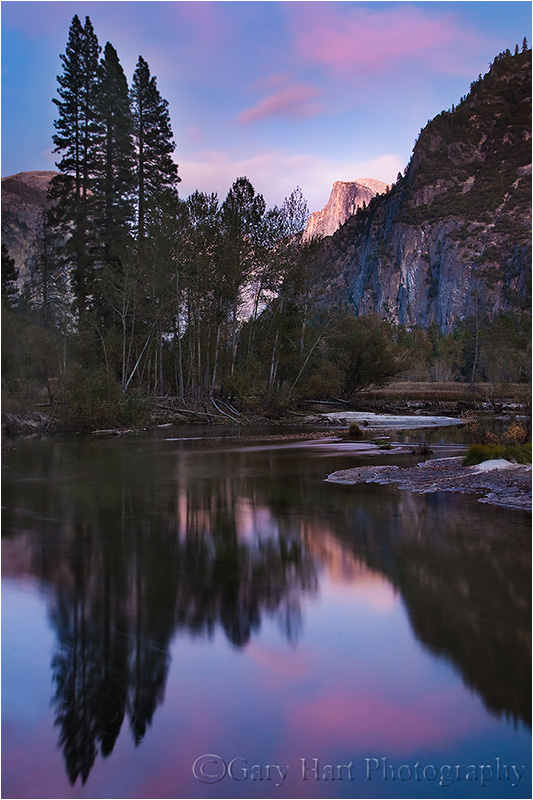 Sometimes I wonder if humans’  inherent need for discovery has been dulled by the proliferation of artificial stimuli. Television, movies, the Internet, and video games are indeed pretty amazing, but if Magellan were alive today, do you think he’d be riveted to “The Discovery Channel” or hunched at his computer, probing Google Earth? If Magellan had a camera, would he be online mining GPS coordinates and posting forum queries requesting suggestions for photographing Delicate Arch, Half Dome, or Antelope Canyon? I suspect 21st century Magellan wouldn’t be satisfied with duplicating the feats of others; he’d be the one navigating uncharted territory no matter what his pursuit.

(As you may have figured out) there are many, many great photo spots in Yosemite. Each year I lead eight to ten photo workshops and classes, not to mention a number of private Yosemite tours. Many of my customers arrive with specific shots in mind, pictures they’ve long admired and wanted to add to their portfolios. I’d be negligent if I didn’t do everything possible to help them get their dream shots, but because I’d be equally remiss if I didn’t encourage them to discover their own beauty, I give them the same challenge that motivates me: Make the “iconic” scenes your starting point, not your objective. In other words, get the shot you came for, then look for ways to make the world uniquely your own.

That can mean exploring new territory, dropping to your hands and knees to look closer, or simply asking “What if?” and making the effort to find out. What’s pretty cool about pursuing discovery is that, for me at least, photography instantly becomes as much about the experience of the world as it is about the images that result. And, my photography benefits. Talk about synergy.

This location I found by simply meandering a trail that parallels the Merced River west of Yosemite Lodge. (I’m not claiming this was a heretofore  an unknown spot, just that it hasn’t made the tourists’ radar yet.) I wasn’t looking for anything in particular, but the relative peace of these excursions are a welcome respite from Yosemite’s often frenetic energy. I  have no idea what motivated Magellan, nor do I pretend to be making significant inroads into the body of world knowledge (yet), but I can sure appreciate his drive to uncover something new, a drive that I’m sure is buried somewhere in each of us.