Glow in the dark 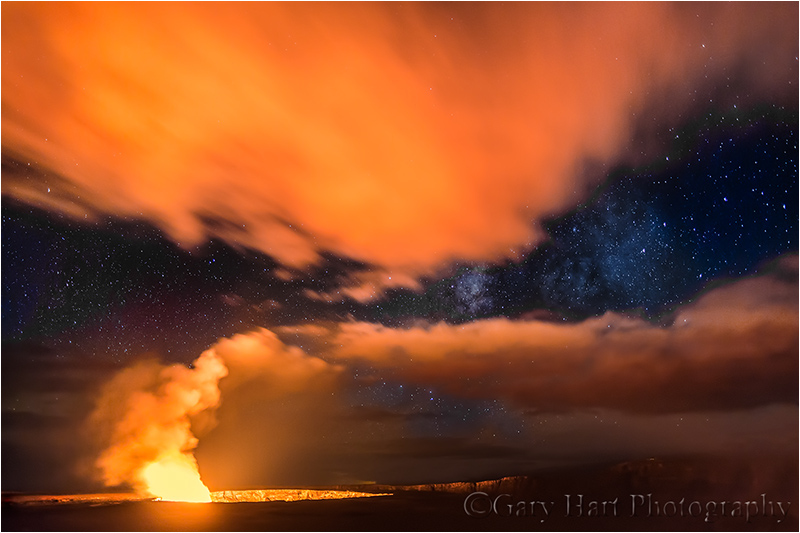 An unfortunate reality of photographing the things I photograph, at the times I photograph them, is the doubt the results foster—“Is that real?” Sigh. That skepticism is compounded by the (understandable) ignorance of people who expect cameras to duplicate human reality, a fallacy no doubt perpetuated by photographers who proclaim each image to be, “Exactly the way the way my eyes saw it.” And then there are those unscrupulous photographers who alter images for personal or financial gain by adding or moving objects (the moon seems to be a popular subject), cranking up the color, and embellishing the hardship the capture required. It’s no wonder people don’t know what to believe.

So let’s take a look at this night shot of the Kilauea Caldera, captured during my recent Hawaii Big Island photo workshop. Is this the way I saw it? Absolutely not. First, my experience was three dimensional. It included wind motion in the caldera’s vapor plume, a dome of sky saturated with thousands of stars, the Milky Way stretching from horizon to horizon, and clouds wafting in and out, intermittently revealing and obscuring parts of the sky. The magic I experienced was far beyond my camera’s capability.

But my camera has reality of its own, and its own magic. By increasing my ISO (the sensor’s sensitivity to light), aperture (the size of the opening that allows light to reach the sensor), and exposure time, I was able to capture more light in one frame than my eyes could see at any instant. All this additional light on my sensor gave me a section of sky containing even more stars than my eyes saw, and clouds fully illuminated by the volcano’s glow.

This particular image was captured on the second of three nights on the rim. My first workshop group nailed it on the first attempt (see my September 9 post), but the second group’s first attempt was largely thwarted by the large cloud you see in this image. Nevertheless, as you can see, we had a small window of opportunity on this night as well, so while the group wrestled with their camera’s and tripods in the dark, I took a test exposure and gave everyone exposure values. As I moved around making sure they all had their settings dialed in and focus set, it was a blast listening to the gasps up and down the rim when the first image popped on each person’s LCD. But once that cloud settled in, the show was pretty much over. After waiting nearly two hours for more sky we packed it in, but by then everyone was hooked, so we returned a couple of nights later to smashing success.

The processing for this image was minimal. In fact, what you see here is pretty much we all saw on our LCDs, with mostly minor tweaks. In Lightroom I brushed a little color temperature reduction to cool the sky, made some slight exposure adjustments, and bumped the clarity to help the stars stand out. In Photoshop I did moderate noise reduction with Topaz DeNoise (love the high ISO performance of my new 5D III) and dodged the underside of the trailing vapor plume a little. And so intense was the color in the clouds that I desaturated the red channel somewhat. None of these adjustments were major, and in fact I was already mostly satisfied with the raw image and Adobe Standard processing (my Lightroom default) that I started with.

The one significant adjustment I did make in Photoshop was to fix the blown highlights at the caldera’s core, at the very center of the fire where it burned hottest, an area the width of the fire in length and about 2/3 of that width high (about 3/4 of the bright area you see beneath the smoke). That core area, while yellow to my eyes, was hopelessly blown (no color or detail) by the extreme exposure the rest of the scene required. To fix it I used Photoshop’s Eyedropper tool to select the yellow just beneath the cooler orange, and the Paint Bucket tool at about 20 percent opacity to replace the pure white with (very) pale yellow.

The objective of any art form is not to show us exactly what we can all see with our own eyes, but rather to expand our perception of reality and and help us see the world differently. While this is not they way my eyes saw it, it is the way my camera saw it (with the one exception noted above). As with a moonbow that’s not visible to the naked eye, streaking stars or blurred water recorded with a long exposure, and the enhanced contrast and shape of a black-and-white image, the camera gives us fresh insights into the natural world. That’s why I choose not to lament perceived “limitations” such as my camera’s inability to capture the range of light my eyes see, preferring instead to celebrate its ability to reveal things my eyes can’t see—in this case faint stars and the fiery, natural light illuminating the clouds and Kilauea’s plume. Nothing can compete with the experience of being there, but I’m thrilled to have images to remind me of that experience, and to show me what my eyes missed.

Join me next September as I try to duplicate this shot in my Hawaii Big Island Volcanoes and Waterfalls photo workshop, September 2-6, 2013.

← And now for something completely different…
Beneath the stars →

2 Comments on “Glow in the dark”