Just a dash of moon…

A new moon debuts this week, and with it some nice opportunities for photographers to accent favorite scenes with a delicate crescent. This morning the diminishing vestiges of the waning moon rose in the east, a couple of hours before sunrise (did you see it?); tomorrow morning, what remains of the “old” moon will be too thin and close to the sun to be seen at all. Thursday night’s sky will be moonless, as the Earth/Moon/Sun alignment puts the moon’s dark side facing us. On Friday the (rejuvenated) moon reappears, this time in the evening twilight, a three percent crescent trailing the sun to the western horizon.

Because it frustrates me no end to see a graceful slice of moon suspended above the landscape when I’m on my way to somewhere else, I now put these lunar milestones in my calendar. When my schedule permits, I’ll schedule a trip around the sunrise or sunset crescent moon, but often I’ll just head up to the foothills east of town.

It helps to know that the more of the moon that’s illuminated, the farther in the sky from the sun it appears (a full moon is exactly opposite the sun, rising at sunset and setting at sunrise). A crescent moon is always in close proximity to the sun, hanging in the brightest part of the post-sunset/pre-sunrise sky, above a (relatively) dark landscape. A camera’s limited dynamic range makes it impossible to photograph a crescent moon against twilight color and landscape detail in a single frame. In these scenes, subtle subjects and fine detail are lost in the dark foreground. Instead, look for strong shapes to silhouette against the colorful twilight sky, or bodies of water that reflect the sky.

For my foothill forays I’ve identified a number of hilltop oaks that stand out against the sky. The best ones for a moon are those that are far enough from my vantage point to allow me to magnify the moon with a telephoto. But even without a telephoto, the moon holds so much “emotional weight” (I’ll need to write about that sometime) that even the tiniest sliver can carry a large portion of the frame.

The tree in the image at the top of this post stands on a ridge south of El Dorado Hills. I come here often, and have a variety of images from this spot that please me (one appeared on the cover of Sierra Heritage magazine a few years ago). When I arrived that evening I feared that the clouds would shut me out, but they turned out to be thin enough to let the moon shine through as the sky darkened. Just a couple of minutes later the thicker clouds rose to obscure the moon, but as they did the pink deepened to a rich crimson and I just kept shooting. 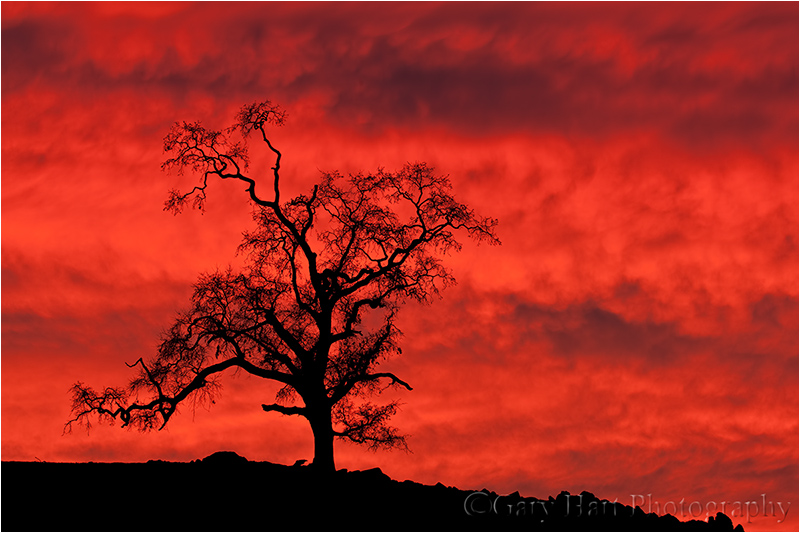 Red Sky, Oak at Sunset, Sierra Foothills  ::  This is one of my last captures that evening, about eight minutes later than the  crescent at the top of the post. To emphasize the fiery red, I slightly underexposed this frame.

← A perfect end to a perfect day
“Trophy” shots →