Returning to the scene of the crime

Clueless. That’s one word that would describe my state the first time I attempted moonlight photography. It was about eight years ago, right here in the Alabama Hills. Though exposure and focus were more guesses than decisions, I ended up with a lucky shot of the Big Dipper suspended above moonlit granite boulders and an obsession was born. 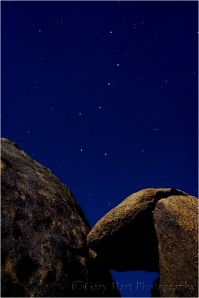 The other thing I remember about that visit was thinking it would be really cool to photograph a full moon setting behind Mt. Whitney (the tallest point in the 48 contiguous United States). That thought got me researching moonrise/set data, and software that would allow me to plot the view angles. I ended up tapping the wealth of tables on the U.S. Naval Observatory website, which, among other things, returned the azimuth (the number of degrees east of due-north) of the moon for any time and location on Earth, and the moon’s altitude (degrees above the flat horizon) at any specified time. Then I stumbled upon a tool in National Geographic Topo! software that allowed me to plot the azimuth and align my photo spot with my subject: I just pick my base point (the location from which I want to photograph) and click on a point on the map at the moon’s azimuth at the time I want to photograph it. The software conveniently draws a line connecting the two points—anything on the line aligns with the moon. Pretty cool (at least at the time—today there are tons of apps that make this much simpler).

Early one morning the following August, armed with ultimate confidence in my new-found knowledge, I embarked on a six hour drive to the Alabama Hills. My goals were two-fold: In addition to a sunrise moonset behind Mt. Whitney, I wanted to photograph the Whitney Arch by moonlight. I arrived late that afternoon, scouted a bit, photographed a rather boring sunset, then traipsed out to the arch in the dark (this was in the days before the trail that guides visitors right to it), about a quarter mile from the parking area, for a moonlight shoot. My continued cluelessness about moonlight photography was exacerbated this time by the fact that, following the lucky shot of my previous visit, I no longer knew I was clueless.

I had fun photographing in the perfect silence of absolute solitude, spent the night in the back of my truck, and woke to find the moon exactly where I’d plotted it. Phew. It turned out that my moonlight image from the previous night was okay, but the years have made me more aware of its flaws: Because focusing on the Sierra Crest was much easier than focusing on the arch, I ended up with just a little more foreground softness than I like. And my exposure was a little darker than ideal. (Flaws that become more apparent the larger the image.) For years I’ve wanted a do-over, and while I’ve been back many times, until last week circumstances have always prevented me from getting out to the arch in moonlight.

There’s really only room at the arch for three or four photographers to comfortably photograph Mt. Whitney through the opening. And when  leading a workshop, my priority isn’t my own photography (one of the reasons I haven’t been able to manage a do-over). But this time only couple of others in my group decided to try their hand at the arch, so I squeezed in and clicked a few frames. I started horizontal, but quickly switched to vertical to maximize the sky (and eliminate a photographer on my left) and soon found a composition that worked. Drawing from experience, this time I focused on the arch, targeting the most distant moonlit spot in my frame. Focus, while difficult, was much easier than my first attempt as I found live-view magnified five times was just clear enough that I was pretty sure I’d found focus (10X was too muddled). But to be certain, I checked the resulting frame, magnified on my LCD, to verify. While the arch was indeed sharp, Whitney was slightly soft at f4, so I stopped down to f8 and bumped my ISO up to 3200. Bingo.

← The cure for blue skies
If you’re following the rules, you’re not being creative →

5 Comments on “Returning to the scene of the crime”