Under the Milky Way 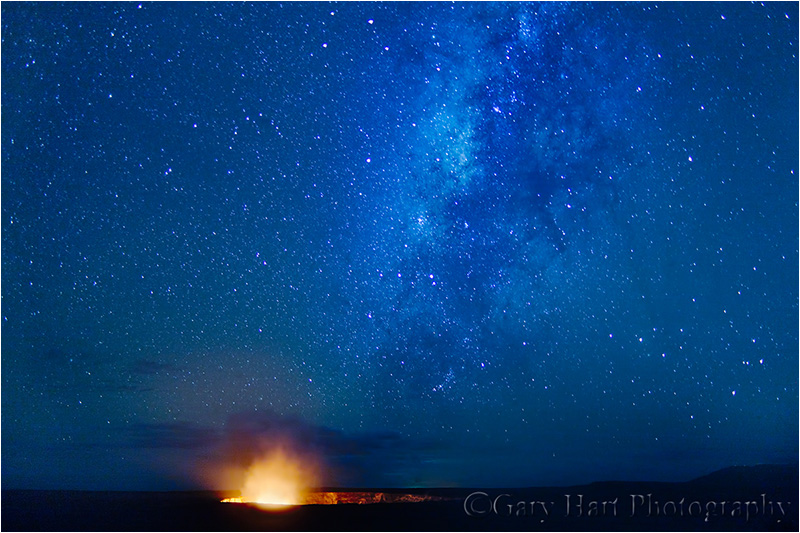 I’m violating a personal rule by posting this image, but I just can’t help it. In this  case it’s my “cool threshold rule,” which states (in the privacy of my own brain) that an image must be more than simply cool to qualify for external exposure. By that I mean, no matter how “cool” a scene, I strive for (and try to share only) images that have a creative component that makes them unique in some way. But rules were made to be broken. And since this was another one of those experiences that I was fortunate enough to share with my workshop group, and because I guided the group in their exposure and composition, I’m certain we all got something similar. So this time coolness trumps art, and here we are….

Wednesday night the workshop group had a fantastic experience photographing Kilauea’s Halema`uma`u Crater from the most popular vantage point, the Jagger Museum. As we shot I gazed longingly at the Milky Way shimmering too far to the right of the caldera to include in the frame with the volcano. But Thursday afternoon I did a little mental figuring and thought I might be able to align the crater and the Milky Way by choosing a different perspective. So I made an executive decision (it’s great to be in charge) and changed the plans for Thursday night from a star shoot on Mauna Kea to another Kilauea star shoot (the stars on Mauna Kea are incredible, but there’s not much for the foreground there). I was gratified that support for my change was unanimous, and off we went.

My first stop Thursday night was the Kilauea Iki vista. We arrived to find the stars obscured by clouds and the caldera no more than a distant ember, but within minutes the clouds parted (yay!) to reveal the Milky Way too far left–I’d overshot the adjustment (boo!). Before people could drag out their gear, I herded the group back into the cars and headed for the steam vent vista, about ten minutes away and a little up the road from the Jagger Museum, (silently) optimistic that angle would just about split the difference and put us exactly where I wanted to be. On the trail to the steam vents I didn’t have to walk far to know that we were in luck–there was the Milky Way, in all its pearly splendor, dangling perfectly above the caldera’s glow.

Witnessing a volcano creating brand new earth, against a black sky teeming with stellar pinpoints that have traveled hundreds or thousands of years, is mind numbing. And watching the first image pop up on my LCD is pure euphoria. After helping those who needed it find focus, I gave everyone the exposure values and just stood back, letting each person’s gasp tell me all was well. Pretty cool.

← Sunrise on the rocks
Over the volcano →

14 Comments on “Under the Milky Way”