This week I’ve spent some time going through past images that I just haven’t had time to get to. Unlike many of the images I uncover by returning to old shoots, this one from the final night of my October 2010 Eastern Sierra workshop wasn’t a surprise–the sky over Half Dome that night was magic, something I’ll never forget. Shortly after returning home I selected and processed one, but in conditions like that I always shoot enough variety of compositions that I knew there must be more there. While I have a general rule to only select one image of any scene from a single shoot, this is a perfect example of why I refuse to be bound by rules. 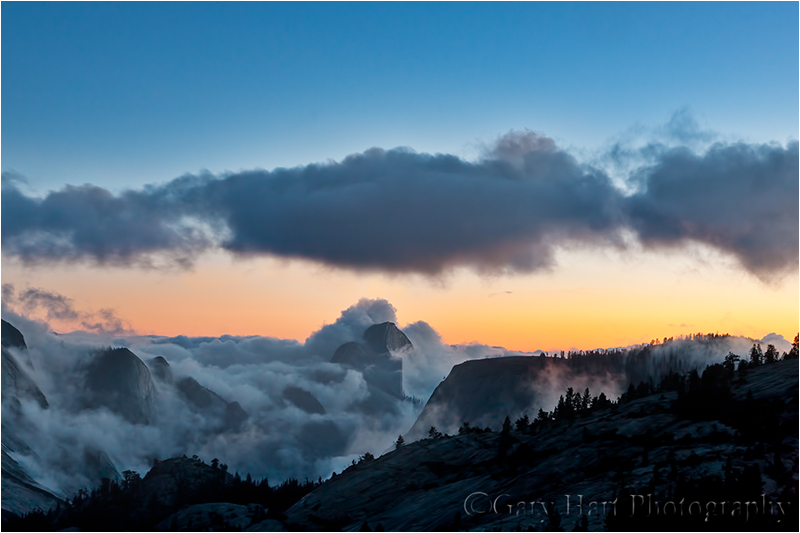 Comparing the two images from that night, what strikes me most isn’t the similarity, but the differences. Despite being captured less than a minute apart, they illustrate creative choices that underscore a point I keep hammering on: Photographers are under no obligation to reproduce human “reality” (because it can’t be done). Because photographic reality is an impossible moving target, my obligation as a photographer is to my camera’s reality. And if I do things right, I can use my camera’s reality to transcend visual reality and convey some of the emotion of the moment.

So, in the “Emergence” (tight vertical) composition, I chose to emphasize Half Dome’s power and nothing else. I centered Half Dome and exposed for its granite face, letting the swirling clouds darken and the foreground go completely black. The dark clouds above Half Dome cap the top of the scene–there’s really nowhere else for your eye to go than Half Dome.

Today’s “From the Clouds” composition is more about the moment’s grandeur. I widened the perspective considerably and brightened my exposure enough to encourage your eye to wander about the frame a bit. There’s no question as to where your eye will end up, it just takes a little longer to get there. In other words, expanding the perspective and providing more light invites you to leave and return to Half Dome at your leisure.

Did I consciously plot this that night? Nope. Honestly, I’m rarely this analytical when I shoot–I just don’t want my left (logical) brain to distract my right (creative) brain. But I do believe that if you cultivate (and trust!) your intuition, creative decisions like this will happen organically. (But learn metering and exposure until it becomes automatic!)

So while I had no conscious thought of how to control your experience of this scene, I’ve done this long enough to know that these creative choices don’t just happen by accident. Without getting into the divine intervention claims trumpeted by some photographers (label it what you will), I believe everyone can access untapped creative potential that takes them far beyond what can be accomplished with the conscious mind. And it starts with trust.

BTW—I prefer the first one (Emergence).

7 Comments on “Trust your instincts”