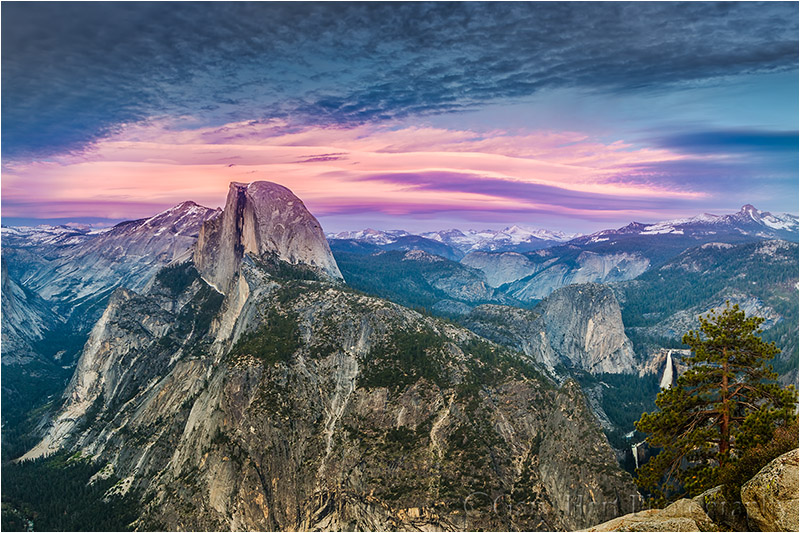 Some of my oldest, fondest Yosemite memories involve Glacier Point: Craning my neck from Camp Curry, waiting for the orange glow perched on Glacier Point’s fringe to grow into a 3,000 foot ribbon of fire; stretching on tiptoes to peer over the railing to see the toy cars and buildings in miniature Yosemite Valley; standing on the deck of the old Glacier Point Hotel my father’s breathless excitement at the sudden shimmering rainbow arcing across Half Dome’s face.

The National Park Service doused the Firefall in 1968 and my father died almost eight years ago. While El Capitan’s Horsetail Fall delivers a no less spectacular (albeit less reliable) February show across the valley, and my father’s rainbow image is a vivid reminder on my mom’s living room wall, those Glacier Point memories are irreplaceable.

Glacier Point closes with the first significant snow each fall, and doesn’t open until the snow melts in late spring–avoiding summer’s crowds and interminable blue skies means I don’t make it to Glacier Point much anymore. So I was thrilled to learn that this year’s dry winter enabled the NPS to open Glacier Point on April 20, early enough for me to share it with last week’s workshop group.

Because I already had plans for Mirror Lake, moonrise, and moonlight photography later in the workshop, I decided that the workshop’s first sunset was the best time time for the Glacier Point trip. Stopping first at Washburn Point just a short distance up the hill, we were treated to a harbinger of what was to come later–a mix of wave clouds and alto-cumulus above the Sierra crest to the east, and wonderfully warm light on Half Dome. Not knowing how long the light would last, I hustled the group to Glacier Point, arriving soon enough to get a front row seat for what turned out to be the best sunset experience I’ve ever had at Glacier Point.

The light held out all the way to sunset, warming from amber to pink and finally red, painting the sky and saturating the granite landscape with shades of magenta. As it turned out we had many other photogenic moments (dogwood, a moonbow, and the rise of the “super” moon above Yosemite Valley) in the workshop’s remaining three days, but this sunset on Glacier Point will be my fondest memory.

That’s Half Dome front and center, Cloud’s Rest behind it to the right, and Nevada (top) and Vernal Falls in the lower right.

← Returning to the scene of the crime
Photographic reality: Your camera’s vision →