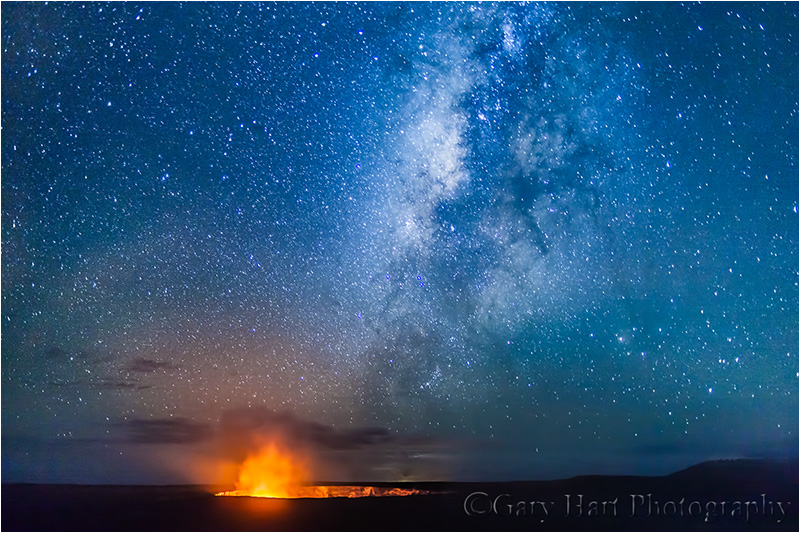 Even with the number beautiful things I get to photograph, certain natural wonders will forever thrill me. Near the top of that list is the view into the Kilauea Caldera on Hawaii’s Big Island. I thought I knew what to expect, but even after a lifetime of National Geographic specials and an occasional “Breaking News!” disaster video, I was little prepared for the in-person experience of peering into an active volcano.

Approaching Kilauea from Hilo, the first sign that something unusual is in store is the plume of thick smoke and vapor rising in the distance and spreading with the wind. If you didn’t know a volcano was nearby, you might mistake the smoke for a forest fire. The billowing plume becomes more prominent as you draw closer to the volcano, and once in Hawaii Volcanoes National Park you’re soon surrounded by white puffs of steam rising from the ground on both sides of the road.

On the drive to the caldera you’ll be tempted by several vista opportunities, but the best perspective is from the Jaggar Museum at the end of the road (the loop road that once circumnavigated the caldera is now closed at the museum due to the risk of noxious fumes beyond). For first-time visitors I recommend foregoing the preliminary views in favor of the Jaggar view, which makes the most impactful first impression—you can return to the other views on the drive out.

When visiting during the day you’ll see white smoke pouring from a large hole on the caldera’s floor, but no sign of orange flame—the sunlight simply overpowers the volcano’s fire. While any view of a volcano is memorable (trust me), nothing compares to the experience of seeing the caldera after dark. I usually arrive at the caldera in time for sunset, go to dinner, then return once darkness is complete. Not only does this break allow time for darkness, I also find that the clouds that frequently obscure the sunset sky dissipate once the sun is down (in other words, don’t forego a night visit simply because your daytime visit was cloudy).

Even if you do find clouds after dark, the clouds beautifully radiate the caldera’s glow to bathe the entire scene in orange, a subtle effect to the naked eye that comes alive in a long exposure. If you’re lucky enough to visit on a night with few or no clouds, you’ll be treated to the churning lava’s orange fire, reflected by belching white smoke, beneath a sea of stars. My first time seeing the caldera beneath the Milky Way I literally gasped, and it was several seconds before I realized I was holding my breath. Breathtaking indeed.

Let me add that finding the Milky Way above the caldera isn’t without its difficulties. Even if the clouds cooperate, simply showing up at the Jaggar Museum after dark isn’t enough because the properly aligned vantage point varies with the date and time of night you visit. In the Northern Hemisphere the best views of the Milky Way are moonless summer nights (moonlight washes out the sky as much as city lights). If you find yourself there with the Milky Way visible, aligning it with the caldera is usually a matter of driving or walking the rim until you find the spot.

We’ll be photographing the Milky Way above Kilauea in my upcoming Hawaii Big Island workshop is September 2-6. While it filled several months ago, a recent cancellation leaves me with one opening. And I still have lots of openings in my 2014 Hawaii workshop, September 15-19. 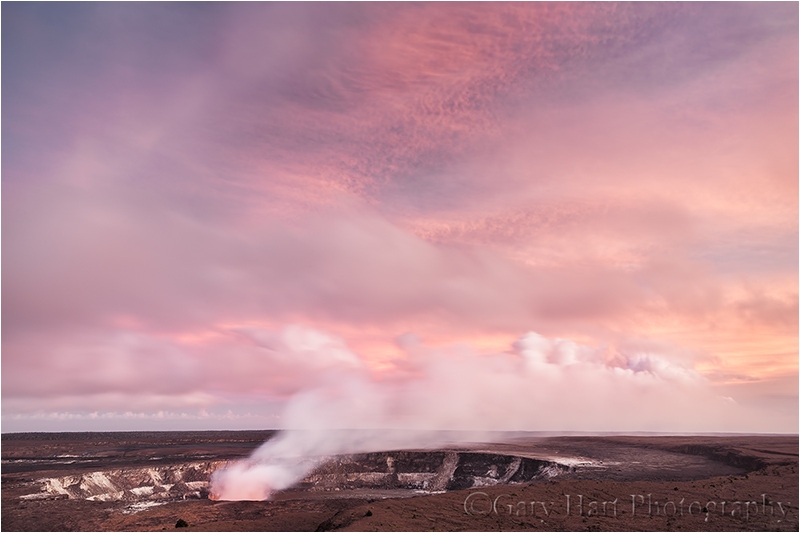 Earth on Fire, Kilauea Caldera, Hawaii :: The sunset light had dimmed just enough that the lava lake’s fiery orange is just visible. Even just few minutes earlier the scene was too bright to see any color in the caldera. 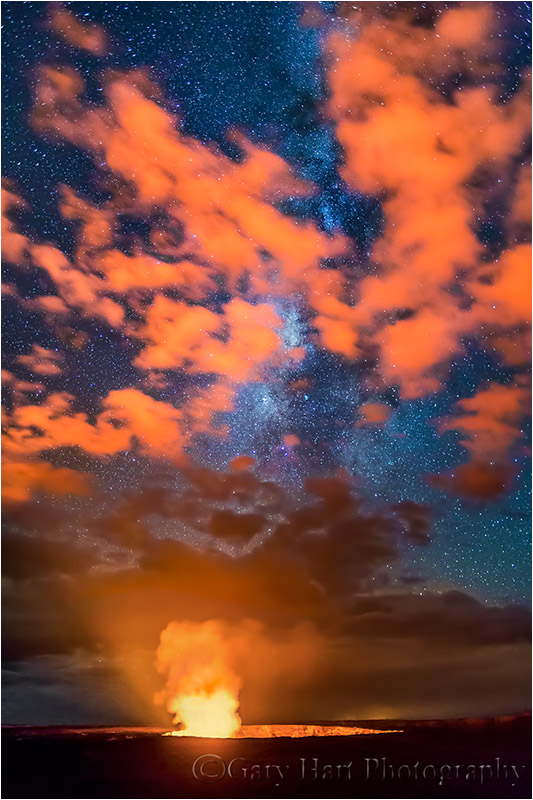 ← Looking on the bright side
One part plan, one part serendipity, one part impulse →