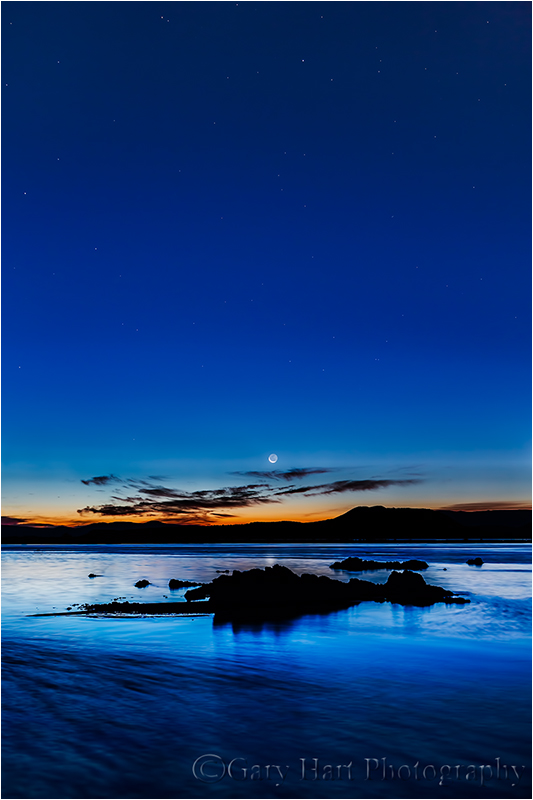 It’s dark. It’s cold. It’s early—so early that some would still consider it late. But you drag yourself out of bed anyway, for the promise of something most people never experience. And experience is the operative word here, because it’s much more than just the view. Or the photography. It’s the opportunity to witness the transition from night to day, to bask in a quiet that’s impossible in our metropolitan mayhem, to inhale clean, chilled air, and to watch the rising sun’s warm hues push back Earth’s indigo shadow to devour the twinkling vestiges of night. Of course you can watch this happen in reverse after sunset, but it’s just not the same in a world has been lived in for a dozen or so hours.

I’d scheduled this year’s Eastern Sierra workshop to conclude on the one day each month when a sliver of moon floats in the transition between night and day. To photograph the moon this small and close to the sun, I try to be in place an hour before “official” sunrise (the posted sunrise time, when the sun would crest a flat horizon), when darkness still predominates. With a five mile drive on a rugged, unpaved road, and a half mile (or so) trail-less walk through sand and mud, I got the group on the road at 5:15 for our 7:00 a.m. sunrise. Despite some blurry eyes, there was no grumbling; and by the time we were ready to trek to the lake, everyone was in great spirits.

On this morning Mother Nature rewarded us by chasing away the clouds that had dogged the horizon the last couple of days. These clouds had given us brilliant color, but had also preempted our night photography shoot just ten hours earlier; I was concerned that they’d obscure the moon I’d been so looking forward to. No problem—in the clouds’ place we found this two-percent slice of old moon, one day removed from new, just as I’d ordered. Phew.

Because this was the last day of the workshop, everyone had pretty much mastered the difficulty of exposing for a dark foreground beneath a bright horizon—some blended multiple exposures, others reached for their graduated neutral density filters—allowing them to concentrate on creativity. I tried a variety of compositions, horizontal and vertical orientations from wide to tight, and encouraged the rest of the group to do the same (though I suspect that by now they’d all learned to tune me out).

This is one of the first images I captured that morning. It was still dark enough that the amount of light required to bring out any detail in the foreground also revealed lots of lunar detail in the earth-shadow, and stars still pierced much of the sky. Nice. To ensure that I didn’t get motion blur in the moon, I made some compromises: I dropped to f5.6 (depth of field wasn’t a concern, but lenses are slightly slightly less sharp as the approach their extreme apertures) and bumped to ISO 800 (with my 5D Mark III and today’s noise reduction software, noise at ISO 800 is no longer much of a concern). For most of my images that morning I used a two-stop hard-transition graduated neutral density filter to subdue the bright horizon, but this was one of my earliest images, captured before that was necessary.

The group was pretty quiet for most of this sunrise, usually a sign that they’re pretty happy with what they see and the images they’re capturing. Every once in a while I’d answer a question, or offer suggestions, but it seemed like people were pretty much “in the zone.” Nevertheless, I did pause couple of times to remind everyone not to get so caught up in their photography that they forget to appreciate what we’re witnessing.

These ephemeral moments in nature change subtly but quickly—soon the stars disappeared and moon faded into the advancing daylight. By the time the sun crested the horizon, our attention had turned to the warmly lit peaks behind us. And then it was over.

13 Comments on “Night and Day”