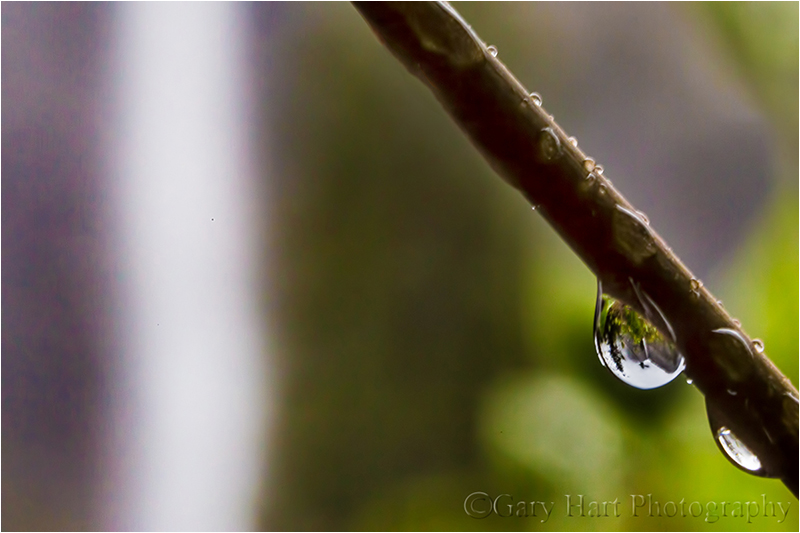 I probably worked harder capturing this image than any other image I’ve ever photographed. Worked hard not in terms of physical exertion, but rather in patient pursuit over several years and painstaking execution in difficult conditions. Photographed late last month in Yosemite, this image is something I’ve visualized and actively sought for years. While I have no illusion that this image will be as popular as some of my more conventional images, it makes me so happy that I just have to share everything that went into its capture.

Visualize: The world in a raindrop

I can trace this image back to a spring afternoon a few years ago, when I was doing macro photography in a light rain. My subject was poppies, and peering through my viewfinder I particularly loved the clarity of the raindrops when they snapped into focus. At home on my monitor I magnified one of the images to something like 400% and saw the entire scene surrounding me was inverted in that tiny droplet. The fact of this wasn’t new to me, but actually seeing it up close planted a small seed that bloomed into an obsession I’ve been chasing ever since. I realized that getting even closer to a raindrop might allow me to enlarge its internal scene enough to make it visible without magnification. From that thought it was a short jump to the idea of finding a raindrop that contained a scene others would recognize.

Pursue: If at first you don’t succeed…

Unfortunately, the onset of my raindrop quest coincided with a drought that severely limited my access to raindrops (and if you know anything about me, you know it has to be an actual raindrop—no spray bottles for me). And then there are the daily distractions of running a business, and the fact that many of my trips to prime locations are for workshops, when the time and attention a shot like this requires precludes me from trying it.

Nevertheless, over the last several years I’ve played with my idea when opportunities presented themselves. These experiences allowed me to determine that 100mm macro wouldn’t get me close enough, that I’d need to add multiple extension tubes. And the extremely narrow depth of field that comes with focusing this close would require a very small aperture to get enough of the frame sharp.

These early attempts also enabled me to identify and practice overcoming a few physical challenges: low light, caused not only by the overcast skies, but also by the extension tubes (extension reduces the amount of light reaching the sensor); wind, almost always present in a rain; and a tissue-thin focus plane (even at a  small aperture) that severely shrinks my margin for error. I knew going in that it would be difficult, but with each attempt I had to admit that this shot might be even harder than I’d decided it would be the last time I tried it. Of course that’s half the fun.

A couple of weeks ago the (always reliable) weatherman called for an all-day rain in Yosemite. Perfect. Knowing the dogwood were blooming, I freed my schedule and made the 7+ hour roundtrip to Yosemite, leaving early in the morning and returning that night. The raindrop shot wasn’t my sole objective, but it was up there on my list. Unfortunately, while I ended up having a pretty good day, my “all-day” rain stopped about an hour into my visit and I was left to pursue other opportunities.

Undeterred, when the (almost always reliable) weatherman promised more rain a couple of days later, back I went, this time meeting friends Don Smith and Mike Hall. Did I mention that I wanted rain? Well, rain it did. Hard. All day. Donning head-to-toe rain gear, I managed to stay dry, but my equipment wasn’t quite so lucky—without a third arm my umbrella wasn’t much use during the compose/meter/focus phase and the small towel I’d brought to dry things off was completely saturated by the end of our first stop (I should have known better). After that I pretty much contented myself with drying my my lens element just before shooting, trusting (hoping) that my reasonably water-resistant gear would survive—if I wanted to keep shooting, I had no other choice.

As good as the shooting was, by mid-afternoon the three of us were ready to submit to the weather and head for home. But, with my raindrop shot gnawing at the back of my mind, on the way out I suggested a quick stop at the view of Bridalveil Fall on Northside Drive. I’d stopped here on Tuesday and knew the dogwood that hadn’t been quite ready for primetime then would be just about right now. So stop we did (it didn’t take lots of arm twisting).

While Don and Mike (why does this sound like a drive-time radio program?) went off in search of their own vision, I bee-lined to the “perfect” dogwood I’d identified on Tuesday. But getting a shot like this isn’t just a matter of going out in the rain at a beautiful location. (Full disclosure: there was a time when I believed it might just be.) And in my zealous pursuit, I’d conveniently discounted the difficulties I’d need to deal with:

Okay, so maybe this won’t be such a quick stop.

After taking stock of the physical difficulties, I attached all three of my extension tubes (72 mm total) to my 100 mm macro lens and scanned the flowers, branches, and leaves for a raindrop that was both large enough to hold the scene (without extreme distortion) and whose long axis (the wide side) was perpendicular to my line of view to Bridalveil Fall. No small feat.

The frustration started immediately: When I did indeed find the “perfect” drop, I realized getting to it without touching the tree (thereby rearranging all its drops) would require powers far beyond my superhero grade. And so it happened that once I navigated “inside” the tree’s canopy to my raindrop, the raindrop was long gone and I had to start over.

Okay, at least I was inside the tree—progress. I ran my eyes along the nearby branches until suddenly, there it was—another perfect (there’s that word again)  raindrop dangling from a diagonal branch about 18 inches in front of me. I very carefully maneuvered in its direction, using contortions that might best be described as a hybrid of moves from the party games Twister and Limbo, moves I hadn’t broken out since my (far more limber) college days. (Picture a heist movie where the cat-burglar has to avoid a matrix of electric eye beams to get to the jewels.)

This particular raindrop was about eight inches above my head. Fortunately my new (and wonderfully tall) tripod was up to the task—I extended its legs until my lens was just an inch or two from the drop and began the painstaking process of composing and focusing. With my viewfinder higher than my eye could reach, this part would have been impossible without live-view; with live-view it was a pain but doable.

I found my basic composition fairly quickly, but my ridiculously thin focus plane shifted every time the breeze or nearby raindrop-strike jostled “my” raindrop. Focusing not on the raindrop, but the scene within the raindrop, I waited for a brief lull in the breeze and nudged my focus ring until the equilibrium point around which the drop vibrates was sharp. Then I magnified the drop and waited for the next lull to confirm sharpness. After several attempts I was reasonably confident I was ready to proceed.

Stopping down to f22 with three extension tubes forced me to bump my ISO to 1600 to reach the 1/30 second shutter speed I thought I could get away with. Even this would require timing my shutter for another lull in the breeze, but the alternatives—a larger aperture which would reduce my DOF, or higher ISO that would increase the noise—I wasn’t crazy about.

You’d think after all this I’d be ready to shoot. You’d think. But by now (in case you forgot, it’s still raining) my front lens element was festooned with raindrops. And wiping the lens dry did little good because the slightly upward angle of view oriented my lens ideally for capturing more raindrops. So I extracted the collapsed umbrella I’d proactively jammed in a jacket pocket and carefully threaded it skyward, carefully negotiating the network of overhanging branches without disturbing my raindrop, until the umbrella was in a open space wide enough to unfurl. Open umbrella in my right hand, with my left hand I was able to dry with a small, dry lens cloth I’d also had the foresight stuff in a pocket.

One of the downsides of the “perfect” raindrop is its large size, which gives it a rather inconvenient relationship with gravity. So. After all this preparation and just as I raised my remote release for my first click, my raindrop grew tired of waiting and plunged groundward. True story. Fortunately, an  advantage of getting intimate with raindrops is the insight that they tend to reform in the same place. I took a deep breath—with my composition, focus, and exposure already set, I decided to wait (still contorted between branches beneath my umbrella) for the next drop to form. And sure enough, within a couple of minutes I was back in business.

I clicked a dozen or so frames, checking the focus after each, refining the composition slightly, and occasionally varying my exposure settings until I was confident that I had enough frames to give me a pretty good chance of at least one successful image. I probably would have worked on it even longer, but my muscles really were starting to cramp and I figured Don and Mike were ready to move on anyway. Back at the car a cursory run through my images on my LCD was enough to give me hope that I’d achieved my goal, but it wasn’t until I got them home on my large monitor that I was ready to proclaim success.

Most of the images had very slight but nevertheless fatal focus problems—slight motion blur or barely missed focus point—all I needed was one. And this is it.

So what did I end up with? The white stripe on the left is Bridalveil Fall in full spring flow. The branch belongs to my young dogwood tree; behind it are dogwood leaves and new (still greenish) flowers. And inside the raindrop is Bridalveil Fall, Cathedral Rocks, and Leaning Tower. But wait, there’s more: I’d actually had been working on the image a little while before looking closely at the black shape above Bridalveil Fall and realizing that a raven had flashed into my scene at the instant I clicked (it’s in no other frame). Pretty cool.

← Do your homework
Glacier Point moonrise →