The cure for the summertime blues 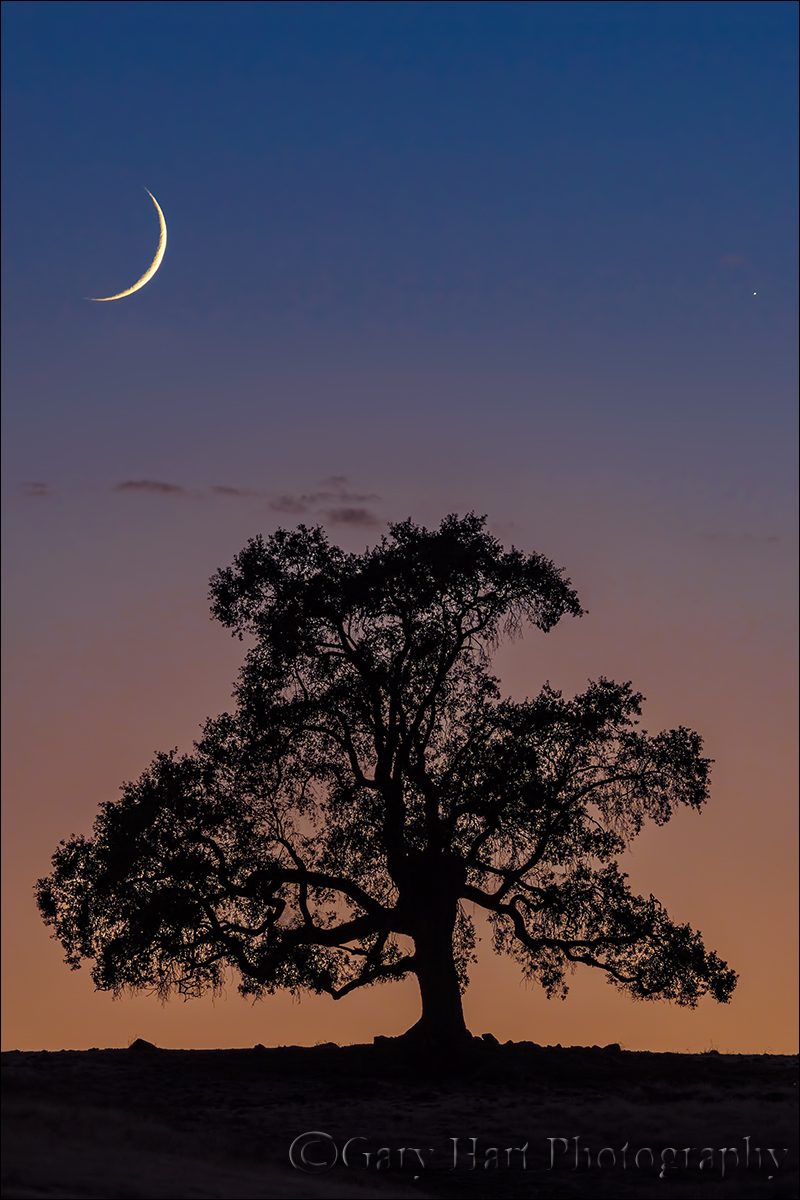 There are many great reasons to be a landscape photographer in California. Summer isn’t one of them. Most people find California’s benign whether appealing—our mild winters and dry summers are one of the Golden State’s prime attractions. But to photographers, blue skies are boring, and California’s summer skies are nothing if not blue.

We say goodbye to our clouds in May, and I go stir crazy waiting for their return in October. One summertime solution is night photography, which requires clear skies. As an added bonus, summer’s warm temperatures make fumbling with camera gear and standing around in the dark much more tolerable, and the Milky Way’s bright center is very much a summer feature. California’s dense population means extreme light pollution through much of the state, but our proximity to mountains make escaping the light relatively easy in summer.

Because I can’t always make it to the mountains, I’ve found other photo opportunities in the foothills closer to home. The wildflowers of spring are gone, and the sun has burned the once green grass a golden brown, but the foothill’s oak trees are reliable silhouettes against the colorful twilight sky. Once upon a time I was satisfied with simple silhouettes, but in recent years I’ve made an effort to include a crescent moon in my foothill oak silhouette scenes.

A crescent moon only appears in close proximity to the sun, hanging in the brightest part of the post-sunset/pre-sunrise sky, above a (relatively) dark landscape. The more of the moon that’s illuminated, the farther in the sky from the sun it will hover (a full moon is exactly opposite the sun, rising at sunset and setting at sunrise). Since a crescent rises and sets just before or after the sun, there’s not a lot of time when it’s above the horizon and the sky is dark enough for its thin outline to stand out.

Getting a crescent moon to align with my foreground subjects is all about timing—for example, some months a new moon follows the sun too closely, dropping below the horizon before the sky has darkened enough to reveal it. The next night the moon lags so far behind the sun that that getting it in the frame with my subject before the sky darkens too much requires a moon-shrinking wide angle lens. As much as I enjoy accenting a scene with a small crescent, I truly love photographing the moon large.

My most recent attempt came last Thursday, a day I’d circled in my calendar several months ago after calculating that the moon would be in the perfect twilight window—not too low or too high—for my favorite trees. My brother and I started the evening at a location with a lower horizon so we could photograph the sun setting into the trees (I blogged about that shoot last week), then zipped up the road to a spot that I’ve been photographing for years.

Sometimes I can photograph this scene from the road, but in summer the new moon sets so far north that we had to angle a little south and climb one small hill and circle another to align it with the trees in the distance. Aligning the trees and moon enabled me to shoot the entire scene with my Tamron 150-600 and Sony a6300 for maximum magnification.

There are actually two trees side-by-side atop this distant hill, but I had so much magnification, I could only photograph one at a time. I gave both trees equal time—today’s image came early in the shoot, when the moon aligned better with the left-most tree. As the moon descended to the right, I eventually turned my attention to the other tree.

Regardless of the tree I was working on, I moved around a lot, left/right and up/back, dodging cow pies, to balance the moon and tree in the frame and find a relationship that worked. By ascending a small hill behind me, I was even able to extend the shoot a few minutes before the moon finally disappeared.

It would have been very easy to stay home and do something else that night. I know these simple images aren’t big money makers, and summer moon and oak silhouettes may not be as spectacular as Yosemite Valley covered with snow, or a rainbow above the Grand Canyon, but I find photographing them no less personally rewarding. (I already can’t wait until next month.)

One more thing: See the small dot of light on the right, at about the same level as the moon? That’s Mercury, another sun-hugging visitor only visible in the dawn or dusk twilight glow. 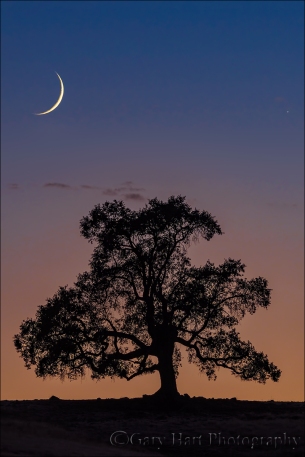 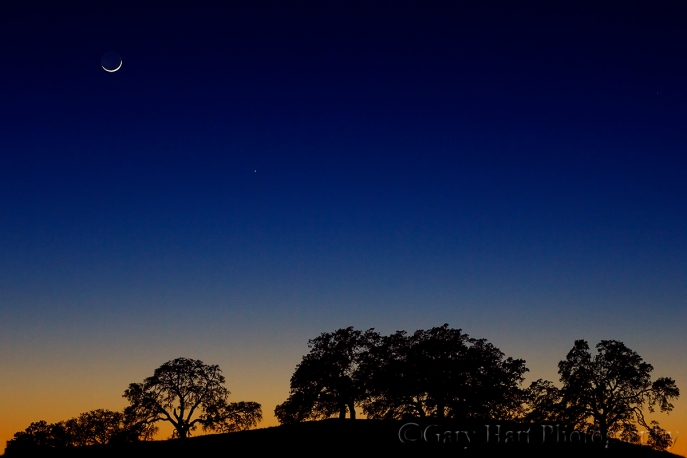 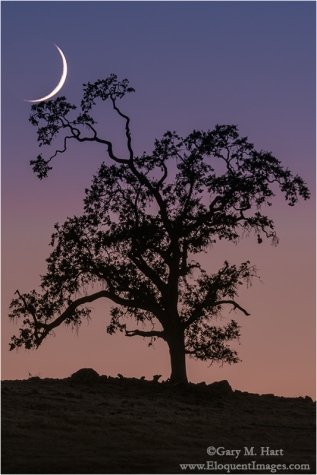 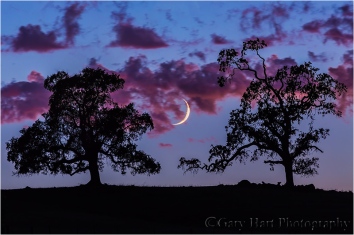 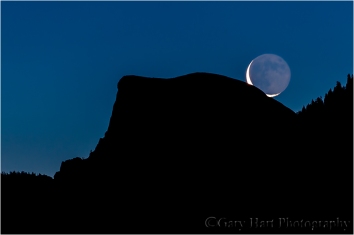 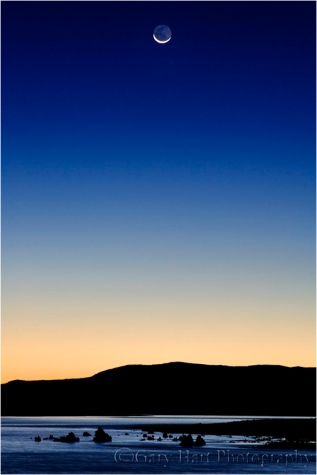 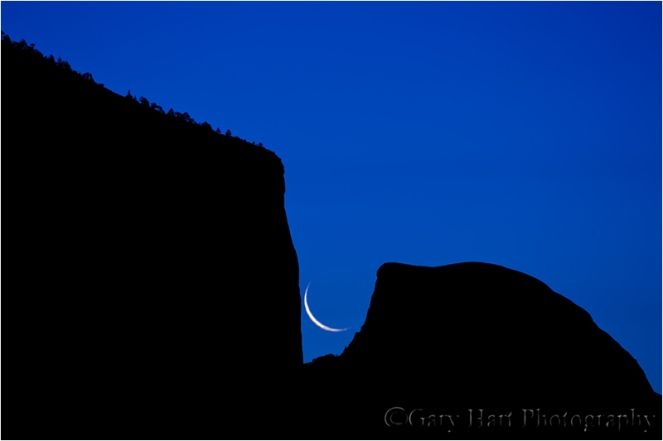 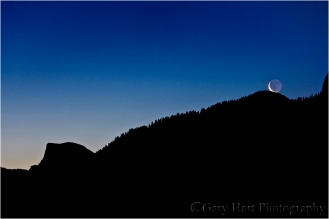 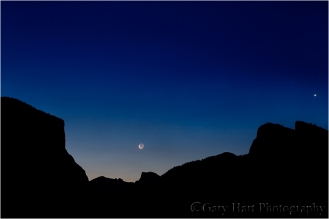 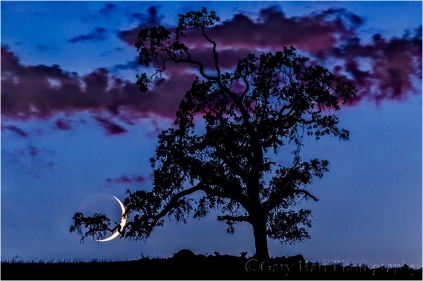 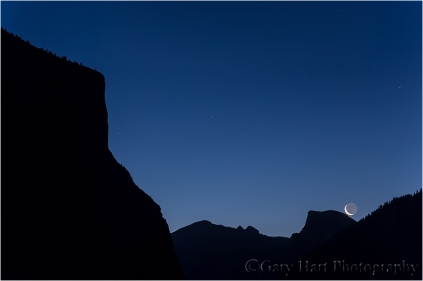 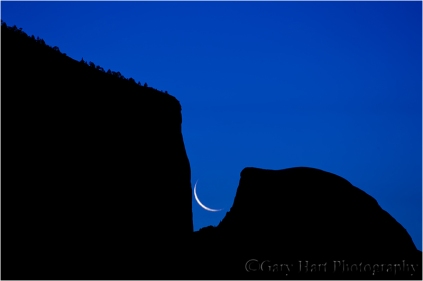 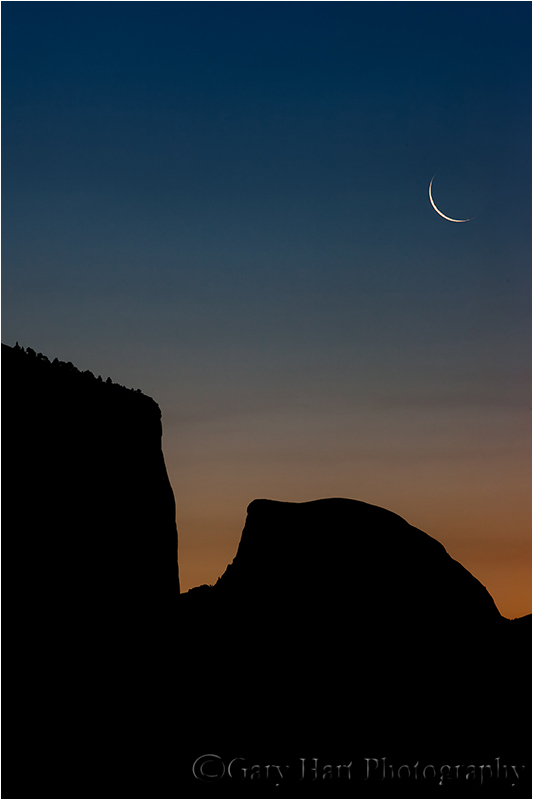 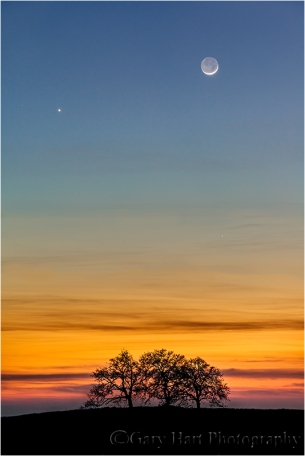 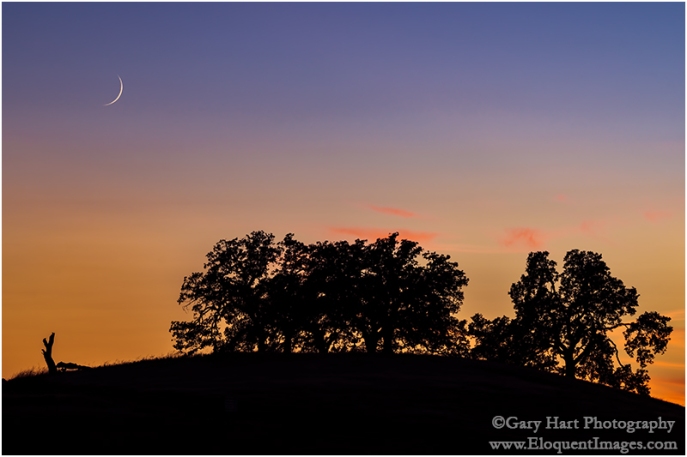 ← The night sky and me
Less sky, more canyon →

6 Comments on “The cure for the summertime blues”