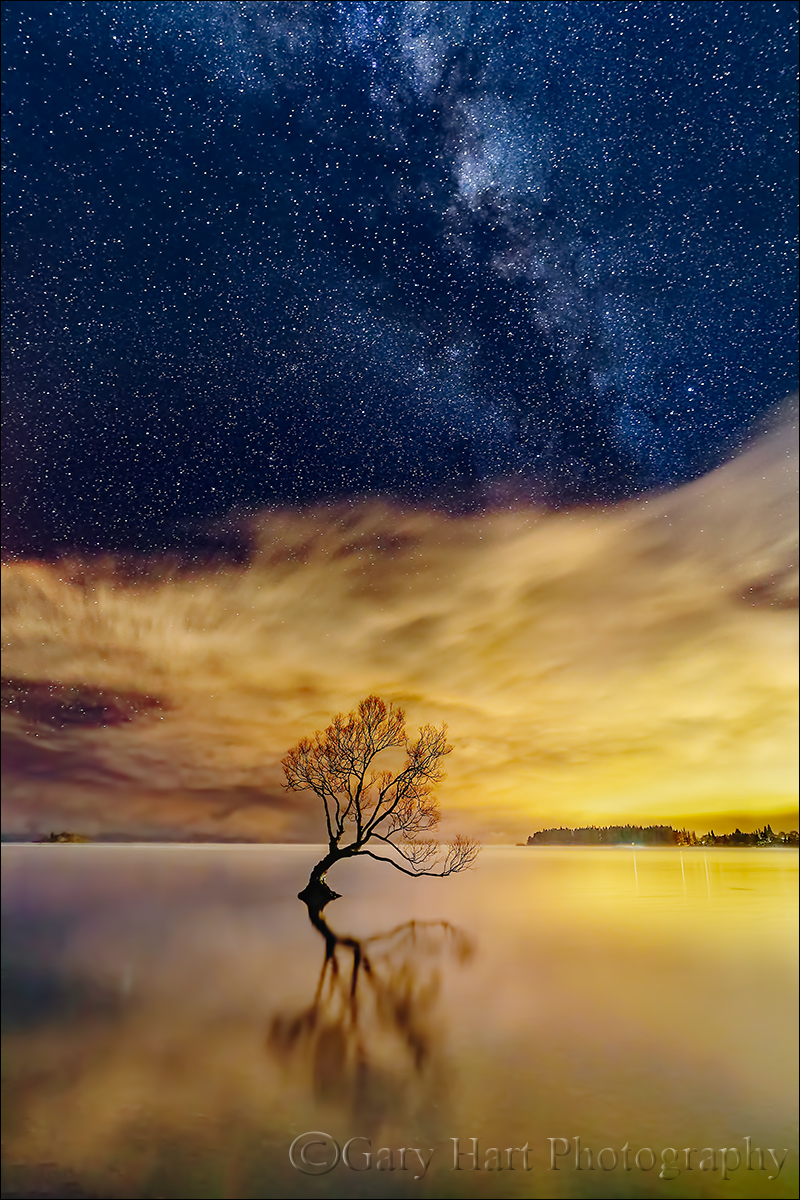 After one of the most exhausting, exhilarating, and just plain productive photography days of my life, our van rolled into Wanaka a little before midnight and everyone’s thoughts, including my own, were on sleep. But the stars were out and the moon was not (yet), and I knew it would be at least a year before I’d get another chance like this. With a warm bed and blissful sleep beckoning, was I really going to go back out to the lake in the frigid dark for the second time that day? You betcha.

Just what could inspire such craziness? Driven by more than a nice photo opportunity, I’d been infused with the infectious energy of a dozen young, Sony-sponsored social media influencers: the Sony Alpha Imaging Collective (AIC). (It would be doing them a disservice to label them mere photographers.) After spending months arranging this trip on Sony’s behalf, my ostensible role for its execution was as a guide and mentor. But the aggressive creativity of these visual artists was an inspiration to this conventional photographer’s vintage muse, and I can’t imagine that I was able to offer them nearly as much as they gave me.

So, with the Health app on my iPhone reporting that I’d already logged 9 miles and climbed the equivalent of 58 flights of stairs, I found myself standing alone, in icy lake water, photographing something I’d vowed I’d never photograph. So how did I get here? 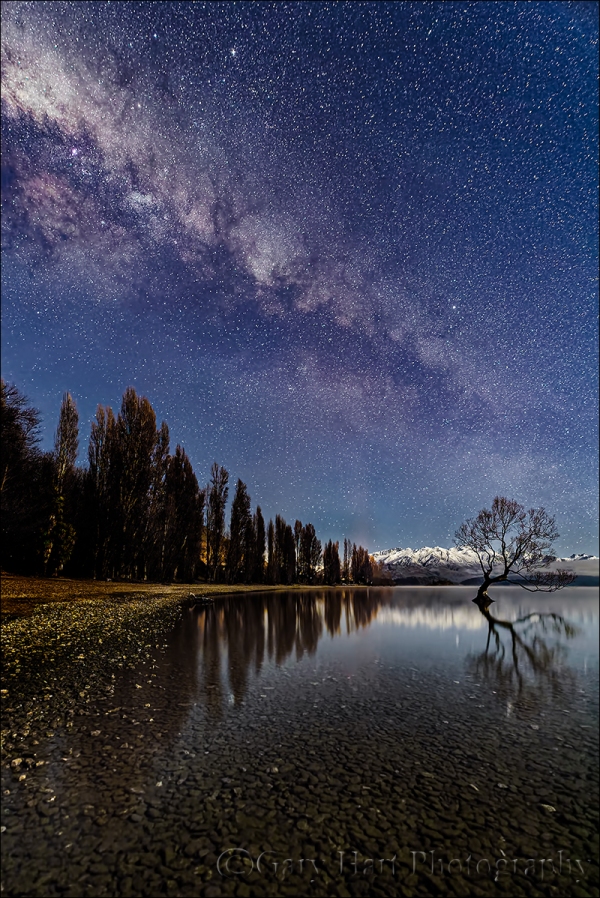 When my alarm went off at 3 a.m. that morning, I’d staggered from bed without high expectations. This wasn’t the first time I’d tried rising photograph the Milky Way above the lone willow in Lake Wanaka, but I’d always been thwarted by fog. This morning, instead of another foggy reprieve and a few more hours of welcome sleep, the stars were out.

Despite a 48% waning gibbous moon, the Milky Way was clearly visible and I photographed for about an hour with three or four others from the AIC group. Having never photographed the Milky Way here, I made mental notes for how it could be better the next time. First, the galactic center was a little left of the tree and quite high. And the moon, while adding light to the foreground, washed out the sky a little too much.

Note to self: Next time, come earlier and make sure the moon isn’t up. 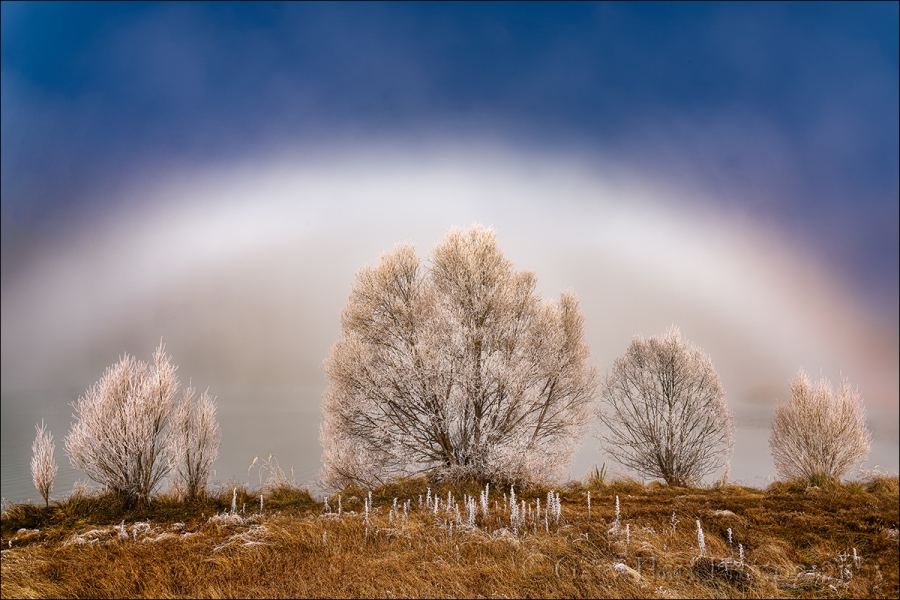 The three hour drive from Wanaka to Aoraki / Mt. Cook National Park had been slowed by a detour, a couple of unplanned stops, and now dense fog. With at least an hour’s drive and a full photography schedule ahead head of us, we couldn’t really afford to stop. But… Oh. My. God. Look at those trees, glazed with hoarfrost and shrouded with fog… The visibility was so limited, by the time the scene popped out of the fog we were past them, but when a simultaneous command issued from every seat, “Stop the van!”, stop we did. (It didn’t hurt that our driver was a photographer too.)

Doubling back, we poked along the shoulder until we found a narrow, unpaved road on which to park, then sprinted toward the trees—which turned out to line a small lake. Wow. The next hour was some of the most magical photography I’ve ever experienced. When the fog started to thin, the sun broke through, framing the trees with a shimmering fogbow that I just had time to capture. 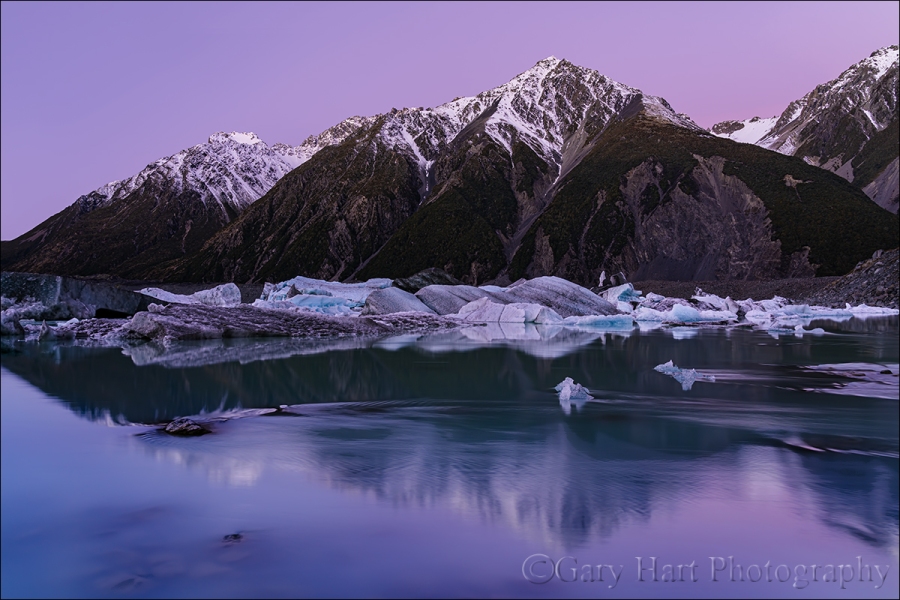 After a beautiful hike to Kea Point (where I opened my bag and realized I’d left my camera in the van—oops, don’t tell anyone), we wrapped our daylight hours with a sunset shoot at Tasman Lake. Normally I scale the 335 steps to the vista overlooking the lake, but it didn’t take much urging to get me to join the group who took the longer but less steep hike to the foot of the lake, where I’d never been.

Getting to the lake from the end of the trail was a short boulder-hopping scramble down a steep hillside, but once I made it down I couldn’t believe I’d never been here. Icebergs, large and small, mingled with the reflection of snowcapped peaks in the clear, turquoise water. We didn’t have clouds to provide an electric sunset, but New Zealand’s impossibly pristine air delivered something I found even more beautiful, the deep magenta of the Belt of Venus. 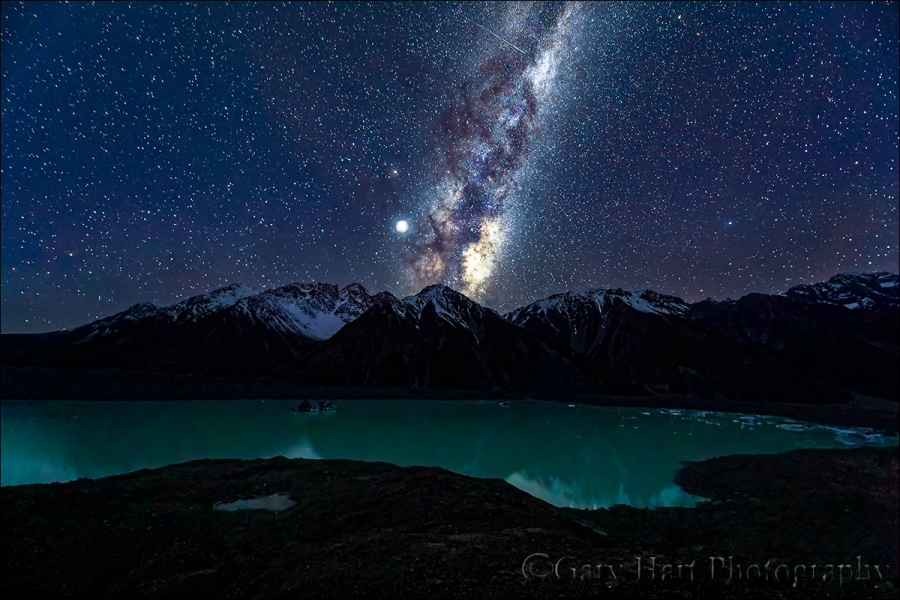 From the very first time my eyes feasted on it, I marveled at what a spectacular spot the vista above Tasman Lake would be for Milky Way photography. I was especially pleased to be guiding an entire group of photographers who were as excited about photographing the Milky Way as I was, so this shoot was the plan since before the workshop started. But as the sky darkened, I was still down at the foot of the lake (just off the screen on the far right) where I’d photographed sunset. Most of the group wanted to stay there for the Milky Way shoot, and while I had to admit that spot would be no less spectacular, I just had to check the higher view off my list. Plus, I knew the Milky Way would align better with the peaks up here. So I scrambled back up the boulders and made the roughly two kilometer walk up here in virtual darkness to make it happen.

I thought a couple others in the group would already be up here, but I arrived to find the view empty. While I was happy to eventually be joined by a couple of others, the solitude I enjoyed for the first 30 minutes I was up here was downright spiritual. Going with my dedicated night camera, the Sony a7SII, I started with my default night lens, the amazing Sony 24mm f/1.4. But the scene was so expansive that I soon switched to my Sony 16-35 f/2.8 GM for a wider view. That did the job for a while, but when I found myself wanting an even bigger view, I reached for my Sony 12-24 f/4 G lens. F/4 is a little slow for night photography, but the a7SII can handle 10,000 ISO without any problem, and at 12mm the star motion of a 30-second exposure isn’t too bad. It didn’t hurt that the best parts of the scene, the snow and water, were highly reflective, and the dark rock wasn’t really essential to the scene. 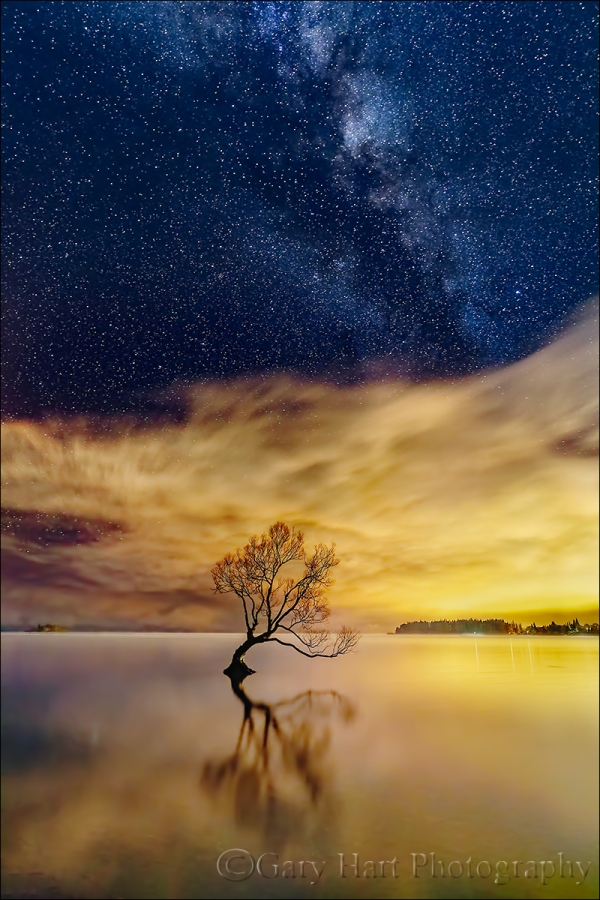 I’d spent the week sharing my favorite New Zealand South Island sights with the Sony AIC crew. With lots of night photography and driving, each day had been long, but this one took the record. I’d started 21 hours earlier and had been a non-stop blur of driving to the beat of music I’d never heard (Bubble Butt?), hiking to and through breathtaking scenery both old and new, and taking pictures, lots and lots of pictures.

Despite all this, no one got tired. It would have been easy to attribute this group’s boundless energy to youth, but the more I watched them work this week, the more I realized their carpe diem passion for experiencing and expressing our world was the driving real force. While I lack some of the non-photography technical skills they employ so effortlessly (specifically video and the computer as an artistic tool), as soon as followed their lead and I allowed myself to stretch my own personal boundaries in other ways, I had no problem keeping up with the pace. (Though I did draw the line at the all-night processing parties.)

As I’d expected when I returned to the lake late that night, the sky was moonless and the Milky Way better aligned with the Wanaka Willow that anchors the scene. But photographing the Milky Way with the tree also put the glow of the Wanaka sky directly in my field of view. As someone who always strives to photograph the natural world untouched by humans, this would have been a deal-breaker for the old me. But what the heck—those lights are kind of pretty, and I’m already out here….

Once I embraced the moment, I was free to click and enjoy. And enjoy I did. For the entire time I was out here, I was completely alone (though a couple of others in the group did come out to shoot shortly after I left). The fog was barely visible in the distance when I arrived, but while I was there I got to watch it ebb and flow like the tide, dropping down to lake level, expanding upward until at times it nearly obscured the sky completely. Benefiting from the extra light my camera could capture (beyond what I saw), what appeared to my eyes as a faint amber hue in the clouds registered on my LCD as a vivid gold even more brilliant than what you see in this image (I toned it down slightly simply for credibility).

And when the bank of fog receded at one point to expose most of the southern hemisphere stars, I pointed my camera away from city lights, toward the darkest sky. Just as my new composition and exposure were ready, a rogue patch of fog wafted up, providing the ideal background for the tree. As if in collaboration with the fog, the lake chose that instant to smooth its ripples and dial up the reflection.

After this night I can’t say that cityscapes are going to become a regular part of my repertoire, but for one night it was liberating discard my shackles and roll with the scene—and I’ll be much less hesitant to do it the next time. But more than the images, it was simply a joy being out there to watch the fog dance with the stars.

My Next New Zealand Photo Workshop 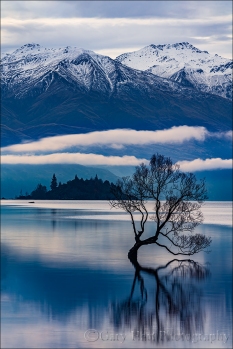 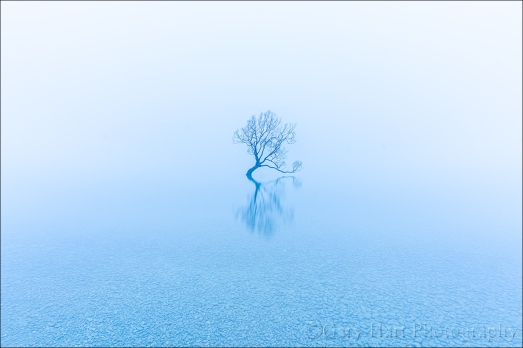 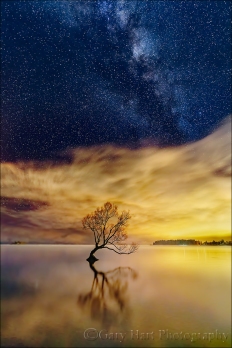 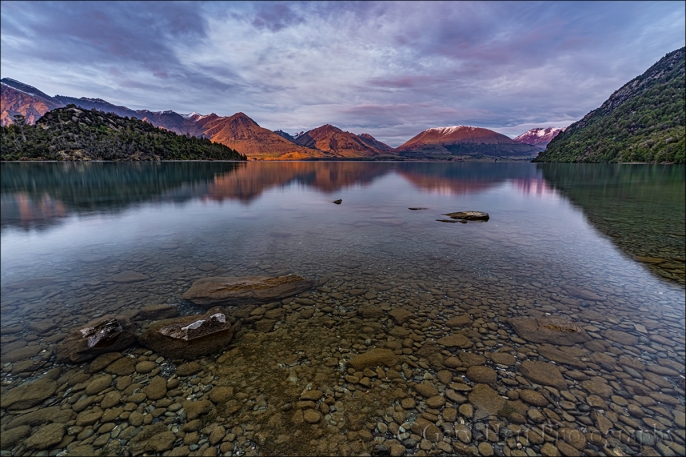 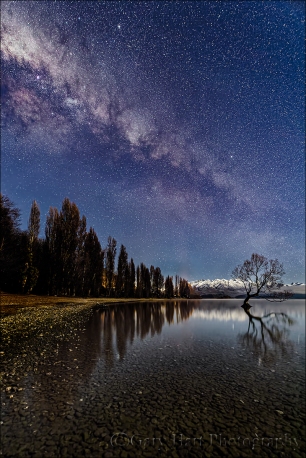 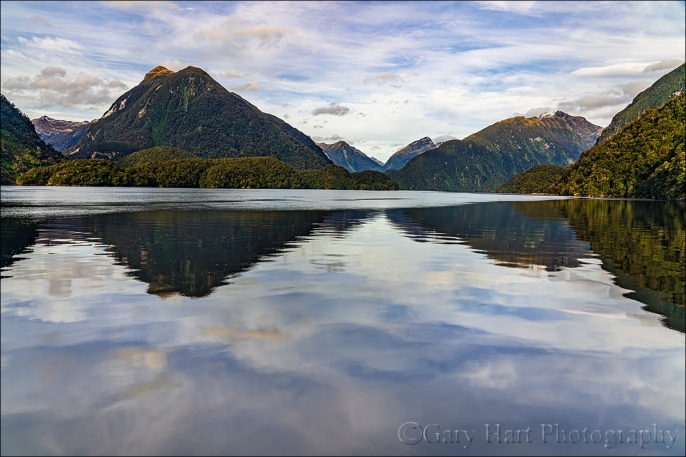 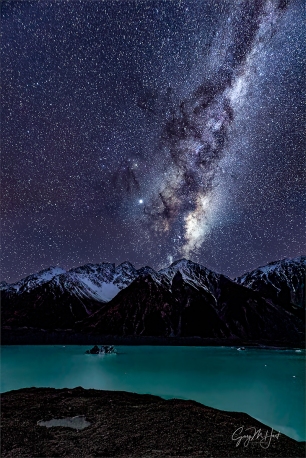 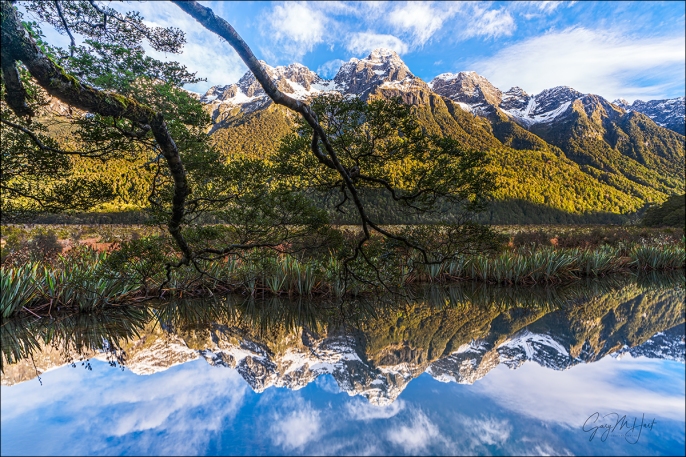 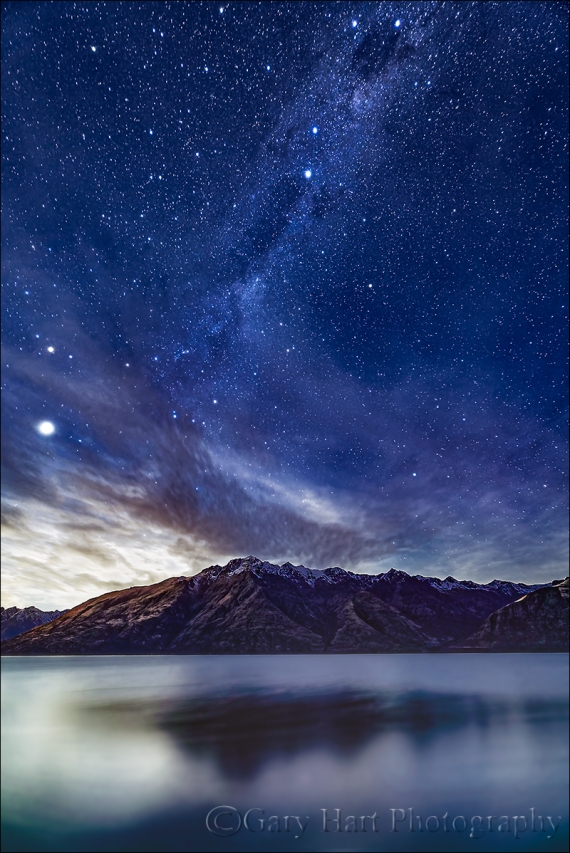 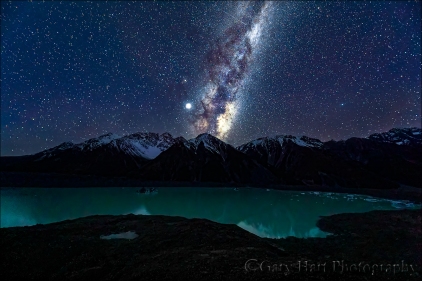 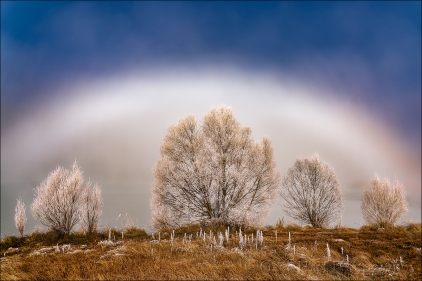 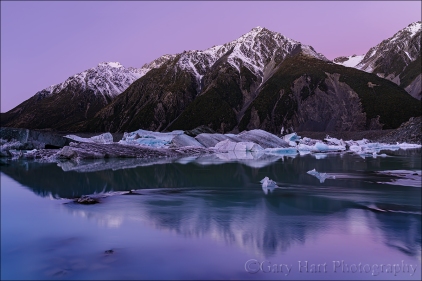 18 Comments on “The Longest Day”