If it weren’t for Tunnel View on the Wawona Road, no doubt one of the most photographed vistas in the world, this view from Big Oak Flat Road, across the Merced River Canyon from Tunnel View, would probably be the Yosemite shot we all see. Visitors arriving from Highway 120 round a bend and are greeted with this view, their first inkling of Yosemite’s grandeur.

I’ve stopped here many times, but rarely photograph this view because it seems I always struggle with what to do with the foreground rocks and tree–composing wide enough to include them makes El Capitan, Half Dome, and Sentinel Dome quite small, and I just don’t think they’re interesting enough to occupy so much of the frame. But  a couple of weeks ago, while guiding a private workshop student on a snowy morning, I found the entire scene etched in white and immediately saw the possibilities. Like magic, when adorned with a snowy veneer these foreground distractions became a worthy subject.

I moved as far back as the terrain would permit so I could increase my focal length and compress the distance separating the foreground and background. Even so, I was only able to go to 50mm, hardly a telephoto shot. Nevertheless, 50mm with subjects in my close foreground and distant background created depth of field problems. Whipping out my trusty iPhone hyperfocal app, I determined that I could make the scene work at 50mm and f16 if I was very careful with my focus point–focusing a little less than twenty feet away would give me sharpness from about eight feet to infinity. Because I had no way to measure the distance exactly (pacing it off would have ruined the pristine snow) and was more concerned about keeping the foreground sharp than I was about minor softness in El Capitan and Half Dome, I biased my estimate on the close side of twenty feet (making sure I focused between fifteen and twenty feet rather than between twenty and twenty-five feet).

All my previous images from this location have been telephoto shots the emphasize the strength of Half Dome, El Capitan, and Sentinel Dome. In fact, last May a rising crescent moon from this location gave me two of my favorite Yosemite images. But this time I was really happy for the opportunity to go wide and use these foreground features that had bothered me in the past, to come up with a fairly unique capture of Yosemite’s most frequently photographed monoliths. 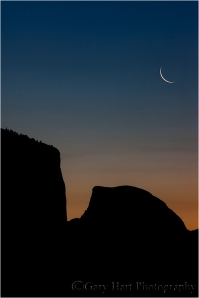 ← Watch your step
Reflecting on reflections →