I love it when things work out

Imagine a line connecting the sun and moon—the half of the moon skewered by that line is always fully lit. Because the moon orbits Earth, our position relative to that line changes daily. Once every 29 days Earth is on that line too, aligned with (and between) the sun and the moon, perfectly positioned to see all of the moon’s sunlit side during our night (in other words, the side of Earth facing the moon is the side facing away from the sun). Because this alignment is the only time the moon’s fully lit face is visible all night, a full moon always rises at sunset and sets at sunrise.

Why do we rarely see the moon rise exactly as the sun sets? There are a couple of reasons: First, local terrain usually gets in the way—if the moon has to rise above mountains, or the sun sets behind mountains, their rise and set times will be skewed. And second, the moon, sun, and Earth are only perfectly aligned for an instant—we see the moon as full on the day it’s most closely aligned with the sun and Earth, but we’ll only see the rising full moon precisely at sunset when sunset for our location coincides with the instant of perfect alignment, and no mountains are in the way. (There are other orbital and positioning factors, but sometimes technical minutia can clutter understanding, so I’ll just leave it here.)

For most Yosemite visitors, viewing a glowing lunar disk above Yosemite Valley doesn’t require much more than being outside and looking up at the right time. But photographers have to be much more precise than that—the camera’s constrained view means anything but a tight composition reduces the moon to small accent (albeit a very beautiful one) to a very large scene. And the camera’s relatively limited ability to simultaneously capture shadows and highlights makes for an extremely narrow time window to photograph a full moon—too early and the moon is lost in still-bright sky (not enough contrast); too late and the dynamic range separating the rising (daylight bright) moon and (rapidly dimming) shadowed foreground terrain is to great for a camera to capture (too much contrast).

So what we want is a moon that rises in very close proximity to Half Dome, at just the right time. When I started planning my 2012 workshops more than a year in advance, I circled October 28 as the date for my favorite Yosemite full moon rise of the year. That was when the moon, 99 percent full, would rise above the steep granite walls of Yosemite Valley, in the general direction of Half Dome as viewed from the valley, at just the right time. I usually choose the famous Tunnel View vista, just east of the Wawona Tunnel, for the autumn moonrise, but my calculations told me that from Tunnel View the moon would rise a little farther to the right of Half Dome than I like, and just a little later than ideal (difficult to expose for anyone without rock-solid understanding of metering and exposure)—still a nice shot, and doable if you’re careful, but I thought there might be something better.

Wanting to be at a higher elevation than, and a little farther north of, my Tunnel View vantage point, I soon realized that the less heralded vista just west of the Wawona Tunnel would be just about right. Not only would this perspective better align the moon with Half Dome, it’s about a mile farther back and over 400 feet higher than Tunnel View (for a slightly earlier moonrise). And being farther back also meant we could use a longer focal length to maximize the distant moon’s size relative to the closer Half Dome. This vantage point doesn’t offer a view of Bridalveil Fall (it wouldn’t be in a telephoto image that includes Half Dome anyway), but that late in the afternoon in autumn Bridalveil is in full shade, and an extremely dry year had reduced it to a mere trickle anyway.

There are lots of apps and software that plot moonrise relative to terrain (Photographer’s Ephemeris being the most popular among photographers), but my moonrise (and set) workflow was in place long before they were available, so I still do it my “old fashioned” way. My technique involves getting the phase, rise/set time, altitude, and azimuth from a website or app (Focalware gives me everything I need), then plotting the moon’s direction with my (now obsolete) National Geographic Topo! software. Topo! gives me the horizontal and vertical distance separating my location and target feature (Half Dome). Plugging that info into my HP11C (scientific calculator) app, I compute the horizon’s altitude in degrees. I plot this altitude and the moon’s azimuth on my Topo! map to   pinpoint when and where the moon will appear (or disappear) from any location I choose. I like my approach because I can do everything I need to without Internet or cell service, but for most people it’s probably just simpler to use Photographer’s Ephemeris or PhotoPills before leaving home.

So anyway, I was able to determine that on October 28, from the vista west of the Wawona Tunnel, the moon would rise behind Half Dome’s Ahwiyah Point at around 5:45, and would be directly above (basically, appearing to sit on top of) Half Dome at around 5:50. With a 6:05 sunset, this was just about as perfect as could be.

I got my group in position at around 5:30 and we just watched and waited. By the end of any workshop everybody has gotten to know each other quite well and idle time is an excuse for fun. This group was no exception. Though I’ve done this enough to be pretty confident the moon would deliver as promised, I couldn’t help feeling secretly anxious that a miscalculation would somehow render my promised workshop grand finale a flop (despite the fact that I’d checked, double-checked, triple-checked, and then checked some more). But a little after 5:40, just as the joviality peaked, a white arc started to glow behind Ahwiyah Point (below) and we were instantly down to business. With foreground for perspective you can really get a sense for how quickly the moon rises—fortunately, everyone was ready with their exposure and composition, so the clicking was pretty much instantaneous and I don’t think anyone missed anything.

As we shot, I encouraged the group to vary their compositions—while it was mostly a telephoto scene, there were wider and tighter versions, as well as horizontal and vertical orientations. I also frequently reminded everyone to monitor the moon’s highlights—as the moon rises, the foreground darkens but the moon remains daylight bright, making exposure increasingly difficult.

My favorite time of evening is the ten or fifteen minutes after sunset, when the shadows have left the landscape and the east horizon is layered with pink and blue pastels. As Earth’s shadow rises from the eastern horizon, the sky’s glow deepens to a rich magenta that and paints entire landscape. The image at the top of the post was one of the last of the evening, several minutes after sunset. If you look closely, you can see the sky’s pink glow bathing Half Dome’s reflective granite (my camera actually picked more of this color than you see here, but I desaturated it slightly in Photoshop).

(I’d love to say that this was the highlight of my day, but as beautiful as the moonrise was, it was trumped by listening to my Giants World Series victory on the drive home.)

This is the moon when it first appeared, about 20 minutes before sunset. As you can see, the contrast is pretty good, but the light isn’t nearly as nice as it was shortly after sunset. 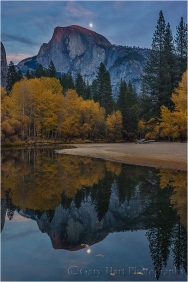 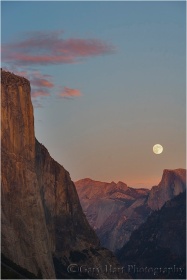 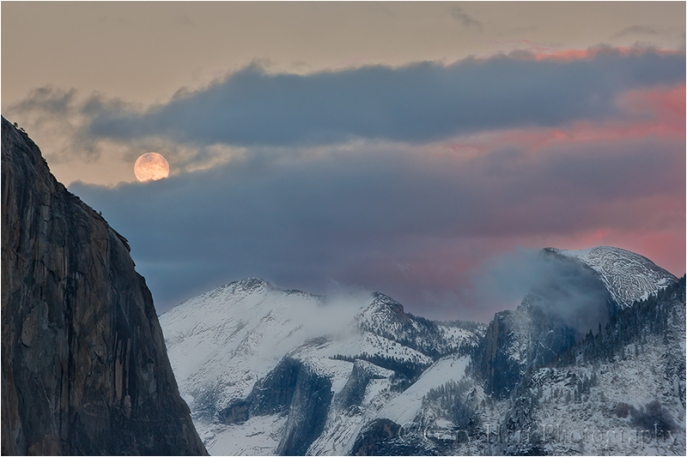 ← Land before time
Missing the tree for the forest →

10 Comments on “I love it when things work out”