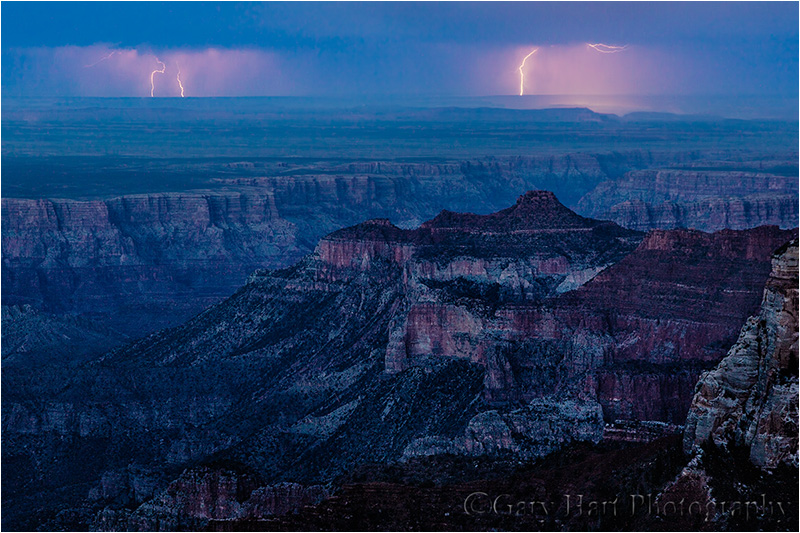 After a marathon drive (that included four states and one unscheduled visit with a Utah Highway Patrol officer) from Northern California to St. George, Utah, Don Smith and I arrived at the North Rim of the Grand Canyon on Saturday afternoon. Our goal was advance scouting for our back-to-back Grand Canyon Monsoon workshops, which start this afternoon (Monday). Though we’re both pretty familiar with the North Rim, we wanted to check the conditions there (the wildflowers are gorgeous right now), and since these would be our first workshops at the North Rim, we also wanted to get a better handle on the drive times to our various locations.

Another motive was to scrape the rust on our lightning triggers, which hadn’t been used since last summer. Unfortunately, the Grand Canyon weather reports were less than promising, so when we headed out to shoot sunset Saturday night, lightning wasn’t on our mind. But shortly after arriving at our sunset destination, Walhalla Point, we saw a bolt strike across the canyon, above the Painted Desert. So out came the lightning triggers, and we spent the entire shoot bouncing between the (occasional) lightning in the east and truly gorgeous sunset color and sidelight along the rim to the south.

Don and I had much better luck with the sunset than we did with the lightning triggers (it turns out the rust was more on the photographers than the triggers). Our lightning attempts targeted one area in particular, but as the light faded, so did the lightning our target zone, and we became resigned to chalking this first night up to experience. But about the time we were ready to wrap up (ever notice how many stories of successful images start with those words?), we started seeing more lightning strikes farther north. Though it was getting cold up there at 9,000 feet, we thought we’d give it one more shot and move a few miles north to Roosevelt Point.

Twilight was in full bloom by the time we arrived at Roosevelt Point; fortunately, so was the lightning. I started with my lightning trigger, but soon switched it off in favor of long exposures. It seemed that one out of every two or three 30-second exposures seemed to capture a bolt, but with the light fading quickly, I needed to adjust my exposure after each frame. Soon I found myself in bulb mode, with exposures measured in minutes. The image here is my penultimate frame, a nearly nine-minute exposure captured forty-five minutes after sunset. The long exposure was able to wring out just enough light to reveal detail in the canyon. (The final frame, though exposed 2 1/3 stops brighter, was even darker than this one.)

This image perfectly illustrates the difference between the camera’s reality and ours. The scene my eyes saw was dark: not only was the Grand Canyon’s rich red completely lost to my eyes, its ridges and chasms were reduced to barely perceptible dark shapes. And the bolts you see here were not simultaneous—the one on the right fired early in the exposure, the two on the left came together toward the end. But through my camera’s unique vision, I was able to reveal the Grand Canyon in a way we human’s can only imagine.