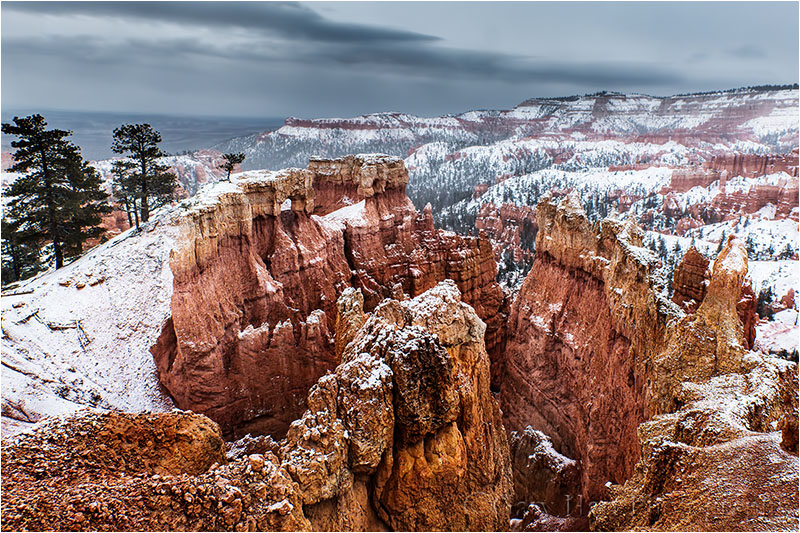 We warm blooded humans have lots of ways to express the discomfort induced by low temperatures, ranging from brisk to chilly to freezing to frigid. But because I’ve always felt that we need something beyond frigid, something that adequately conveys the potential suffering, let me submit: stupid cold. At the risk of stating the obvious, “stupid cold” is when it’s so cold, the only people without a good reason to be outside (for example, the house is on fire) are, well….

Before I get into a recent personal encounter with stupid cold, let me offer a little background. Being California born and raised, I often find myself with a slightly higher cold threshold than many of my workshop participants. I’m not proud to say that pretty much when the temperature drops below 50, I’m breaking out the gloves and down jacket. Without shame. I get a lot of grief for this, but that’s fine because I’m comfortable. In fact, no matter how cold it gets in California, I’ve always been able to bundle up enough to stay comfortable. Viva la Mediterranean climate.

So imagine my chagrin when, while preparing for my recent trip to Bryce Canyon to co-lead Don Smith’s Bryce/Zion workshop, I saw overnight lows in the single digits (!) forecast. I know many people live places that get this cold, but how many of them actually go out specifically at the time when it’s coldest (sunrise)—and then just stand there? Unfortunately, when you’re a photographer, especially a photographer who is counted on by paying customers, staying in bed at sunrise is not an option.

So anyway, single digit lows. Surely, I rationalized, anyone who can endure night games at Candlestick Park in July, can, given enough layers, handle whatever Bryce can dish out. So, employing my tried and true Candlestick Park infinite layer approach, I sucked it up, cleared my closet of all cold weather gear, crammed it into my largest suitcase, then crossed my fingers when the Southwest ticket agent hefted the bulging cube onto the scale (49.8 pounds, thankyouverymuch). Off to Bryce.

So whatever happened to those days when the weather forecast was a crap-shoot, when you never really worried about the forecast too much because it was rarely right? We arrived at Bryce to find temperatures as cold as advertised. Windy too. And as if to rub salt in the wound, the coldest shoot we had was the workshop’s first sunrise, before anyone had a chance to acclimate: 10 degrees fahrenheit and 25 MPH winds (I know, I know, that’s nothing compared to your January Yellowstone bison shoot, or that time in Saskatchewan when you stayed up all night to photograph the northern lights, but you can’t say anything unless you sat through the last pitch of a night game at Candlestick Park).

I must say, my Candlestick more-is-better strategy almost worked. Two pairs of wool socks inside sub-zero rated boots kept my toes nice and toasty for the duration. Silk long-johns, flannel-lined jeans, insulated over-pants—my legs were happy too. And my torso did quite well inside a long sleeve wool undershirt, Pendleton (wool) shirt, Patagonia down shirt, and a down jacket. My ears were cold but tolerable beneath a wind-stop ear band and cozy wool cap. And my nose, cheeks, and mouth were a bit more exposed, but a wool gator took enough of the edge off to make it manageable.

But, despite all the preparation, what thirty years of Candlestick experience hadn’t prepared me for was cold hands. Oh. My. God. I thought I was ready with my thin poly running gloves as liners for thick wool gloves—not even close. The problem was, unless you’re keeping score, watching a baseball game doesn’t require hands unless there’s something to cheer for (a rare event for most of my Candlestick years)—at the ‘Stick I could sit on my (gloved) hands, bury them in pockets or beneath my wool blanket (never left home without one), or all of the above. But a camera, it turns out, requires hands. Fingers too. I quicky found that I could compose and click maybe three frames before the cold drove me to the nearby visitor’s shelter to pound life back into my fingers. Not a productive morning.

After this first sunrise, things improved. Temperatures warmed a bit, the wind abated, my body adjusted (slightly), and I was able to mitigate my hand problem with the purchase of silk liner gloves and thicker wool gloves. I also came away with a new found appreciation of my Hawaii workshops—sunrises in a tank-top, shorts, and flip-flops. Nothing stupid about that.

Compared to the cold we’d experienced at sunrise, at 20 degrees, the afternoon I took this picture was downright balmy. When we arrived at Sunrise Point, the snow that had been falling most of the afternoon was still falling, obscuring the view to the point where many in the group retreated to the car. But those of us who stayed out were treated to a twenty minute window between the lifting of the clouds and the fall of darkness. Not the spectacular color and warm light that generates so much excitement, but wonderful, even light that really allowed the pristine snow to stand out against the red sandstone.

← Securing the border
The cure for blue skies →