“When you want something badly enough, a few mishaps are no deterrent.” Wile E. Coyote

Scouting locations for my Maui workshop, I scrambled cross-country down the rugged flank of West Maui’s north side, trying to make my way to a series of lava-rock, reflective tide pools. Once I’d descended to ocean level, reaching the pools still required hopscotching across wet basalt that was a disconcerting hybrid of banana peel slippery and razor sharp. As beautiful as the scene was, I decided access was far too dangerous for a group.

Rather than return the way I came, I continued picking my way along the rugged shoreline, eventually finding another group of connected pools elevated above the surf on a lava shelf. Even more varied and beautiful than the original location, I initially thought this spot wouldn’t be suitable for a group either. But climbing back to my car I stumbled upon an overgrown, unpaved “road” (maybe once upon a time used by vehicles) through the jungle and in the general direction of the main road (up).

After hiking a couple of hundred yards, I parted a branch blocking my progress and found myself back at the highway (“highway” in this case is the one to one-and-a-half lane, mostly-paved Highway 340 circling West Maui), not too far from my car. So, maybe these tide pools could be accessed by a group. Fearing I’d miss this obscure spur from the highway, I saved its position on my GPS and made a mental note to return.

The day before my next Maui workshop started, I picked up my friend and fellow photographer Don Smith at the airport. I was particularly excited to share the West Maui tide pools I’d “discovered” (it’s not as if I’m the Edmund Hillary of landscape photography—there are signs down there that indicate the spot is known to locals) and off we went.

Highway 340 circling West Maui will void most rental contracts, even on the best of days. This day the steady rain that had been falling all afternoon seemed to increase with the road’s remoteness, and I found myself wishing for another speed on the windshield wipers as we slalomed around boulders dislodged from the surrounding cliffs by the downpour—at one point we passed a car waylaid by a grapefruit-size rock embedded in its windshield.

Undeterred, we soldiered on. This was Don’s first Maui visit, so I narrated the tour with vigor, enthusiastically pointing out the island’s scenic highlights as we sloshed past, occasionally pausing my narrative long enough to reassure him that the highway was indeed navigable despite increasing evidence to the contrary, promising a worthy payoff at the promised destination.

Closely monitoring my GPS (almost as if I had a brain), at the point of the hidden intersection I veered left into a gap in the trees with surgical precision. Between rapidly oscillating wipers the narrow track at first unfolded just as I’d remembered it, before suddenly narrowing, dropping, and twisting to the right. Dense foliage scraped both sides of the car, which by now was clearly losing purchase in the mud—before Don could finish a sentence that started, “Are you sure…,” it dawned on me that I’d never intended to actually drive this road, that my plan when I marked it six months earlier had been to park at the top and walk down. Oops.

Propelled by momentum, and without the benefit of traction, gravity was now in charge (remember the jungle slide scene from “Romancing the Stone“?). Steering seemed to have less influence on our direction of travel than it did on the direction we faced, so I quickly gave that up. If it weren’t for the road’s deep ruts, I’m sure we’d have careened into the jungle. I held my breath as we approached a bowling ball size boulder and exhaled when the undercarriage passed above unscathed. After the longest hundred yards of my life, the slope moderated somewhat and the car slid to a stop.

After a few seconds of cathartic expletives, Don and I scanned our surroundings. With the car pointing in the the wrong direction (down), I knew getting out started with somehow turning around. A little farther down the slope I spotted a flat, clear space with a short Y-spur that, if we could reach it, might enable us to backup and turn around. I scrutinized the dash for the switch that would engage the 4-wheel drive (I swear the guy at rental agency promised my SUV had 4WD). When we didn’t find it, Don dug the manual from the glovebox—apparently 4WD is an option the powers-that-be at Alamo deem unnecessary on Maui SUVs.

With crossed fingers I gave the car some gas and felt the tires spin with no effect. More expletives. Don and I exited into the rain to evaluate our predicament—we were stuck on a road that was soon to become a creek, supported by four mud disks where the tires used to be. Hmmm—that would explain the whole no traction thing. Scraping the tires clean would have been of little value because the next revolution would simply reapply a new layer.

With Don pushing, I found that cranking the wheels 90 degrees gained just enough traction to free us and I gingerly rolled the car further downhill and into the open space and down into the Y’s left spur. Yay! With only a little bit of slip/slide drama, I backed slowly and pivoted into the Y’s other spur until the car was turned around and pointed back up the slope we’d just descended.

Now for the hard part. Looking for the first time in the direction of freedom, we came to grips with the chute that had deposited us: Not only was it steep, at the steepest point it curved hard-left but banked steep-right—not exactly a design that would be embraced at Daytona.

I inhaled and goosed the gas and we shot upward, fishtailing like a hooked marlin before losing momentum and coming to a stop no more than fifty feet up the road. This time the car was skewed 45-degrees, its left-front fender in the shrubs on one side, its right-rear fender in the shrubs on the other. When I gave the car gas, the tires spun hopelessly.

More stuck than ever, we started strategizing Plan B—with an hour of daylight remaining and no cell service, we’d need to walk up to the highway and hope to flag down, in the rain, a good samaritan willing to drive two disheveled, mud-caked strangers back to civilization (about 45 minutes away), then hope to summon a tow truck that would extricate us.

While Don trudged up the road to implement that plan, I stayed with the waylaid car, licking my wounds and feeling pretty foolish. Surveying things more closely, it occurred to me that since the road was quite narrow, and the distance and tight curve would make winching difficult, even a tow truck wouldn’t guarantee freedom. If I’d only remembered my Acme Rocket Skates….

With nothing else to do, I decided to take rescue into my hands one last time. Rather than apply the brute force, gas pedal to the floor approach, I put the car in reverse, gave it just a little gas, and cranked the steering wheel back and forth violently until the tires broke free and returned more or less back in the ruts. I applied a little more gas to get it rolling, then let gravity and the rutted road roll me back to the level clearing. Without allowing it to lose momentum, I added a little more gas and rolled all the way to the far back end of the clearing, where I found a small section that was less mud and more gravel.

I’d given myself about 30 feet of relative flat for momentum before reaching the hill. With a small prayer I slipped the transmission into in first and eased the accelerator down, adding gas just slowly enough to avoid losing traction. By the time I reached the hill the pedal was all the way to the floor and I had enough forward speed to avoid much of the fishtailing I’d experienced earlier. Past the crumpled shrubs and protruding rock I shot—as the road steepened my speed dropped and I could feel the wheels spinning but I just kept my foot to the floor. Approaching the curve I felt the car start to tilt right and slow almost to zero but somehow the tires maintained just enough grip to avoid a complete stop. I rounded the curve and surprised Don, who sprinted ahead and turned to cheer me forward.

By now the fishtailing exceeded the forward motion but I didn’t care as long as there was still forward motion. About 20 yards beyond the curve the road leveled and I felt the tires grip rock—freedom! Not wanting to stop until my tires kissed actual pavement, I lowered my window and high-fived Don as I rocketed past and onto the highway. At the top we just couldn’t stop laughing, both at the foolish predicament I’d created, and our utter disbelief that we’d made it out.

Despite the traumatic memories, I’ve added this location to my Maui workshop rotation (but now we walk down, thank-you-very-much). Nevertheless, for various reasons this location has managed to thwart me—I’d never captured an image that completely satisfied me. The first year our shoot here was washed out by a deluge that made the road impassible even on foot. Last year we were inhibited by persistent showers that were compounded by camera problems.

But this year I gave it another shot, leading the group here at the end of a long day that started with a 3:30 a.m. departure for Haleakala. Dark gray clouds hung low and delivered tangible flecks of moisture, and I feared they’d let loose before the group had a chance to get established. The road was muddy and a little slippery, not like it was for my misadventure, but enough that a few people bailed and called it a day.

The handful who stayed were rewarded with mirror-calm tide pools surrounded by exploding surf. The clouds didn’t permit enough sunlight to color sky, but they retained enough definition and texture to be photogenic. As I moved around to work with each of the workshop participants, I fired a few frames of my own, eventually landing in the spot you see here.

I decided to go with my 16-35 lens to exaggerate the pool at my feet. Following my general policy to place the horizon line separating foreground and sky on the part of the scene with the most visual interest, I gave almost all my frame to the foreground. I rotated my polarizer to a midway point that reflected the sky but still revealed the submerged basalt. Satisfied with my composition, I stood back and watched the surf, timing each click with the most violent collisions.

I captured several more “keeper” images—enough, I think, to more than make up for previous failures (and mishaps) here. Sleep was no problem that night. 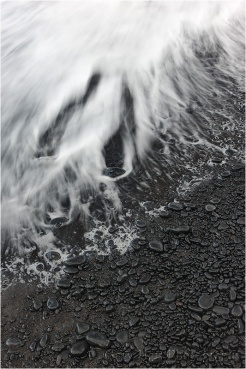 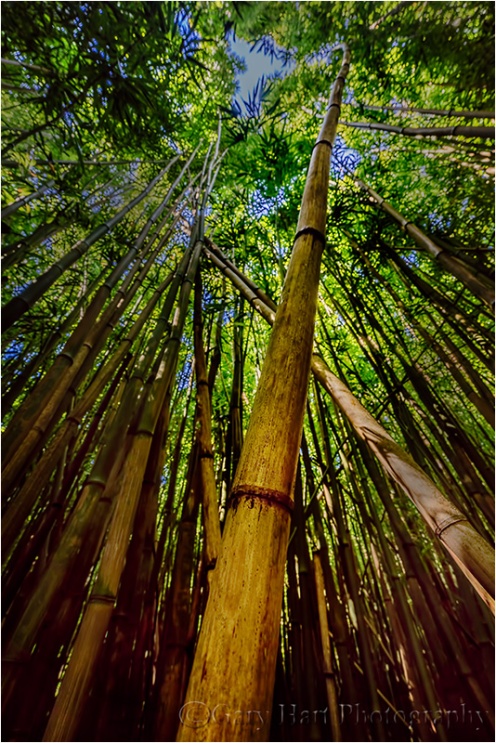 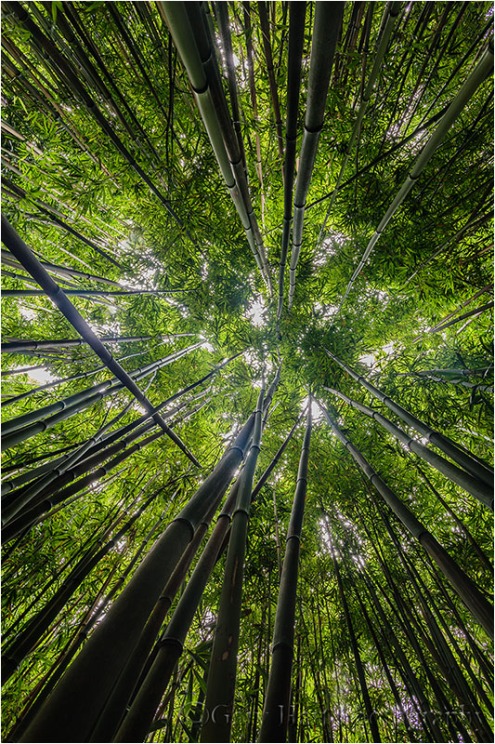 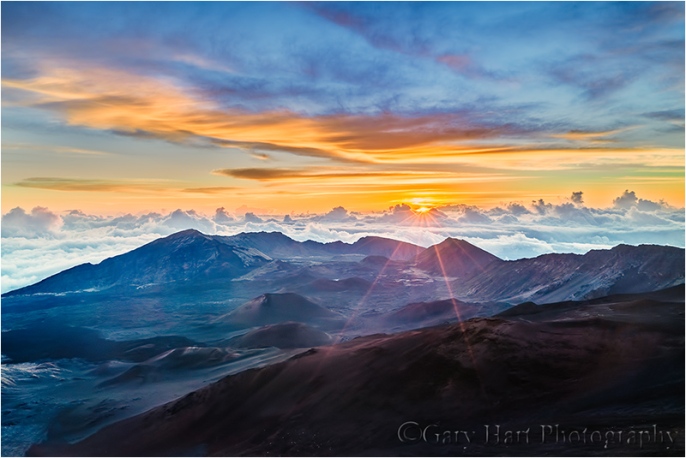 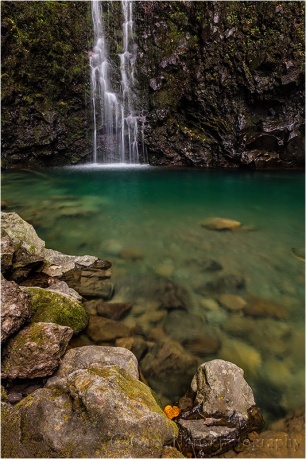 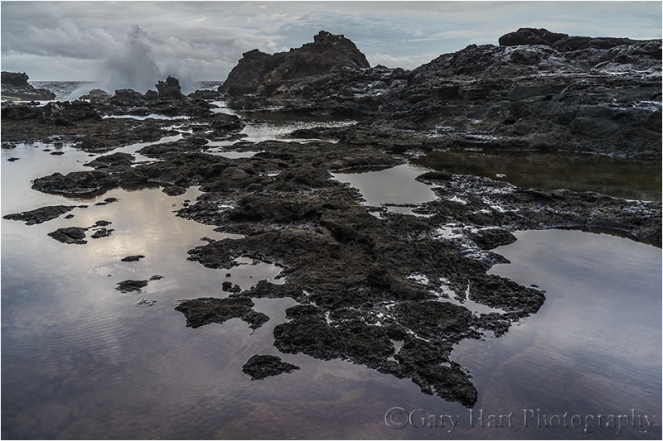 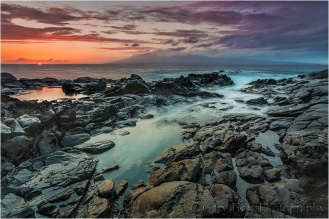 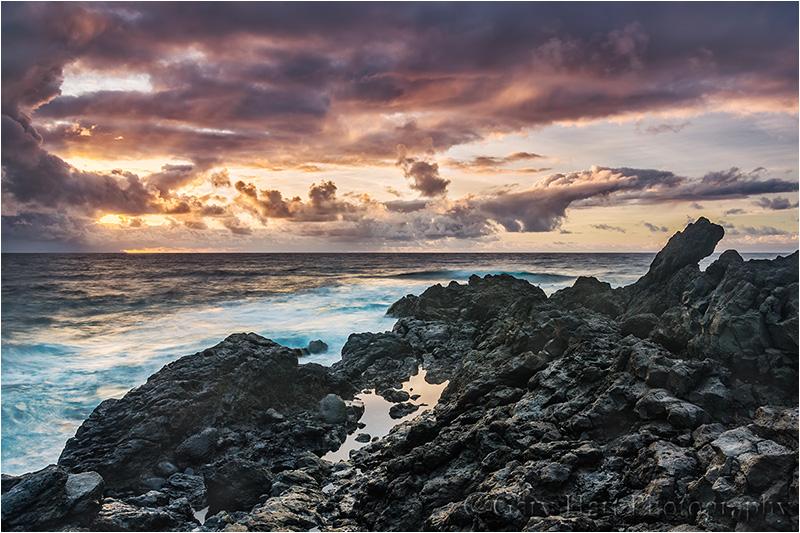 ← Aloha from the top of the world
Going with the flow →