The grass is greener

Their implicit message is, “If only I lived closer to such-and-such, my photography would be so much better.” But you know what? We all have our grass-is-greener longings. When someone tells me how lucky I am to live where I live (I am), I can usually counter with, “Yeah, but I’d love to have the skies that you get.” Because the sad truth is, for someone who loves dramatic weather and interesting skies as much as I do, California is definitely not the place to be.

My advice to anyone who lives in Nebraska, or Texas, or Illinois, or pretty much anywhere else that lacks California’s dramatic scenery, is to emphasize your skies (which are almost certainly more interesting than mine). Keep a mental database of interesting foregrounds (they don’t even need to be particularly photo-worthy by themselves)—a single tree, reflective lake, cascading stream, whatever—that you can get to fairly quickly when the sky shows potential.

When photographing your subject beneath an interesting sky, place it at the bottom of your frame, compose wide, and give 2/3 or more of the frame to the sky (the better the sky, the more real estate it deserves). Vertical compositions often work great when you want to emphasize the sky. Is it Yosemite or the Grand Canyon? No, but I could be a very happy photographer shooting nothing but great skies for the rest of my life.

So. As you might guess, on the rare occasion when it looks like something special might happen overhead, I’m all over it. Unfortunately, and despite my proximity to so many world-class locations, there’s not a lot I like to photograph within a few minutes of my home.

I got a frustrating reminder of that a few years ago when, during a heavy (for California), persistent rain, I looked out the west-facing window of my home on Sacramento’s west side and saw nothing but clear sky on the horizon. Hmmm. Knowing three things: 1) the sun sets in the west 2) weather in Northern California moves from west to east 3) a rainbow needs low sunlight and airborne water, inferring an imminent rainbow wasn’t rocket science. All I needed was an east-facing scene.

And therein lay the rub: It’s at least a 30 minute drive to any scene that would do the rainbow justice. Of course with more than an hour until sunset, I figured there was time if I hurried, so I tossed my gear in the car and headed east, toward a small tree that stands by itself atop a hill east of town. And sure enough, within ten minutes of my departure, the rainbow did indeed manifest as expected. What also manifested was rush hour traffic.

For the next hour, I (along with what seemed like ten million commuters) were treated to a vivid double rainbow framing all six lanes of US 50. Poking along at less than 10 miles per hour, we were also beneficiaries of ample opportunity to appreciate the spectral splendor. On the positive side, this rainbow was so beautiful that I couldn’t even muster much impatience—I just sat there in traffic and marveled. And as if its beauty weren’t enough, this rainbow persisted longer than any rainbow I’ve ever seen, lasting at least an hour—all the way up until I pulled my car to a stop in front of the tree. True story.

Fast-forward four years. A couple of months ago I looked out the very same window during on a rainy afternoon and saw the same clear horizon I’d seen four years earlier. Within minutes I was in my car and heading toward the same tree. This time the traffic cooperated and I made good time, arriving at “my” tree about 30 minutes before sunset.

Sadly, despite all the signs pointing in the right direction, the rainbow never happened. Waiting for the sun to appear, I photographed saturated clouds in a steady rain, at no point not believing its appearance was imminent. Just about the time the sun appeared, the rain stopped. And then, about the time the rain returned, the sun set. Oh well.

Am I complaining? Of course not. I didn’t get my rainbow, but I did get a rare opportunity to photograph Midwest skies right here in Northern California. And I hope this image illustrates my point—wasting energy longing for what’s over there obscures the beauty at your feet. Good photography doesn’t need a towering monolith or double rainbow, it just needs a creative eye and a little persistence.

A Gallery of Skies 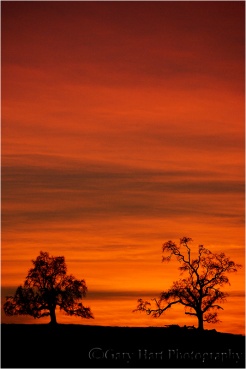 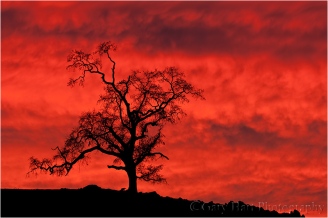 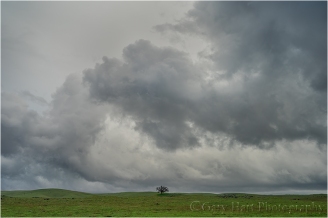 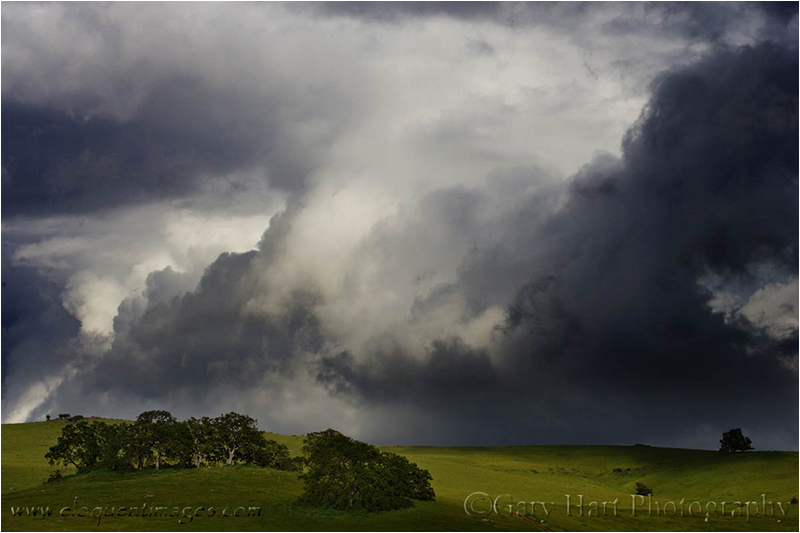 ← Chased by rainbows
As far as the eye can see →

5 Comments on “The grass is greener”