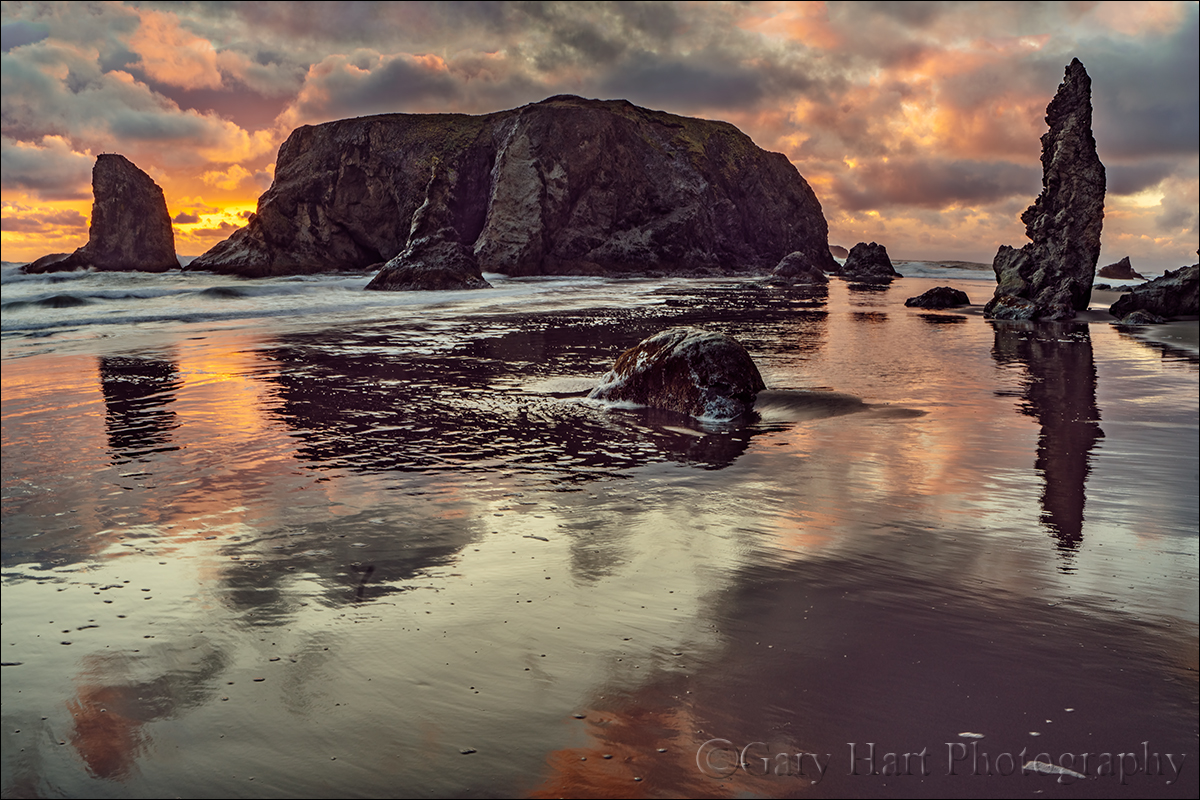 In January Don Smith and I flew to Oregon to get eyes on the damage caused by the Eagle Creek fire in advance of our (now just completed) annual Columbia River Gorge photo workshops. Not knowing what we’d find there, we allowed lots of time to scout new locations to replace the ones we lost. Fortunately the fire damage, while tragic and extensive, was limited to a very small part of our workshop area and we were easily able to find suitable substitutes for the two waterfalls we lost.

With a few extra days on our hands, Don and I beelined to the Oregon Coast to see for ourselves what we’d been seeing in beautiful images for years. And in the back of both of our minds was the opportunity to check out the area’s potential for a photo workshop. The scenery didn’t disappoint, and workshop plans began to take shape.

After a great, albeit wet (waves to my waist), sunset shoot at Cannon Beach, we headed down the coast the following morning, photographing in a light, intermittent rain along the way. As the day progressed, so did the rain. By the time we made it to Face Rock Beach, an hour or so before sunset, visibility was just a couple hundred yards in sideways rain. Rain and wind is not usually enough to deter us (wind is worse), but everyone we ran into in Bandon urged us to head inland before the incoming storm hit, or risk being stuck there. Not knowing the area and with a flight to catch the next day, we heeded the advice and evacuated to Eugene without a single Bandon image. But by then we had a workshop framework in mind and knew that we’d be back to Bandon for multiple scouting trips.

We returned to the Oregon Coast a few weeks ago, about a week before this year’s Columbia River Gorge workshops. In addition to general feet-on-the ground quality time on and near the coast, we were especially anxious for a second shot at the spectacular sea stacks of Bandon. This time we took a couple of days to make the trip from Cannon Beach to Bandon, encountering occasional rain that diffused the light and made for wonderful photography along the way. (It’s easy to see why the Oregon Coast is so lush.) But pulling into Bandon, the sideways rain was (still?) falling—does the sun ever shine here?

Despite the conditions, Don and I were so determined to photograph Bandon that nothing short of a tsunami would have kept us off the beach. Donning our rain gear, we trekked out to a strip of sand separating the violent surf from the rocky cliffs and set up, thankful for low tide. The rain and wind made photography difficult, but it gave me time to familiarize myself with this spectacular beach. At one point it started hailing, but brightness near the western horizon gave me hope that conditions would improve before the sun set. The rain stopped about 30 minutes before sunset. Benefiting from my newly gained insights, I was prepared to take full advantage of the remaining light and went right to work.

The photography was spectacular, but I hadn’t fully accounted for ramifications of the incoming tide—shots that had looked so promising earlier were now a bit more dicey. I found that I could make tenuous positions work most of the time, but every dozen or so waves included at least one that sent me scurrying for higher ground. So far none had made it all the way up to the cliffs, but as a native Californian, I’ve been around the beach enough to know that you should always anticipate a wave that’s at least twice the size of the biggest wave you’ve seen so far. So while I knew even the biggest waves to that point would have at worst soaked me, I knew the potential existed for a life-threatening “sneaker” wave.

Photographing Cannon Beach in January, I’d been quickly soaked to my ankles by an unexpected wave, and figured what the heck and just stayed out until the surf regularly washed up to my waist. But the surf there was more gentle, and behind me was gently sloping sand—and I only felt cold there, never in danger. But pinned by cliffs at Bandon, prudent decision making would have driven me to more open sand with an easy exit to high ground. But that’s not where the pictures were. So I continued photographing with a wary eye on the surf.

It soon became clear that the frequency of my wave dodging was increasing with time. At one point I left my tripod and camera to rescue my camera bag, once believed to be safely stashed atop a rock. I return to find my tripod on its side and my camera face down in the sand. There was no water damage, and the landing was soft enough to avoid impact damage, but a veneer of sand rendered it unusable until I could clean it off.

With my 16-35 and a renewed vow to be more careful, I went back to work. Every two or three waves forced me to race to higher ground (I’d ruined a pair of shoes at Cannon Beach in January, and didn’t want to double my loss with their replacements), but as the sky started to color, I soon realized that these big waves also left a reflective sheen in their wake. I captured this image just as the sunset color peaked. Just a few minutes later the advancing ocean took over the beach and drove Don and me to higher ground. 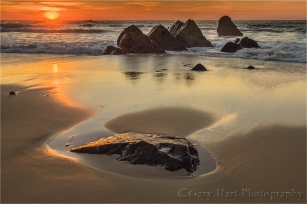 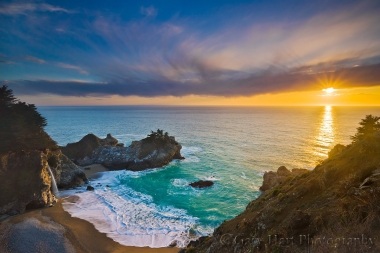 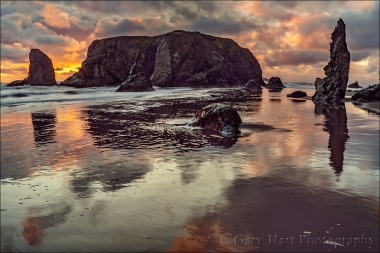 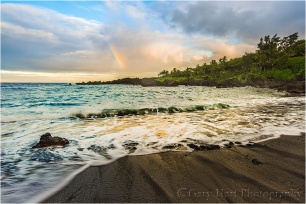 10 Comments on “Reckless at Bandon”