Last week I got to preview the brand new, and top secret (at the time) Sony 14mm f/1.8 GM lens. I really didn’t have time for this, but this was the lens I’ve been praying for pretty much my entire photography life and I just couldn’t say no. This isn’t so much a review as it is a summary of my experience using it, and my first impressions.

It was a Monday morning (April 12) and Don Smith, his wife Beri, and I were on the road to Bandon, Oregon when the call from Sony came in.  It went something like this:

Don and Gary: Duh—uh, sure!

Don and Gary: We have a workshop starting tomorrow, but we’ll figure it out.

Sony: Oh, this lens is a secret, so nobody can see you using it.

Sony: And one more thing. There’s only one lens, so you guys will need to share.

Don and Gary: (Eyeing each other suspiciously) Uh, sure…

The lens was overnighted arrived the next day, just as the workshop started. By then Don and I had agreed to a sharing plan that would give each of us equal opportunity to use the lens without affecting the workshop, and had even come up with an answer in the (we hoped) unlikely event that anyone asked what lens we were using. (I only had to lie once.)

I checked the moon schedule and determined that the only two nights that week suitable for night photography were our first two with the lens, which were our only two remaining nights in Bandon. Fortunately, with late sunsets and early sunrises, we had no group night shoots planned), so the only cost was sleep.

Don got it the first night, but I went out with him to scout for potential compositions and get up to speed on my as yet unused (thank-you-very-much, COVID) Sony a7SIII. The next night was my night—I went out solo and I had the entire beach to myself.

The first thing to strike me about this lens was its compactness, which just blew me away. How can a lens so wide, and so fast, be so small and light? But it also felt quite solid in my hand, which I took as a good sign. It has an aperture control ring on the lens (with a toggle to choose between click or “unclick”), but I especially appreciated the aperture ring’s “A” position, which allows me to set my aperture with the camera’s aperture control dial as I do with all my other lenses. (Since I will use this lens a lot at night and need to do everything by memory and feel, the more I can control my settings without doing something different, the better.)

I have loved, loved, loved night photography with the first two Sony a7Sx series bodies, but, despite having the a7SIII since last summer, this was the first time I’ve been able to use it. All I can say is that it only took a couple of minutes to know that the a7SIII and 14mm GM are a match made in heaven. Not only does the a7SIII give me clean files at 12800 ISO, when paired with a fast lens like the 14mm GM, even with nothing but starlight, I can compose and focus (without guessing) in seconds. But the thing that excited me most this night was the amount of sky I could capture at 14mm—until now my night lenses have always been the (wonderful) Sony 24mm f/1.4 GM and Sony 20mm f/1.8 G, but

Turns out I’d underestimated the breadth of the 14mm lens’s field of view and my ability to deal with the thin, 6% crescent moon hovering near the western horizon. The amount of light necessary to bring out the stars and beach detail also rendered the much brighter moon a large white blob, meaning that many of the compositions I’d planned were simply not doable without being photobombed by the moon. So I spent most of my time on the south end of the beach, concentrating my compositions on Wizard’s Hat. Bandon’s other iconic sea stacks would need to wait for a future visit.

The tide was out, which allowed me to get pretty close to Wizard’s Hat and its neighbors. That was a good thing, because with a 14mm lens, close is essential, the closer the better. It was also a bad thing, because at the beach, the closer the wetter. Fortunately, the long, nearly flat beach meant no rogue waves crashing atop me without warn, it just meant that when a big wave did crash a couple of hundred feet out, it washed up and over my quickly saturated boots and socks. It wasn’t long before I just resigned myself to wet feet if I wanted to include Wizard’s Hat and the spectacular reflection in the sheen left by receding waves.

After my first few frames I magnified the image in my viewfinder and scrutinized the stars and sea stacks. I checked the sea stacks for focus softness and found none—wow, is focus easy with the a7SIII and a fast lens! I also checked for noise all the way up to ISO 12800 and saw nothing that I knew wouldn’t be cleaned up easily by Topaz DeNoise AI. In the stars I looked for distortion, especially in the corners. I did the entire shoot at f/1.8 to really put it to the test and was blown away by the complete lack of distortion throughout the frame. With each close look confirming what I’d seen in the previous checks, I soon stopped checking and just concentrated on taking pictures.

I love the night sky, and am thrilled that recent technology has allowed me to photograph it so easily. But I always found myself longing for a wider field of view to get as many stars as possible, especially in New Zealand where the Milky Way is so high in the June sky, or at the bottom of the Grand Canyon, where I find myself always wanting to include more sky and foreground. I know the Sony 12-24 f/2.8 lens will give me the breadth I long for, but f/2.8, while fast enough in a pinch, isn’t as fast as I’d like (especially in the near total darkness at the bottom of the Grand Canyon). And a fast lens that requires me to stop down a stop or two to maximize image quality doesn’t really provide much of an advantage. Until now I’ve had to work around these compromises. There are other lenses as fast as, or even a little faster, but the Sony 14mm GM’s combination of breadth, speed, and compactness sets it apart. Factor in the the distortionless corner-to-corner sharpness I saw, and I think I’m ready to declare the Sony 14mm f/1.4 GM my perfect night lens. 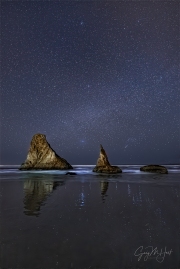 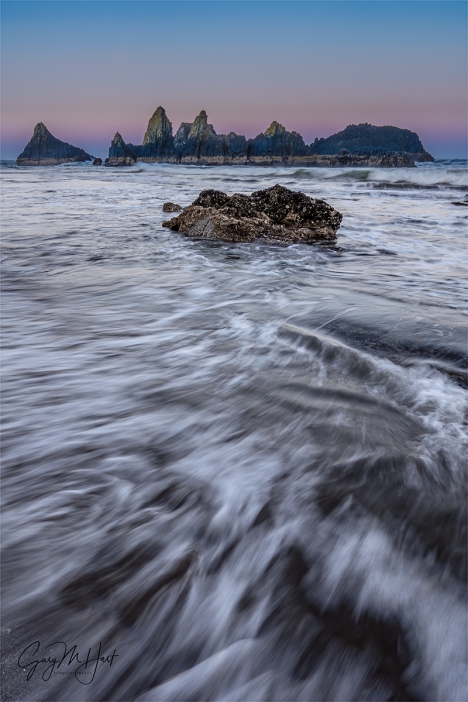 In the Surf, Seal Rock, Oregon