Probably the number one question I’m asked about Yosemite is, “What’s the best season for photography?” My response always sounds like it was crafted by a waffling politician, but I swear I just don’t have the absolute answer everyone wants: Yosemite in spring is all about the water, a time when the vertical granite can’t seem to shed the winter snowpack fast enough; summer offers High Sierra splendor (Glacier Point, Tuolumne Meadows, the backcountry), with wildflowers, exposed granite, and gem-like lakes inaccessible most of the year; autumn is when trees of yellow and red mingle in mirror-reflections and carpet the forest floor with color; and winter is the sunset fire of Horsetail Fall and the possibility (fingers crossed) of a glistening winter cathedral of white.

But surpassing all of this is the rare opportunity to combine the best of two seasons. For example, a few years ago, while in Yosemite Valley to photograph the fall color, I survived twenty-four hours of nonstop downpour, six inches of rain that sent Yosemite Valley into spring flood mode, giving me an opportunity photograph the fall color with the waterfalls at their spring peak. And last year, extreme drought conditions kept the high country open into January, providing access to High Sierra terrain in ice and snow conditions usually the exclusive domain of hardy wildlife.

And then there was last Saturday, when I was in Yosemite Valley to photograph this year’s fall color “peak” (always a moving target), only to encounter an early winter storm that deposited six inches of fresh snow in Yosemite Valley. Seriously folks, there are simply no words to describe Yosemite Valley with fresh snow, and adding an explosion of yellow and red is just off the charts. But rather than sink further into hyperbole, I’ll just submit this image, one of many from this trip that will surely require many hours to wade through.

(In addition to the snow and color, I also witnessed classic Yosemite clearing storm conditions, but that’s a story for another day.)

I’ve been doing this photography thing long enough to have learned how to separate my experience from my camera’s, to appreciate what I’m seeing without forgetting that my camera “sees” it differently. On this autumn morning I wanted capture the best of everything going on—fresh snow (duh), fall color, and reflection—easy for stereoscopic eyes embedded in a swiveling head, but not so easy to capture in a single, two-dimensional frame. With some ideas of how I might accomplish this, I beelined to this hidden spot along the Merced River, a little downstream from Bridalveil Meadow.

Once there I had to move around until all the elements—snow-covered rocks, floating leaves, reflection, and El Capitan—fell into a coherent relationship: Too far to the right and I’d lose El Capitan’s reflection behind the rocks; too far to the left and I’d be in the frigid river (not that there’s anything wrong with that). As it was, I was balanced on an icy rock with my tripod in two feet of water (and thanking the photography gods for live-view).

All of the “action” in the scene was along a line starting at my feet and terminating at El Capitan, so the decision to go vertical was easy—including everything on my line in a horizontal composition would have introduced all kinds of superfluous real estate on the left and right, and required me to compose so wide that El Capitan would have shrunk to virtual insignificance. I really liked the large, submerged  leaf right in front of me and used it to anchor the bottom of my frame. And since the sky above El Capitan was mostly gray clouds, I composed as tightly as possible above El Capitan.

Top and bottom decided, I moved back as far as I could to increase my focal length and maximize El Capitan’s size as much as possible. Wanting sharpness throughout my frame, I stopped down to f16 and focused on the leaf frozen to the rock in the lower center, about five feet away. (An experience-based guess—my iPhone, with its hyperfocal app, was buried in a pocket several layers deep, and I was reluctant to disturb my precarious balance on the slippery rocks.) I was extremely careful orienting my polarizer, turning it slowly, multiple times, until I was confident I’d found the ideal balance between removing sheen on the leaves without erasing the reflection in the river. A three-stop soft graduated neutral density filter held down the brightness in the sky. Click.

In Lightroom I warmed the image a little to remove a blue cast in the snow, and applied standard exposure adjustments to subdue highlights and open shadows. In Photoshop I dodged and burned to hide (minimal) unwanted shading introduced by my GND, to further darken the clouds, and to bring out the reflection somewhat. And I gave all but the scene’s brightest and darkest areas a slight wiggle in curves for contrast. 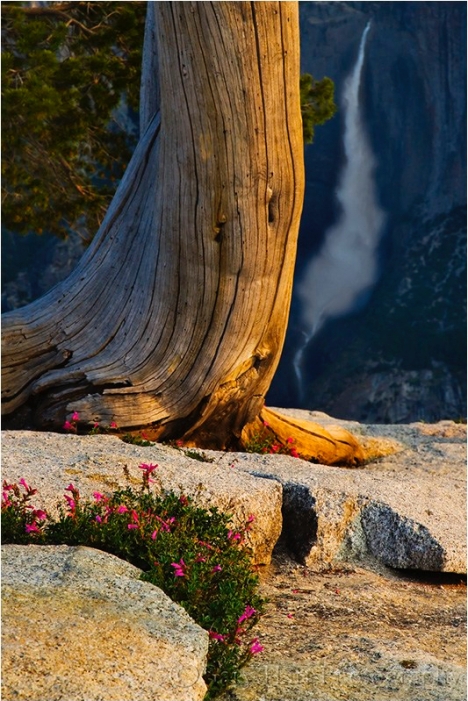 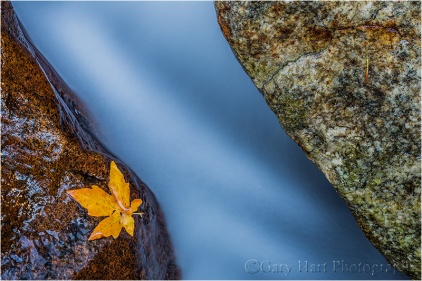 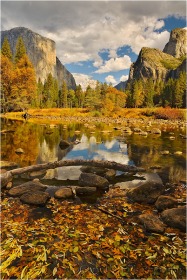 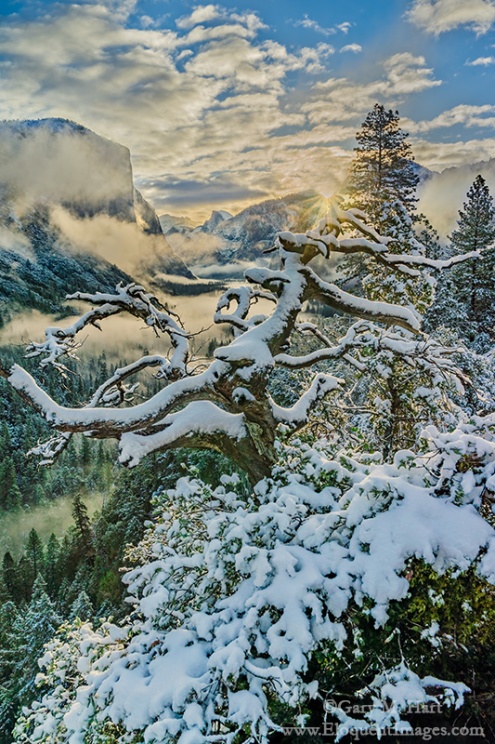 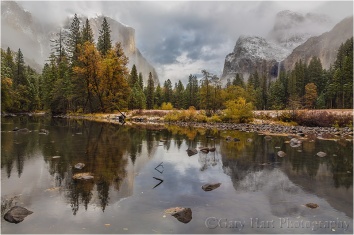 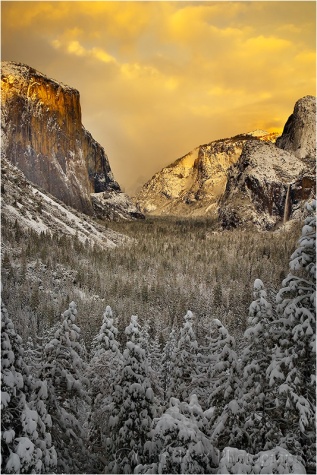 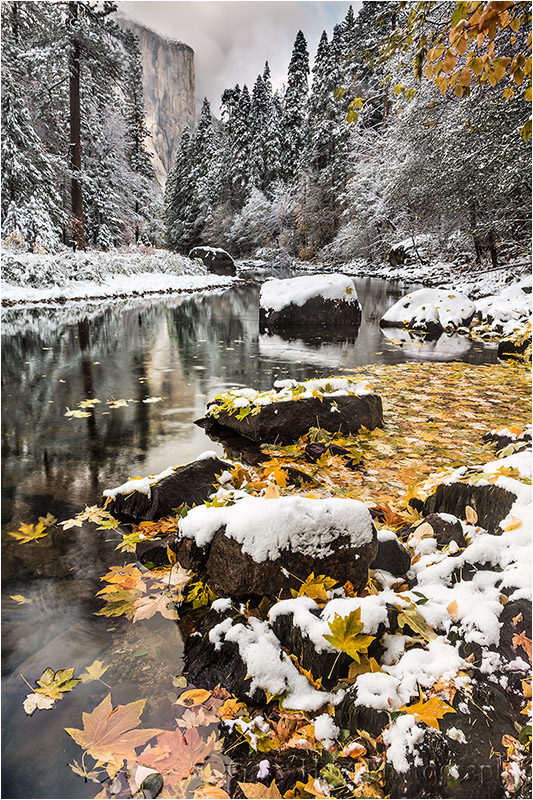 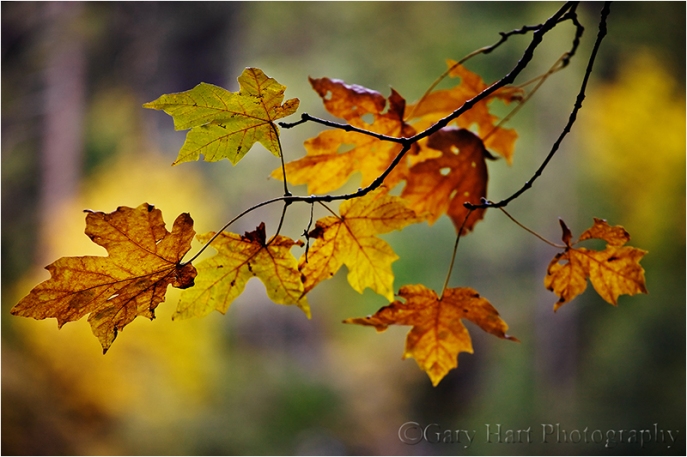 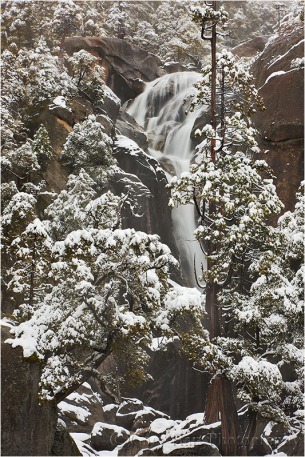 12 Comments on “Fall into winter”