Too close for comfort

After wrapping up our first Grand Canyon Monsoon workshop, Don Smith and I stayed a couple of extra nights on the North Rim to check-out potential locations for the second workshop. Saturday morning Don and I left our cabin with every intention of scouting (I swear) some remote, west-facing vista points, but black clouds and rolling thunder in the east (which we already knew quite well) gave us pause. The farther we drove, the blacker the clouds became, and the weaker our resolve to go scouting. A jagged bolt on the ridge north and east of the highway (a sign?) was more than enough to convince us to scuttle the scouting plan and beeline to Point Imperial.

With a 200 degree-plus east-facing panorama that includes the Vermillion Cliffs, the Painted Desert, the sheer walls of the Mosaic Canyon, and many named and unnamed red ridges and monuments, Point Imperial is one of my favorite North Rim vistas. By the time we arrived, the lightning was firing every thirty seconds north of us, well beyond the closest ridge. Gear in hand, I scrambled quickly down onto the rocks beneath the designated vista point for a better view—nobody moves faster than a photographer who feels like he’s missing the show (or so I thought). Don, a month out from knee replacement surgery, stayed up above, near the railed vista area.

Soon my Lightning Trigger had my camera firing away, usually at unseen bolts (it detects flashes obscured by clouds, or too distant for the eye), but occasionally at photogenic strikes too distant for the thunder to reach me. For the first thirty minutes the sky overhead was mostly blue and I watched with very little anxiety as the rain curtain with the most activity drifted slowly eastward. But when a thunder clap rolled across my exposed vantage point I glanced upward and saw nothing but angry clouds. So caught up in the awe of the moment, I’d failed to realize that the lightning frequency had intensified, and now some of the ridges I’d been photographing had disappeared behind an advancing downpour that looked that someone had opened a drain in the sky and released all the water in Heaven. Somewhat uncertain of my safety, I found comfort in the knowledge that the vista point above me still teamed with gaping tourists who surely knew better than this life-long California resident.

My comfort turned to concern when a rapid series of pulses drilled all the way down to the canyon floor just off to my right: One-thousand-one, one-thou… Boom! Hmmm. Maybe just a couple more frames…. Then I got the idea that, since it wasn’t raining on the point, I would leave my camera out to capture the action while waited in the car for the lightning to pass. About two steps into my controlled retreat the sky exploded. While I was pretty sure I’d broken land speed records descending the rocks when I arrived, that feat didn’t come close to the speed with which I flew back up to the car. Phew. Then the rain arrived, and suddenly my idea of leaving the camera out didn’t seem quite so brilliant. So, with rain (mixed with marble-size hail) falling, for the second year in a row, I performed a heroic rescue. Once again, with no regard for my personal safety, I dodged raindrops, hailstones, and lightning bolts (well, two out of three) to liberate my camera from the jaws of death.

Shortly thereafter the advancing column of water marched over us and set up camp. We eventually decided to move on to other locations, and while we saw lots of lightning, some of it too close to even start counting the seconds, we weren’t able to find a vantage point far enough removed from the action for photography. But for nearly an hour on Point Imperial, we had it as good as I could have imagined. 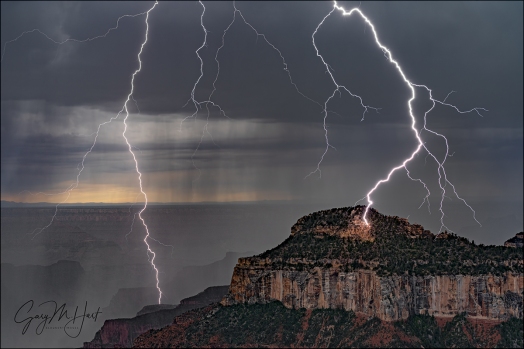 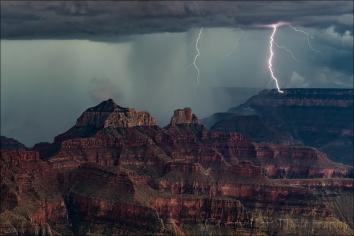 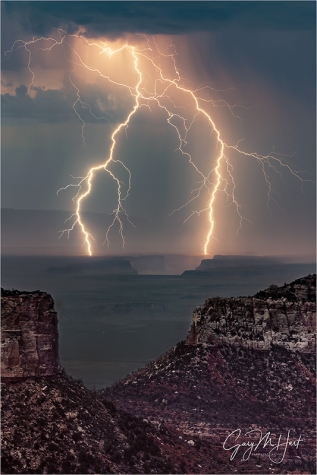 ← Last Light
The reason I do this →

8 Comments on “Too close for comfort”