Made in the shade 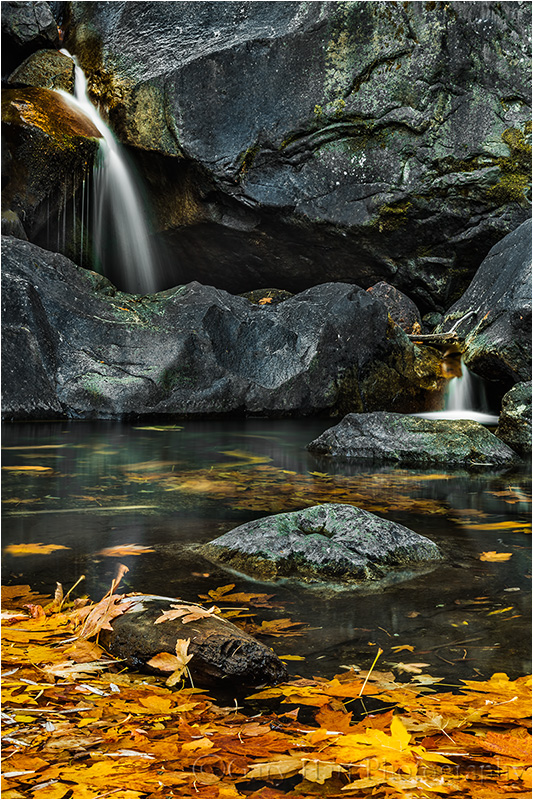 Imagine that you want to send an eight-inch fruitcake to your nephew for Christmas (and forget for a moment that you’ve been come that relative), but only have a six-inch box. You could cut off one end or the other, squish it, or get a bigger box. If the fruitcake represents the light in a scene you want to photograph,  your camera’s narrow dynamic range is the box. Of course the analogy starts to fall apart here unless you can also imagine a world where box technology hasn’t caught up with fruitcake recipes, but the point I’m trying to make is that whether it’s fruitcake or light, when you have too much of something, compromises must be made.

So, forgetting about fruitcakes for a moment, let’s look at this image of Bridalveil Creek in Yosemite. In full daylight on a sunny day the creek would have been a mix of sunlight and shade far beyond a camera’s ability to capture in a single frame—photographing it would have forced me to choose between capturing the highlights and allowing the shadows to go black, or capturing the shadows and allowing the highlights to go white. But photographing the scene in full shade compressed the dynamic range naturally, to something my camera could handle—suddenly everything was in shadow, and all I needed to do was keep my camera steady enough for the duration of the shutter speed necessary to expose the scene at the f-stop and ISO I chose.

This illustrates why “photographer’s light” is so different from “tourist’s light.” It also explains why your family gets so irritated when you base your vacation stops on when the light will be “right.” (Or, if you (wisely) defer to your family’s wishes, you get so frustrated that your vacation photos don’t look like the photos that show-off in your camera club submits for every competition.)

I love photographing a colorful sunset as much as the next person, but I’m never happier as a photographer than when I’m able to play with a pretty scene in full shade. Overcast skies are great because they allow me to photograph all day, but because clouds are never a sure thing, at every location I photograph I try to have weather-independent spots that will allow me to photograph when clear skies fill the rest of the landscape with sunlight. For example, Bridalveil Creek—nestled against Yosemite Valley’s shear south wall, much of the year Bridalveil Creek is in full shade until at least mid-morning, and then again by mid-afternoon. I never have to worry about what the light is here because I know exactly when I’ll find it in wonderful, (easy) low contrast shade.

The morning I captured this image was one of those blue sky days that can shut a photographer down, but I knew exactly where I needed to be. Arriving at about 8 a.m., I had several hours of shooting in easily manageable, constant light. As I scrambled up the creek toward the fall, I fired off a few frames but nothing stopped me until I came across this small pool swarming with recently fallen leaves. A couple of “rough draft” frames were enough to know that there was an image in here—I just needed to find it.

I suspected I needed to be closer, but between the large, slippery rocks and frigid creek, movement was quite difficult. Nevertheless, with each composition I seemed to manage to work my way a little closer, until I finally found myself at water’s edge. I started my composition at eye level, but that gave me too much water. To better balance the background cascade, middle-ground pool, and foreground leaves, I dropped down to about a foot above water level—this allowed me to include the foreground leaves with a telephoto that brought the cascade closer and shrunk the water separating the two.

Framing the scene this way required zooming to 60mm; because I wanted as much sharpness throughout the frame as possible, I stopped all the way down to f22 (an extreme I try to avoid). While the dense shade made the scene’s dynamic range manageable, it also made it quite dark; adding a polarizer to cut the glare subtracted two more stops. Sometimes I can increase my ISO enough to achieve a shutter speed that gives a little definition in the water, but given all the other exposure factors I just cited, my water was going to be blurred no matter what ISO I chose. So I decided to go the other direction and maximize my shutter speed to emphasize the motion of the leaves swirling on the pool’s surface.

FYI, your nephew would probably prefer an Amazon gift card. And if you must send a fruitcake, this one looks good (feel free to try it and send a sample).

9 Comments on “Made in the shade”