Four sunsets, part one: A Horsetail of a different color 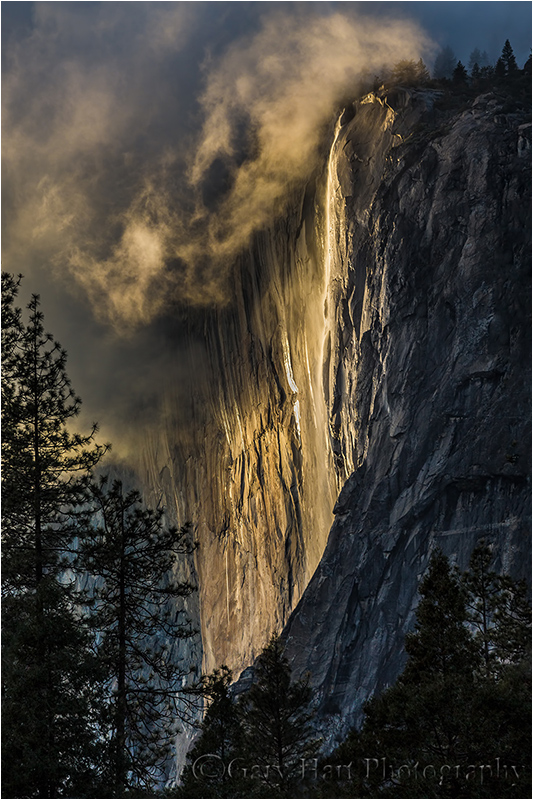 If the National Weather Service website were human, it would have long ago slapped me with a restraining order. You see, California is in the throes of an unprecedented drought that has shriveled lakes, rivers, creeks, and reduced even the most robust waterfalls to a trickle. With my Yosemite Horsetail Fall (which on a good day is rarely more than a thin white stripe on El Capitan’s granite) workshop just around the corner, recent weeks have seen me behave more like an obsessed infatuee, as if constant monitoring will somehow make my weather dreams come true. But so far this winter, each time I thought Mother Nature had winked in my direction, I found my hopes quickly dashed as every promising storm made an abrupt left into the open arms of the already saturated Pacific Northwest.

So, imagine my excitement when, just in time for this week’s workshop, an atmospheric river (dubbed the “Pineapple Express” for its origins in the warm subtropical waters surrounding Hawaii) took aim at Northern California. During the four days immediately prior to my workshop, our mountains were drenched with up to ten inches of liquid—not nearly enough to quench our three-year-and-counting drought, but more than enough to recharge Yosemite’s parched waterfalls for the three-and-a-half days of the workshop. Phew.

Monday morning I arrived in Yosemite to find, as hoped, the waterfalls brimming and Horsetail Fall looking particularly healthy. Eying Horsetail from the El Capitan picnic area a few hours before the workshop started, I suddenly remembered the stress that comes with other photographers counting on me for the bucket-list shot they’d traveled so far to capture. It occurred to me that hen Horsetail Fall is dry I can concentrate without distraction on Yosemite’s other great sunset options; when Horsetail is flowing, I need to decide whether to go for the notoriously fickle sunset light and risk no photographable sunset at all if it doesn’t happen. That’s because, not only does Horsetail Fall need water, the red glow everyone covets also requires direct sunlight at the exact instant of sunset—never a sure thing, even on seemingly clear days. And if Horsetail doesn’t get sunset light, there’s little else to photograph from its prime vantage points. With the forecast for the workshop’s duration called for a disconcerting mix of clouds and blue sky, our odds were even longer than ordinary. Compounding my anxiety was the full moon that I’d promised for workshop sunsets three and four (of four total sunsets)—if we don’t get Horsetail on sunset one or two, I’d have to decide between going for Horsetail or the moon. (And woe betide the workshop leader whose group watches a fiery sky or ascending moon from an unsuitable location—tar and feathers, anyone?)

During the orientation I did my best to establish reasonable expectations. I told the group that we’ll go all-in on Horsetail for sunsets one and two, and that if it doesn’t happen, I’ll decide our priority for sunsets three and four based on the conditions. What I meant was, we’ll go all-in for Horsetail on sunsets one and two, and I’ll hope like crazy it that does happen and I won’t have to decide anything for sunsets three and four. What followed was four sunsets filled with anxiety, each culminating with a rousing success—two our our successes were of the exactly-what-I’d-hoped-for variety, while the other two were far beyond what I could have imagined.

Sunset number one, above, was in the more than I could have imagined category. After the orientation I took the group to Tunnel View, where we kicked off the workshop with Yosemite Valley beneath a nice mix of clouds and sky. From there we headed to the night’s sunset destination, my favorite Horsetail Fall view on Southside Drive. A few years ago I could pull in to this spot a few minutes before sunset and be relatively confident of finding enough room for my entire group. But this spot is no longer a secret; on the drive there I crossed my fingers that the storm had kept most of the day-trip photographers home—if not, Plan B was to loop over to the El Capitan picnic area where there’s more parking and ample room for many photographers. On this afternoon my concerns were unwarranted as we found only two other cars there, and nobody down by the river where I like to set up. And set up we did, with a little more than an hour to wait. From the time we arrived the clouds were nice, but with no sign of the sun the scene was a little flat, with gray the predominant color—nevertheless, I encouraged everyone to be ready because it can change in a heartbeat. Little did I know….

As we waited we watched Horsetail Fall, spilling more water than I’d seen in years, play peek-a-boo with the storm’s swirling vestiges. But without direct sunlight, the scene, while pretty, wasn’t spectacular. Then, shortly before 5:00, without warning the clouds lit up like they’d been plugged in and I (unnecessarily) told everyone to start shooting, that we have no idea how long this light will last. For the next ten minutes we were treated to a Horsetail Fall show the likes of which I’ve never seen. Suddenly the exposures, quite easy in the flat gray, became quite tricky and I spent lots of time bouncing between workshop participants struggling with exposure. I managed to get off a handful of frames, some fairly wide, and a few a little tighter like this one. When the light faded we were left with cards devoid the “classic” Horsetail image; instead, we had something both beautiful and unique, a difficult combination for such a heavily photographed phenomenon. From the conversations in the car, and from images shared later during image review, it was pretty clear that everyone else was as happy as I was. Nevertheless, I sensed most still wanted the red Horsetail image, and I was ready to give it one more try with sunset number two.

Next up, sunset number two: The “classic” Horsetail.

Read when, where, and how to photograph Horsetail Fall

Join me next February when we do it all over again

18 Comments on “Four sunsets, part one: A Horsetail of a different color”