Four sunsets, part three: A marvelous night for a moondance 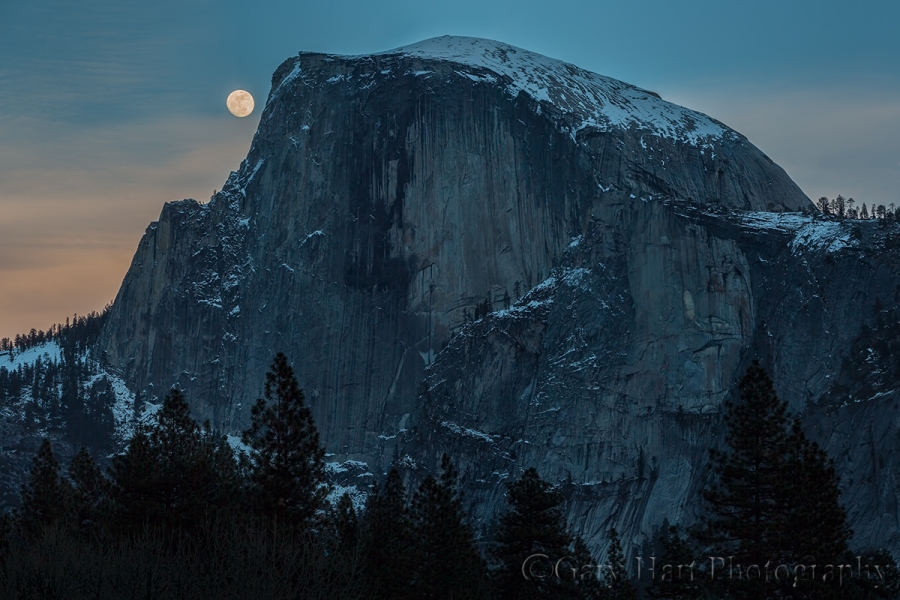 How many Yosemite moonrise images are too many? I have no idea, but I’ll let you know as soon as I find out.

I stand on the bank of the Merced River, eyes locked on the angled intersection of Half Dome’s sharp northeast edge and its adjacent, tree-lined ridge. If the clouds cooperate, and I’ve done my homework right, a nearly full moon (96%) will be poking above this intersection any minute. We’d been fortunate the first two sunsets of my workshop; dare I hope for one more?

If the moonrise happens as I plan (hoped), the sight could rival what we’d gotten from Horsetail Fall on the first two nights of our workshop. But right now the sky behind Half Dome is smeared with thin-ish clouds—how thin I won’t know until the moon appears (or doesn’t). Gazing heavenward, I find it odd that a moonrise, something that can be predicted with such absolute precision, is so subject to weather’s fickle whim. And the clouds aren’t my only concern—just a half-degree error in my plotting would put the moon behind Half Dome and out of sight.

Few things in nature thrill me more than a moonrise. Camera or not, crescent or full, I love everything about a it: the obsessive plotting and re-plotting that gets me out there in the first place; the hand-wringing anticipation while I await the moon’s appearance; the first white pinprick of moonlight on the horizon (Is that it? There it is!); the ridge-top evergreens silhouetted against the rising disk; the glowing sphere hovering above the darkening landscape; and finally, the moonlit landscape beneath a star-studded sky. Everything.

So it shouldn’t surprise that virtually all of my photo trips—workshops and personal—are scheduled around the moon’s phase and some condition of the night sky. Sometimes I target a full moon, sometimes a crescent, and sometimes I want no moon at all (for dark skies that reveal the most stars)—the choice depends on the kind of moonrise and/or night photography I think best suits the landscape I’m traveling to photograph. But because this workshop is timed to coincide with the few February days that Horsetail Fall might turn a molten red at sunset, a calendar window I shrink even further to avoid the crowds that flock a little later in February, the moon is rarely a priority when I schedule the Horsetail Fall workshop. But I still check. And when I started planning my 2013 Yosemite Horsetail Fall workshop a couple of years ago, I was thrilled to discover that not only could I could time this trip for a full moon, I’d also be able to align that moon with Half Dome at sunset. Twice.

I check my watch: 5:13. Sunset is 5:35; the moon should appear almost adjacent to Half Dome at about 5:15, then slowly rise, like a ball rolling uphill along Half Dome’s left side. By 5:30 the disk will have almost reached Half Dome’s summit, less than its own width with from the granite face. That is, if I’ve done my homework right. 5:14.

I’d done all my figuring months in advance, which of course didn’t stop me from double-, triple-, quadruple-, and so-on-checking my results in the days leading up to my waiting beside the Merced River with a dozen or so other photographers. Part of my anxiety is the particularly fortuitous alignment of location, moon, and time that put the moon appearance above Half Dome right in my “ideal” sunset window as viewed from one of my favorite Yosemite locations. Not only does this spot provide a clear, relatively close view of Half Dome, it also is at a nice, reflective bend in the Merced River. Even without the moon this is a nice spot, end everyone in the group seems to be finding things to photograph. But I want the moon tonight. Really, really want the moon.

(You really don’t need to read this section)

My moonrise/set workflow was in place long before smartphones apps and computer software laid it all out for any photographer willing to look it up. But those tools are new tricks and I’m an old dog. So here’s how I’ve done it for years:

If this all sounds convoluted, that’s probably because it is. I suggest that you try something like The Photographer’s Ephemeris or Photo Pills, which does all this for you. But like I say, that’s a new trick….

I squint, hoping to engage my x-ray vision enough to make out the moon’s outline through the clouds. Nothing. With conditions fairly static, the group has gotten their shots and is chatting more than clicking. Moon or not, the photography will improve as the light warms toward sunset. I walk uphill, away from the river and slightly upstream to improve my angle of view. Still nothing. (Did Ansel Adams experience this angst?)

We’ve reached the time that I expect the moon to appear. I’ve been plotting the moon long enough to be fairly confident within about one moon’s width (a half degree in either direction) of where it will rise, and within plus/minus two minutes of when it will rise. But the whether of seeing a moonrise depends on, well, the weather. Will rain, snow, or even just a rouge cloud shut us out?  There’s really no way to know until the day arrives. And sometimes, for example this very instant, I can’t tell whether the sky will cooperate until I actually see the moon.

I’ve learned that the best time to photograph a full moon (when I say “full,” I often mean almost full, generally between 95 and 100 percent of the complete disk illuminated) is during a ten minute window straddling sunset. Much earlier and the light isn’t particularly interesting, and there isn’t enough contrast between the moon and the sky for the moon to stand out dramatically; much later and there’s too much contrast between the moon and everything else in the scene for the camera to handle.

Choosing this location introduces another unknown. Remember when I said that I can pinpoint the moonrise within about its width? Well, in this case that margin of error is just enough to give me pause, because rising slightly to the right of where I think it will rise puts the moon behind Half Dome until about five minutes after sunset. Sentinel Bridge, just a short distance downstream, would have been safer, but the Sentinel Bridge Half Dome shot is far more common, the bridge is usually teaming with people at sunset, and the moon would have been a little higher in the sky during “prime time.” So here we stand.

What’s that faint white blob in the clouds? Without saying anything I squint and look closer. Sure enough, there it is, barely visible, less than one degree above the ridge (its rise above the ridge a couple of minutes ago must have been obscured by the clouds), pretty much where I expect it. Phew. I announce the moon’s arrival to the rest the group, but need to guide their eyes to it. As everyone’s attention returns to their cameras, I cross my fingers for the clear sky in its path to hang in there until at least sunset.

The moon finally climbs above the clouds and I exhale. Still daylight bright, it now makes a striking contrast against the darkening sky. For the next fifteen minutes we shoot continuously, pausing only to recompose and monitor the highlights. Compositions, which I’d had everyone practice before the moon arrived, range from wide reflections that reduce the moon to a tiny accent, to tight isolations of the moon and Half Dome’s face.

As sunset approaches, the biggest concern becomes those lunar highlights—too small to register on the camera’s histogram, the moon’s face is easily blown out as we try to give the darkening foreground more light. Before we started I made certain everyone has engaged their camera’s Highlight Alert (“blinking highlights”) feature. They all know that when the moon starts flashing, they’ve reached the exposure threshold and must back off on their exposure and lock it in (a few “blinkies” are recoverable in Lightroom or Photoshop, but if the entire disk is flashing, the moon’s detail is probably lost for good)—while the moon will remain the same brightness (can’t take any more exposure), from that point on the foreground will continue darkening until it becomes too dark to photograph. Then we go to dinner.

Like everyone else, I used a variety of compositions. I already have a wide reflection image from a prior shoot, so the image I share here is a moderate telephoto—any tighter (to enlarge the moon further) would have truncated some of Half Dome’s face, something I just cant bring myself to do.

We finally wrapped up at about 5:45, when long exposures to bring out detail in the dark landscape made capturing detail in the bright moon impossible. Everyone was pretty thrilled at dinner, and even though the clouds thickened and washed out our planned moonlight shoot, there were no complaints. And little did we know, Mother Nature had concocted a grand finale for our final sunset.

A Gallery of Yosemite Moons 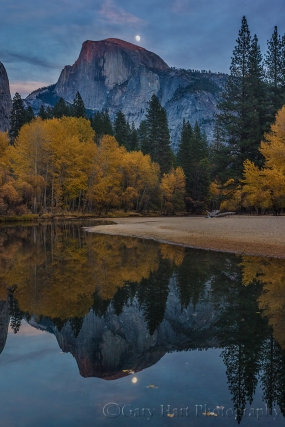 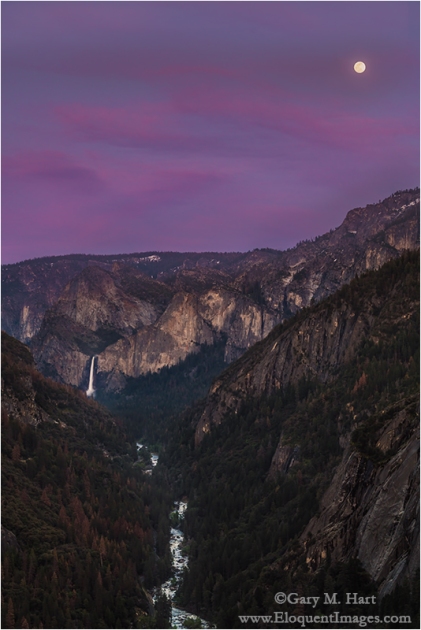 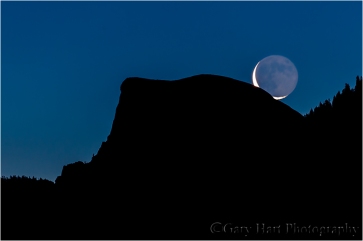 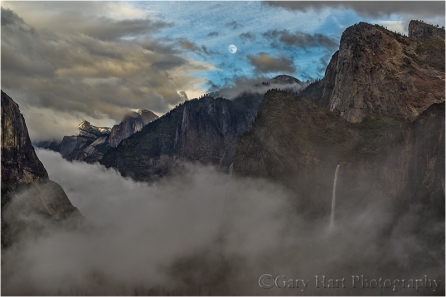 15 Comments on “Four sunsets, part three: A marvelous night for a moondance”