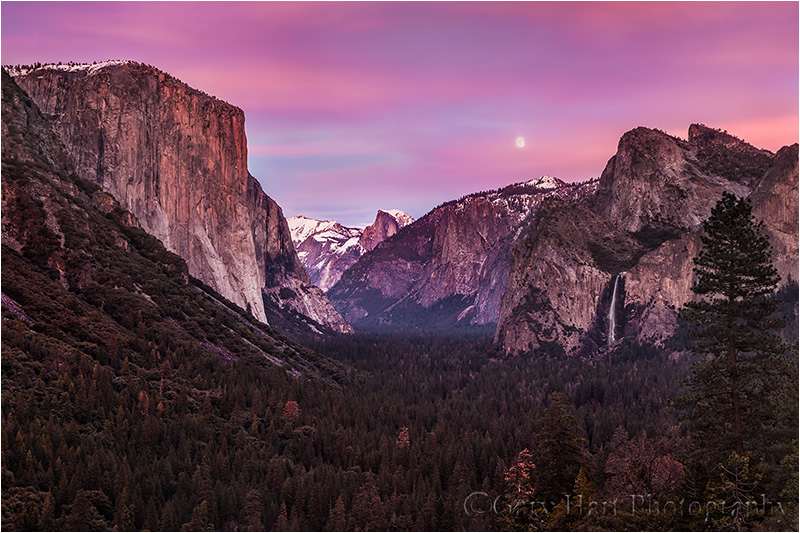 What I love most about photography is its ability to surprise me. Case in point: the final sunset of my recent Yosemite Horsetail Fall workshop, which delivered just one surprise after another.

I’d told my group that we’d get to photograph another moonrise on our last evening, but only if the clouds cooperated. And as the afternoon wore on, it seemed that the clouds that had cooperated so wonderfully all week wouldn’t be on our side tonight. Assembling everyone on the sloped granite above Tunnel View, I eyed the thin (and shrinking) strip of blue sky on the horizon above Half Dome and checked my watch: 5:10—in about fifteen minutes (less than ten minutes before sunset), with no clouds we’d see a full moon poke into view between Half Dome and Sentinel Dome. But our vantage point gave me a clear view of the clouds racing in that direction and our prospects weren’t good. Rather than stress (much), I stayed philosophical: We’d already had three fantastic sunset shoots, expecting a fourth would be downright greedy.

Nevertheless, it was fun to watch the clouds sprint across the sky and pile up behind Half Dome, changing the scene by the minute. Waiting there, I had thoughts about the throngs gathered on the valley floor, hoping (praying) for Horsetail Fall to light up. My group had been lucky on our first two sunsets, but tonight there’d been no sign of sunlight for at least thirty minutes, and with the cloud machine working overtime behind us, I was pretty certain the Horsetail crowd was in for disappointment.

Anticipating a moonrise, I’d gone up our vantage point with just my tripod, 5DIII, and 100-400 lens. Knowing exactly where the moon would appear, my composition was set well in advance—tight, with Half Dome on the far left and the moonrise point on the far right. But without the moon, I realized that the best shots would likely be wide, so I zipped back to the car and returned with another tripod (doesn’t everyone carry two?), my 1DSIII, and my 24-105. Sitting on the (cold) granite, a tripod on my left and my right, I quickly composed a wide shot with my new setup and resumed my vigilance.

By 5:25 I’d stopped watching the incoming clouds, which were streaming in faster than ever, and turned my focus to the moon’s ground-zero, willing the clouds to part for its arrival. At exactly 5:27 and as if by magic, the white glow of moon’s leading edge burned through the trees downslope from Sentinel Dome. I did a double-take—it was as if the moon had pushed the cloud curtain up and slipped beneath. I shouted, “There it is!” and the furious clicking commenced. We ended with about sixty seconds of moonrise, just long enough for the moon to balance atop the trees, before the clouds settled back into place and snuffed it out.

But the surprises had only just begun. While the whole group still buzzed about the moon, I noticed a faint glow on El Capitan. Not quite believing it (and not wanting to jinx anything),  I kept my mouth shut and looked closer. But when the glow persisted, I had to point it out, if for no other reason than confirmation that I wasn’t hallucinating. Within seconds all doubts were dispelled as El Capitan exploded with light from top to bottom. So sudden and intense was the light that I’m surprised we didn’t hear the roar from the Horsetail Fall contingent in the valley below us. And rather than fade, as it often does, the light intensified, warming over the next couple of minutes from amber to orange to red. Soon the color deepened to an electric magenta and spread across the sky and all those clouds I’d been silently cursing just a few minutes earlier became allies, catching the color and reflecting it back to the entire visible world.

Giddy about the show, and focused on my two cameras, I’d long given the moon up for dead. So imagine my surprise when, just as the color reached a crescendo, there the moon was, burning through a translucent veil of clouds. So expansive was the scene that a telephoto couldn’t do it justice, so all of my images following the moon’s resurrection were captured with my 5DIII and 24-105. Exposure became trickier by the minute in the advancing darkness, and eventually, pulling detail from the valley without completely blowing out the moon required a 2-stop hard graduated neutral density filter.

Honestly, this was one of those moments in nature that no camera can do justice. I did my best to come find compositions that captured the majesty of Yosemite Valley, the vivid sky and the way it tinted the entire scene, and that Lazarus moon. But take my word for it, you just had to be there….

Fire on the Mountain, El Capitan and Horsetail Fall, Yosemite

Join me next February when we do it all over again

← Four sunsets, part three: A marvelous night for a moondance
A rite of spring →