The right stuff with the left brain 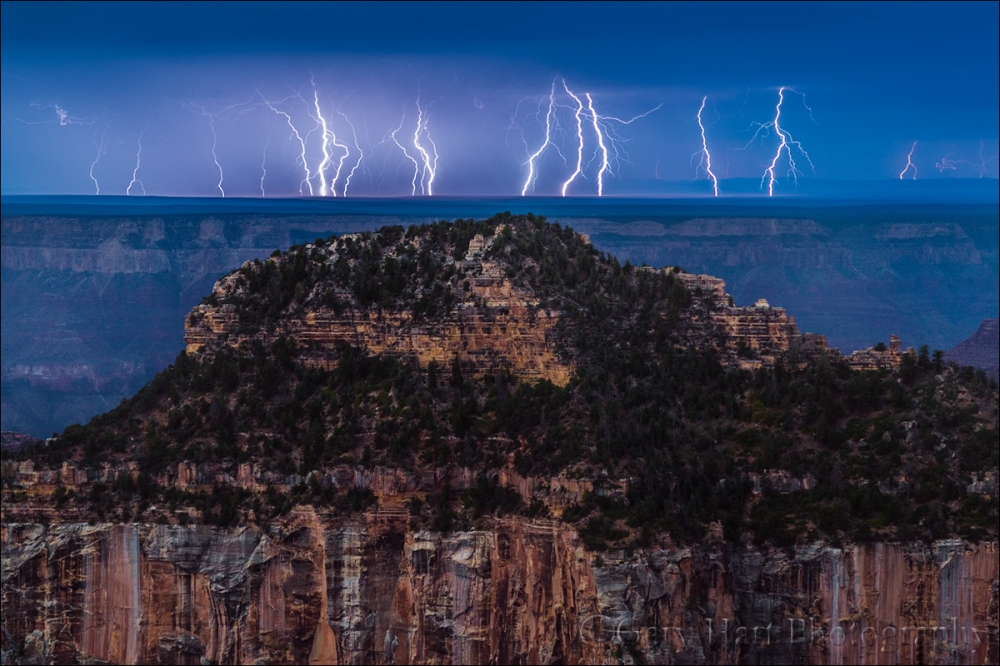 Writing about “The yin and yang of nature photography” a couple of weeks ago, I suggested that most photographers are limited by a tendency to strongly favor the intuitive or logical side of their brain (the so-called right-brain/left-brain bias). Today I want to address those intuitive (right brain) thinkers who feel it’s sufficient to simply trust their compositional instincts and let their camera do the thinking.

It was a dark and stormy night

There is absolutely nothing creative about this lightning image from last Monday night at the Grand Canyon. This single click image (one frame—no blending) was captured from the viewing deck of the Grand Canyon Lodge on the North Rim during a nighttime thunderstorm across the canyon. Compounding the darkness of night and the Grand Canyon’s dark pit were dense clouds that obscured a waning gibbous moon—the canyon so dark that I couldn’t see well enough to create anything. To compose, I simply aimed my camera in the general direction the lightning was most active, clicked, and hoped. The original raw file needed cropping for balance, to remove a few lights from the South Rim Village, and to correct a severely tilted horizon.

Don Smith and I had just brought our workshop group back from a sunset shoot at Point Imperial. Some headed back to their cabins to recover from a day that had started at 4:30 a.m., while a few veered to the “saloon” (it’s not quite as raucous as it sounds) for a beer or glass of wine. Lugging my gear back to my cabin, flashes in the clouds above the lodge indicated lightning was firing somewhere in the distant south and I detoured down to the lodge’s viewing deck to check it out. Through the two-story windows of the inside viewing room and before I even stopped walking I saw bolts landing due south across the canyon, and along the rim down the canyon to the west—violent, multi-stroke bolts that illuminated the clouds and canyon walls with their jagged brilliance.

I set up on the west viewing deck with just enough twilight remaining to compose, starting with a composition I liked—it wasn’t in the direction of the most activity, but I’d already seen a couple of strikes in that direction and was hoping I’d catch a bolt or two. But as the sky darkened and my exposures failed to capture anything, it became clear the activity was shifting west and I’d need to adjust my composition. By then the darkness was nearly complete and I simply centered my frame on the black outline of Oza Butte in front of me, going wide enough to ensure maximum lightning bolt captures.

While finding focus for my earlier compositions had been a little tricky, there had been enough light to make focus manageable. But now the absence of any canyon detail made getting a sharp frame extremely problematic using the conventional focus methods. (Contrary to a misconception that lingers from the old film days, when everyone used prime lenses, you can’t simply dial a zoom lens to infinity and assume you’ll be sharp.)

Once I decided on my composition (and focal length), I pointed my camera (still on the tripod) in the direction of the Grand Canyon Village lights on the South Rim centered the brightest light in my viewfinder. I engaged live-view, magnified the scene 5X, re-centered the target light, magnified 10X (5X and 10X are the two magnification options on my 5DIII), and slowly turned my focus ring until the cross-canyon light shrunk from a soft blur to a distinct point. I then swung my camera back toward my the butte and recreated my composition (without changing my focal length).

Because my earlier exposures had been 30 seconds at ISO 1600 ISO, designed to capture just one or two strikes in a composition I liked, but short enough to adjust things relatively frequently. But since my new strategy was to fire directly into the mouth of the beast, and lacking a composition in which I had any confidence, I decided on a long exposure that would capture enough lightning to overcome the unknown but likely relatively bland composition. Instead of 30 seconds, I wanted at least 12-15 minutes of exposure in Bulb mode (instead of a shutter speed that’s fixed at the moment of the click, in Bulb mode the shutter remains open until I decide it’s time to close it).

“You didn’t tell me there’d be math…”

Doing the math: Because each doubling of the shutter speed adds one stop, a 15 minute exposure would add about (close enough to) 5 stops of light to my original 30 seconds:

Adding five stops of exposure time meant that keeping the amount of light in my next image unchanged, I’d need to subtract a corresponding 5 stops of light in ISO and/or aperture. But since I thought that my previous exposure was at least a stop too dark, and I guessed that the sky would be darkening even more, I decided to drop only 3 stops, from ISO 1600 to ISO 200 (halving the ISO reduces the light by 1 stop). I made my ISO adjustment, clicked my shutter and locked it open on my remote, checked my watch, then sat back and enjoyed the show.

The 12-15 minute plan was just a guideline—since the difference between 10 minutes and 20 minutes would only be 1 stop, my decision for when to close my shutter had quite a bit of wiggle room. In this case after about 15 minutes I noticed the lightning was slowing down and shifting further west, so I wrapped my exposure and recomposed for my next shot. As it turns out, the next frame only captured a third of the number of strikes this one got because the most intense part of the show was winding down.

The worst is over

If you’re one of those “I have a good eye for composition, but…” folks, congratulations for sticking with me this long. I hope this illustrates for you how important understanding metering and exposure basics, and managing them with your camera, is to maximizing your capture opportunities. This technical aspect of photography isn’t something that should intimidate you—if you can multiply and divide by 2, you have all the math skills you need to figure things out on the fly.

I suspect, and in fact have observed, that most “intuitive” photographers are limited more by their belief that they can’t do the technical stuff than they are by an actual inability to it. What seems to have happened is that they’ve been buried by an avalanche of well-intended but less significant technical minutia covering everything from exposure (e.g., “RGB histograms” and “exposing to the right”), to focus (e.g., “circles of confusion” and “hyperfocal distance”), to printing (e.g., “colorspace” and “monitor calibration”). Many of these things are indeed quite important, but nobody should be expected to tackle them until they have a firm grasp on the basics of metering and exposure, and managing the complementary relationships connecting shutter speed, aperture (measured by f-stops), and ISO. I recommend that you ignore all the other technical buzz until this basic stuff makes sense—not only will you be a better photographer for it, you’ll find that the more “complex” stuff isn’t nearly as complex as it sounds.

Then go out in your backyard and practice!

You can’t imagine how thrilling it was to watch these bolts firing several times per minute. Not only were they landing in the direction of my composition, they were also going all along the rim to the west. Witnessing this display was an experience I’ll never forget, and photographing it was a highlight of my photography life. 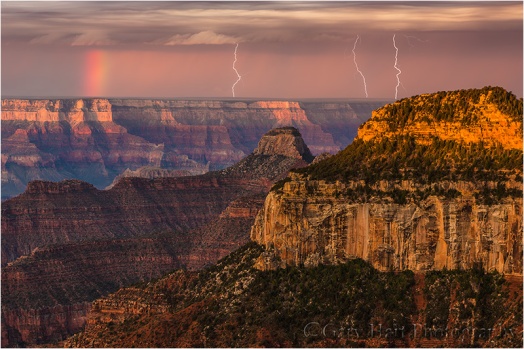 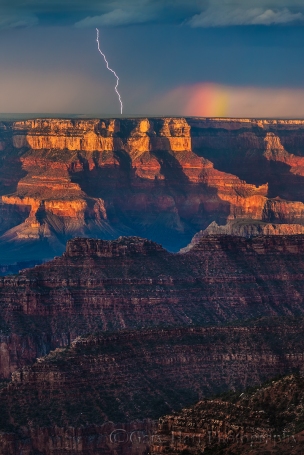 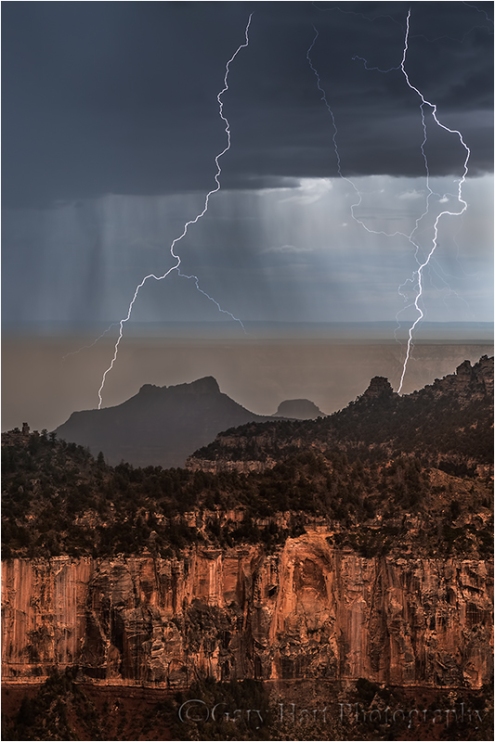 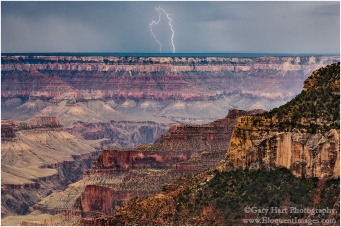 ← Release the brocken!
Roll over Ansel →

11 Comments on “The right stuff with the left brain”