Last week I joined (contributed to) the elbow-to-elbow fray in Upper Antelope Canyon. Helping Don Smith with his Northern Arizona workshop, I’ve done this every year for nearly ten years (I’ve lost exact count). While I never tire of the cathedral-like power of beaming, bouncing sunlight, I find that, like most beautiful, easily accessed locations, it’s difficult to separate Antelope Canyon’s beauty from its mayhem.

Upper Antelope’s mayhem is multiplied by narrow, twisting sandstone walls that contain, reflect, amplify, and spread every sound along the canyon’s entire length, and make it impossible to move without dodging, brushing, or jostling another human. It’s a claustrophobe’s worst nightmare—even people who’ve never experienced claustrophobia find the experience unnerving.

It’s in these environments that I most appreciate the limited perspective of a still camera, its ability to isolate the essence of a scene and separate it from all sensory distractions. As difficult as the Upper Antelope Canyon experience is, I can visit my images later and remember only the best things about being there. Gone is the noise and congestion, tripods and camera flashes, and all the concomitant distraction and anxiety. I’m left with graceful curves in layered sandstone polished smooth by water, wind, and time, and the heavenly glow of reflected sunlight.

Though the workshop group was ours, Don and I must defer to our Navajo guide when we’re in the canyon, which means we aren’t allowed to teach. Our job is mostly to not get in anyone’s way. While we do monitor the group to make sure no one’s missing an opportunity, much of our time is spent hanging in the back, waiting for the “prime” shots we’ll only get a chance to photograph if there’s time when everyone else is done. This has turned out to be a blessing for me, because it’s forced me to find my own stuff, especially stuff that’s on the walls above everyone’s head, or even straight up, at the ceiling.

The image here is a straight-up ceiling capture found while waiting for the group to finish photographing a shafting ray of sunlight further up the canyon. In the narrow confines of a crowded slot canyon, crouching to see through a viewfinder, or lying down to get beneath the camera, is not practical. It’s in these awkward situations that have given me a real appreciation for the Sony mirrorless bodies’ articulating LCD, which makes photographing these straight-up scenes about as difficult as glancing down at a cell phone.

Another advantage to the straight-up composition is that it has no top, bottom, left, or right. By rotating my camera on the tripod, I was able to turn the overhead opening into a diagonal, which I found more compelling orienting it horizontally or vertically. In fact, when I processed this image I decided to reverse the top and bottom of the image, resulting in an orientation that’s no different than if I’d have rotated my camera 180 degrees at capture (try doing that with conventional, straight-ahead image).

And finally, I just have to say something about the dynamic range of the a7R. The difference between the brightest highlights and darkest shadows in this scene was far beyond what I’d have attempted with my Canon 5D Mark III. And while my histogram told me I’d gotten the full range of tones, I didn’t completely believe it until I actually got it on my computer, pulled down the highlights, pulled up the shadows, and looked closely. 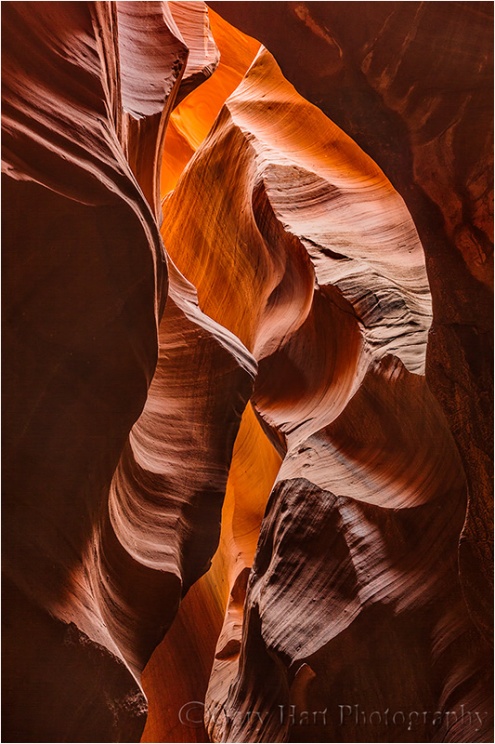 ← As far as the eye can see
Half Dome moonrise →