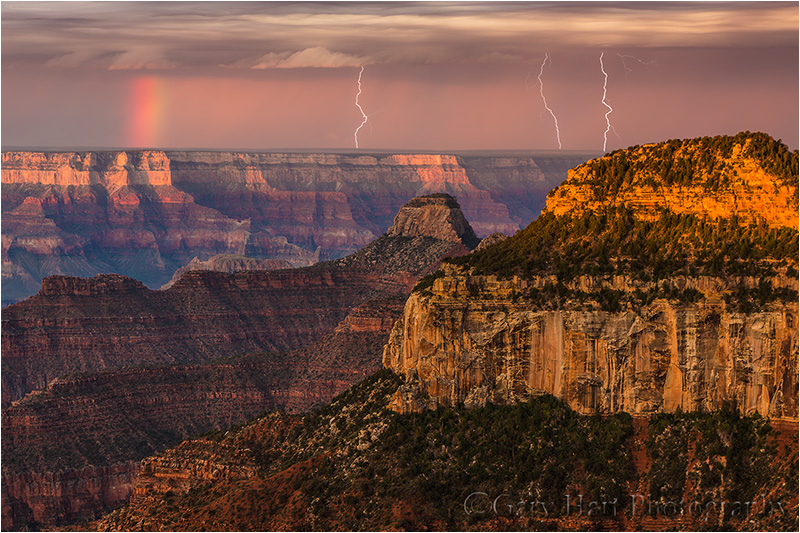 Three Strikes, Bright Angel Point, North Rim, Grand Canyon
This is a single, 1/3 second click that managed capture three simultaneous lightning strikes. Set up on a tripod, I’d composed to balance the frame between the rainbow and the area receiving the most strikes. Rather than try to manually react when I saw a lighting flash, I let my Lightning Trigger detect the lightning and click for me. I got many one and two bolt frames, but this is the only frame that captured three.
Canon EOS 5D Mark III
1/3 second
F/11
ISO 100
24-105 f4L lens

While I’ve been taking a little Holiday break from my blog, I have spent some of my non-family time reviewing my 2013 images. Given the number of trips I take, and images I click, it always amazes me how well I remember every detail of my favorites—who I was with and what the circumstances were, not to mention composition and exposure decisions that are still as clear in my memory as the day I took the picture. I’m guessing it’s that way for other photographers too, because I’m convinced that our best photography comes when we concentrate on those things that move us emotionally. For example, since I’ve always been something of a weather geek, it stands to reason that several of my favorites feature active weather. And another lifetime passion is astronomy, and while I didn’t consciously bias this year’s selections toward the celestial, that sure seems to be how it worked out.

I have lots of great stuff planned for 2014: my regular annual workshops in Death Valley, Yosemite, Hawaii, the Eastern Sierra; my second annual Grand Canyon monsoon workshop with Don Smith; a raft trip down the Grand Canyon in May (bucket list item). And on any photo trip, whether it’s a workshop or a personal trip, I research and plan to make sure the odds for something special are as high as they can be, but it’s usually the unexpected moments that thrill me most—those times when I set out with one intention and found something else, or was disappointed when weather or other conditions beyond my control derailed the original plan.

Case in point: I scheduled an entire workshop around Comet ISON, and while ISON fizzled, if I hadn’t been in Yosemite to photograph it, I never would have witnessed Valley View, decked out in ice, glistening in the light of a full moon. Or the Maui workshop, scheduled before I had any idea of Comet PanSTARRS, that just happened to coincide with the comet’s post-perihelion conjunction with the new moon. But the one that thrill me most was the above sunrise at the Grand Canyon, the final morning of our second workshop—Don and I were going to start the thirteen hour drive home later that morning, and others in the group had flights to rush off to. Given the bland weather forecast, it would have been easy to blow off the shoot and let everyone sleep in. But we got up in the cold and dark, all of us, and were treated to a two hour electric show that started in blackness and culminated with a rainbow as the sun peeked above the canyon’s east rim.

So, without further adieu, and in no particular order, here are my current 2013 favorites (click a thumbnail for a larger version with more info, and to start the slide show):

← Two out of three ain’t bad
Securing the border →