I don’t usually write a brand new blog in the middle of a workshop, but I have to share last night’s experience

Scanning the southern horizon from the view deck of Grand Canyon Lodge on the North Rim, I saw no sign of lightning. Far to the south was a somewhat promising curtain of rain, maybe 30 miles beyond the South Rim. With nothing to do until I met the group for our sunset departure, I found a composition I liked and pointed my camera (with Lightning Trigger engaged) in that direction.

Soon others joined me—with my lightning app showing activity 50 miles distant in the general direction my camera pointed, I made the call to bag the sunset shoot and put all our eggs in the lightning basket. (A decision I might not have made had this second workshop group already had the lightning success the first had). Turns out that was a good call.

About an hour later, when lightning started firing to the west, I stubbornly stuck with my composition, but instructed the rest of the group to point their cameras toward the more sure thing. My reasoning was that since I had over 100 lightning strikes from the first workshop, I could afford to be selective and take a chance on the composition I preferred, but everyone who hadn’t had a success should play the odds.

My storm completely fizzled, but the storm cell to the west was very active and appeared to be moving closer. I finally admitted defeat and gave up on my cell, turning my attention to the active cell just about the time we started hearing thunder. Within minutes the storm was on top of us and suddenly we couldn’t tell which thunder went with which bolt.

Huddled in relative safety beneath the lodge’s lightning rods, the next 20 minutes provided the most jaw-dropping electrical this California boy has ever seen—maybe all lightning storms are this spectacular, but I’ve never been that close. We gave everyone the option of retreating to the lodge’s enclosed viewing deck, but everyone steadfastly stuck to their tripods. The lightning was firing two or three times per minute, each strike so close that we couldn’t couldn’t fit the entire bolt in our frame. Then the wind kicked up and soon thereafter the sky opened, so we grabbed our cameras and headed inside.

As the lightning flashed in the pictures windows, we reviewed our captures on our LCDs and shared our bounty with each other. Everyone had multiple lightning captures, and it seemed like virtually all in the group had some version of this bolt striking Oza Butte, about one mile away. It was interesting to compare the differences between each person’s capture—not only did they vary with the composition, they also varied with the exposure time (more or fewer strokes and filaments) and camera type (some cameras trigger their shutters faster than others).

This image is a perfect example of what I love about still photography: It freezes an instant in time that is already memory by the time my brain registers it, allowing me to spend as much time as I want scrutinizing detail I’d never see otherwise. I can’t tell you how long I’ve studied this image already, and I’m still find new things.

Join me in a Grand Canyon photo workshop 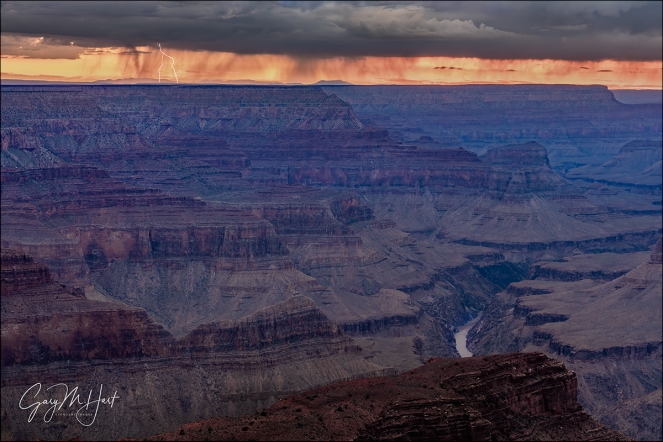 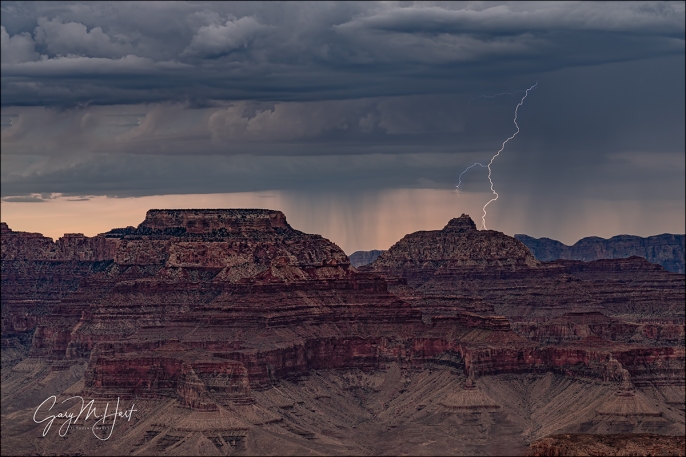 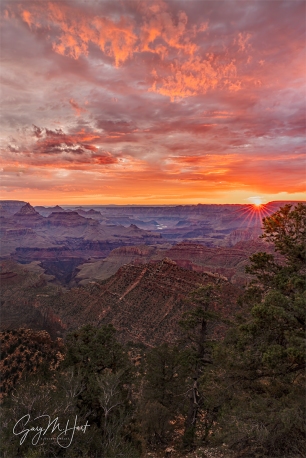 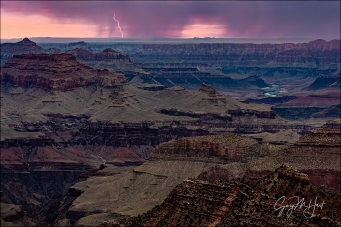 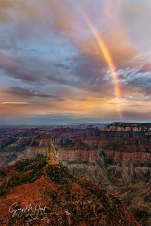 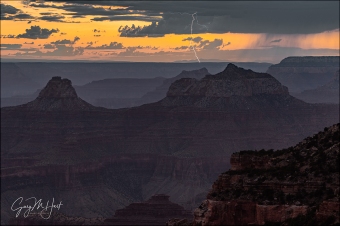 ← Alone on the Rim
One Fine Morning →