Turning a Negative Into a Positive in Yosemite

Since posting this image yesterday, I’ve gotten a few comments ranging from “Magnificent!” to “What is it?”. If you think it’s magnificent, thanks. For those scratching their head (I understand), it’s a reflection of El Capitan in the Merced River. This sheltered pool was covered with pine needles, with a collection of colorful leaves resting atop the floating pine needles. One problem with sharing this online is that it’s a 61 megapixel capture using my Sony a7RIV; with so much detail, it really needs to be seen on a screen bigger than your cell phone’s, the bigger the better. But of course I can only post so big online (in this case, 1200×800 pixels), and even that relatively low resolution is compromised by website (WordPress, Facebook, Instagram, and so on) compression, so I doubt that even on a computer screen you’ll see the detail as clearly as I can. And I realize in this day of eye-grabbing computer art, images like this don’t go viral, but this kind of photography makes me happy.

When I was a kid, I loved power outages. As an adult…, uh, not so much. And if you’ve been living under a rock, you may not have heard about the wildfires charring California’s hillsides and soiling our skies, and PG&E’s dubious strategy to mitigate decades of mismanagement by simply shutting off the power to millions of customers on days the fire risk is deemed extreme. I’m fortunate to live Sacramento, which doesn’t get its electricity from PG&E, which means these outages haven’t really been my problem. Until last week.

When I schedule a photo workshop, I do my best to time it for ideal photography conditions, but sadly, some things are beyond my control. In the 15 or so years I’ve been doing this, I’ve had workshops impacted by rain, snow, wind, fog, wildfires, rock slides, and a tropical storm. I can now add power outage to that list.

Last week’s Yosemite Fall Color workshop coincided with the latest round of wind-induced PG&E power outages. We started Monday, and I learned on Sunday that the power had been shut down in Yosemite and the surrounding area, with no estimate for its reactivation. I e-mailed the group an update Sunday evening, reassuring them that our hotel was open even without power, and that the workshop would go on, power or not. There was still no power in Yosemite when I left home early Monday morning, so all I could do was drive and hope for the best.

With no power at workshop start time, I jettisoned my normal orientation presentation and just winged the group introductions and preparation info in the semi-darkness of the hotel’s lounge area. With only one exception, the group’s attitude was wonderfully positive and up for a we’re-all-in-this-together experience (the exception bailed for home in the first ten minutes, which was probably for the best).

One thing you’re quickly reminded of in a hotel without power is that it’s not just darkness you’re dealing with—we also had no heat, no hot water, and no juice to recharge cameras, computers, and cell phones (and no WiFi!). Between flashlights, headlamps, and battery-powered lanterns, most everyone came armed with enough light to navigate their room in the dark. For emergency battery charging, I brought a couple of fully charged power bricks, and Curt, the photographer assisting me with this workshop, came with an industrial strength portable charger that could have illuminated Vegas for a week. The rooms didn’t seem to get too cold until close to bedtime, but extra blankets in every room fixed that. The biggest problem was the no hot water thing—on the first morning I managed to make myself sufficiently presentable with a sponge bath (applied with prayer for power and hot water by the time the next morning rolled around).

Meeting the group before sunrise Tuesday morning I braced for a mutiny, but everyone remained spectacularly upbeat. And because there was little reason to hang in the rooms without light or heat, I ended up replacing some of my standard mid-day break and training time with extra shooting. Even without power, Curt was able to do his sensor cleaning talk, and clean everyone’s sensor, which was a big hit. And with extra time for shooting, I decided to make the 75-minute one-way drive to Olmsted Point (where I haven’t taken a Yosemite group in years), for a sunset and Milky Way shoot.

Much to our delight, we returned from Olmsted Point on Tuesday night to find the hotel lit up like Christmas—lights, heat, and hot water, but alas, no internet for the rest of the week. We had survived about 30 hours without power (from the time the workshop started until our return from the Milky Way shoot) in remarkably good spirits, and in fact I think the whole experience drew the group even closer. The workshop’s final two days went off without a hitch, and by the end, people who were complete strangers at the start were making plans for post-workshop meals and more photography.

The lesson here, one that we already know but sometimes need to be reminded, is that our experience of the world is shaped more by our attitude than the world. We were in Yosemite for heaven’s sake, in one of the most beautiful times to be there, sharing the experience with a group of like-minded individuals. Doing 12-18 workshops a year for nearly 15 years, memories of the individual workshops tend to run together, but this is one I’ll definitely never forget!

Landscape photographers love clouds, both for the drama they add to the sky and for the way they soften harsh light. So besides the power thing, the other difficulty this workshop faced was no clouds. For four days: Not. One. Cloud. Fortunately, I’ve been photographing Yosemite long enough to know how to make it work without clouds, and the fall color was pretty great—not just on the trees, but also on the ground and in the water.

It also didn’t hurt that the reflections in the Merced River were off the charts (as they pretty much always are in autumn). Virtually every stop offered some reflection of Half Dome or El Capitan in the Merced. And we didn’t have to look to hard to find color to add to the reflections. Frequently it was in the trees lining the far riverbank, but I set my own sights on the yellow and red leaves floating on the near riverbank. With a little careful positioning, I was usually able to juxtapose the floating leaves with the reflection du jour.

A Gallery of Reflections 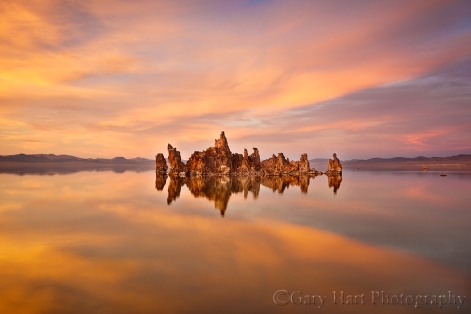 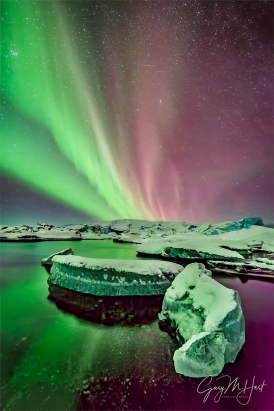 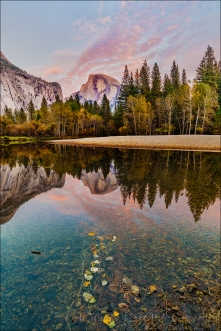 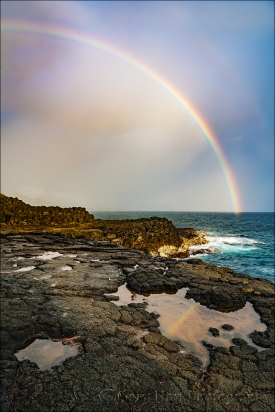 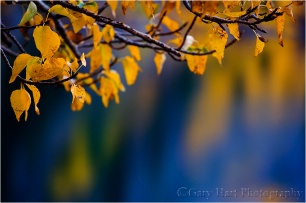 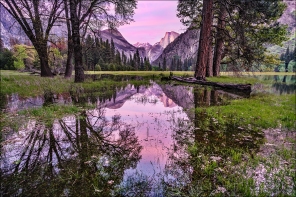 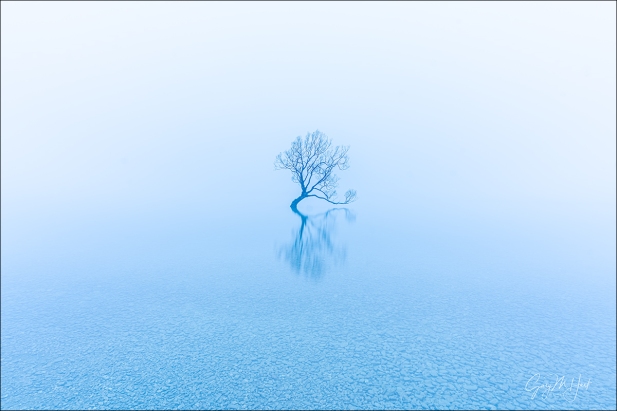 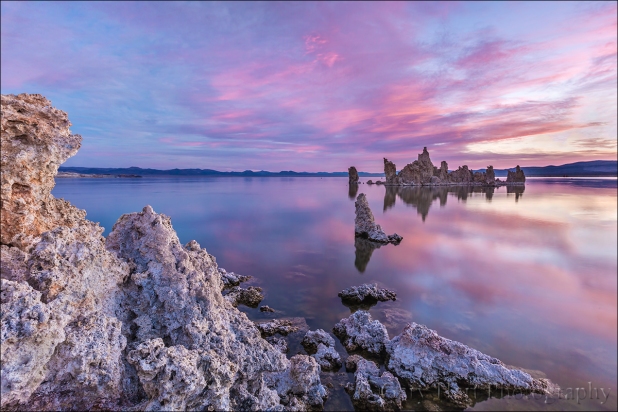 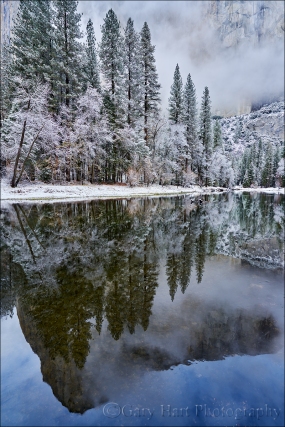 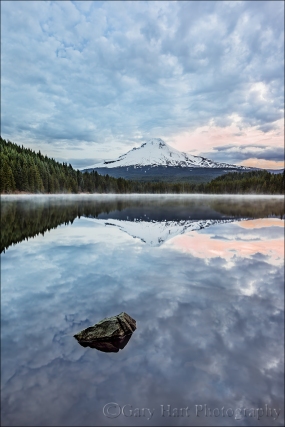 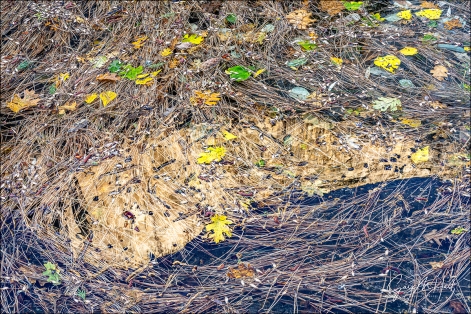 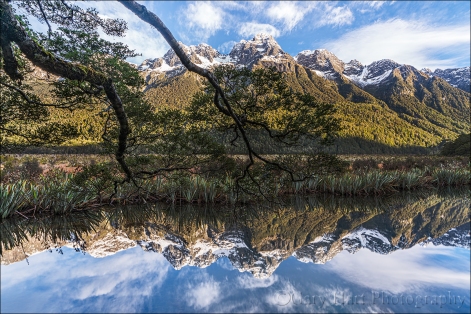 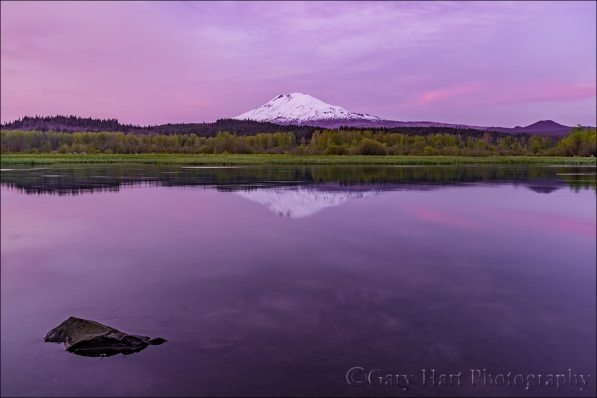 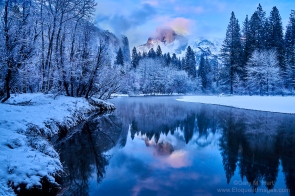 4 Comments on “Turning a Negative Into a Positive in Yosemite”