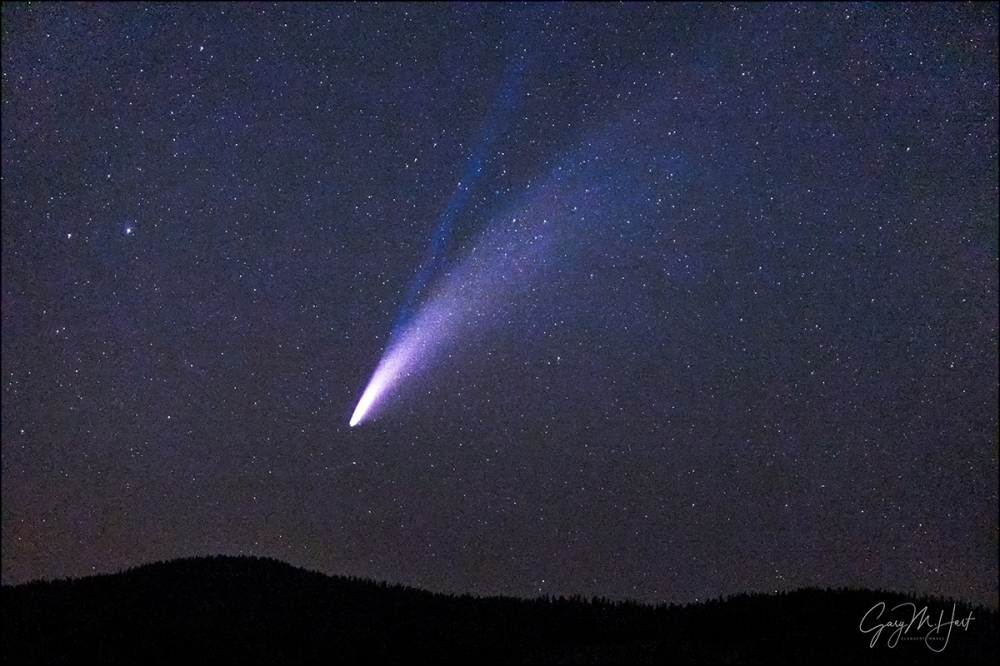 Comets were once harbingers of doom, so it’s likely that in times past the appearance of a bright comet coincident with a worldwide pandemic would have stoked great fear. Instead, (thanks to knowledge gained through centuries of scientific discovery) Comet NEOWISE infused a kernel of joy into an otherwise bleak year.

Spurred by the first NEOWISE anniversary earlier this month, over the previous week or two I revisited the images from last July’s four NEOWISE shoots (two in Yosemite, two at Grand Canyon) to see if I’d overlooked anything. It was great to mentally revisit those nights, which were each in their own way among the most memorable night sky experiences of my life:

On my search I found many process-worthy images, but most were fairly similar to what I already had. One exception is the image I share here. Rather than casting the magnificent comet in a costarring role with landscape and/or celestial icons (Half Dome, El Capitan, Grand Canyon, Big Dipper, Venus), NEOWISE is the one and only star of this image. And more than my other NEOWISE images, what sets this one apart is the spectacular ion tail.

Of my four NEOWISE shoots, the comet was probably at its most striking for my two in Yosemite—each for a different reason. My first NEOWISE experience came during a pre-sunrise visit to Glacier Point that coincided with the comet’s peak visibility.

While it had brightened to somewhere between magnitude 0 and 1 (the lower the magnitude, the brighter) shortly after its July 3 perihelion (closest approach to the sun), NEOWISE was too close to the sun to stand out in the against the brightening sky. But by the time of my Yosemite trip on July 10, NEOWISE had climbed out of the sun’s glow, while still shining in the magnitude 1 to 2 range—somewhere between the brightness of Spica and Polaris—making it easily the most prominent object in that part of the sky.

Six days later I returned to Yosemite, this time taking the one mile hike out to Taft Point to photograph NEOWISE above El Capitan after sunset. When the sky darkened, NEOWISE was clearly visible to the naked eye, but noticeably dimmer. But what made this night’s show special was the development of a spectacular ion tail. Faintly visible to the unaided eye, this new addition was a thing of beauty in my viewfinder and images.

I’m going to digress briefly to mention an important aspect of my photography that I’m not sure everyone shares. In the simplest possible terms, I can’t imagine photographing subjects—celestial, terrestrial, atmospheric—that I don’t understand. Rather than a personal “rule,” this need to understand my subjects is so ingrained in my personality that I didn’t fully appreciate its significance until recently.

My proclivity manifests in many ways, from obsessively buying geology books on every new location, to pouring over scientific articles explaining an obscure cloud formation, to mentally running orbital geometry in my head as I go to sleep (really). And sometimes understanding is the catalyst, inspiring me to pursue with my camera subjects that have fascinated me for years: lightning, solar eclipse, the aurora. (Still dreaming about that first tornado.)

My own internal connection between visual beauty and the natural phenomena that beauty represents probably explains why my blog is such an integral part of my photography. While I can capture nature’s visual gifts with my camera, I need my blog to connect it to the underlying processes. Another, no less important, component of blogging about my subjects is that researching and writing it often becomes as much of a learning experience for me as it is for my readers. (So thank you.)

If you follow me at all, you know my love of astronomy in general, and of comets in particular. So when I saw NEOWISE’s ion tail, I knew what it was, but wanted to more completely understand things like why a comet’s ion tail is always separated from its brighter dust tail, and why the ion tail appears blue in my images (is this real, a color temperature thing, or maybe some color artifact introduced in-camera?).

At risk of repeating myself, a comet is a lump of dust and ice in an extreme elliptical (it’ll be back) or parabolic (one-and-done) orbit of the sun. Most of the comet’s journey is pretty ordinary, but as it approaches the sun, things start to happen—its speed increases, and the sun’s heat starts melting the ice, freeing gas and dust molecules to form a fuzzy coma surrounding the frozen nucleus.

As the comet accelerates toward the sun, the temperature continues rising and the rate of liberated molecules increases. The mass and momentum of the comet’s nucleus allows it to continue on its orbital path, but the freed dust molecules, now under the influence of the solar wind, are nudged back, away from the sun: a tail is born.

Over time this dust tail grows and spreads, becoming the signature feature of most comets. Like most of the comet, the dust tail doesn’t create its own light, but rather is illuminated solely reflected sunlight. Varying somewhat with the composition of its molecules, the dust tail will appear yellow-white to our eyes.

But I’ve saved the best for last. Gas molecules shed by the comet’s nucleus, being lighter than dust molecules, are whisked straight back by the solar wind. Instead of fanning out like the dust tail, these gas molecules form a narrow ion tail that points directly away from the sun. Some of these gas molecules are ionized (stripped of an electron). Unlike the dust tail that shines by reflected light, the ion tail shines by fluorescence, taking on a blue color courtesy of the predominant CO (carbon monoxide) ion.

Of course there’s a time for pondering the marvels of nature, and a time for simply basking in its beauty. So as I was photographing this scene, I wasn’t thinking about all the physics and chemistry unfolding before me, I was focused on capturing the product of the underlying processes (the comet) and its relationship with the surrounding landscape. On this night most of my images were variations of NEOWISE with El Capitan and/or the nearby Big Dipper. But I’m glad I took the time to include a few frames that put this magnificent comet itself front-and-center.

Sign-up to receive my Image of the Month e-mail 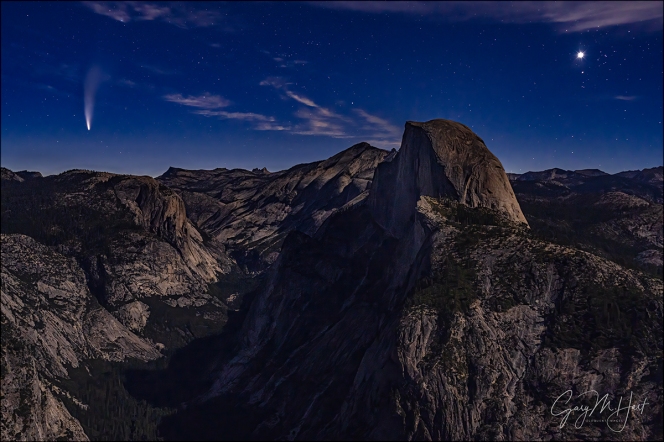 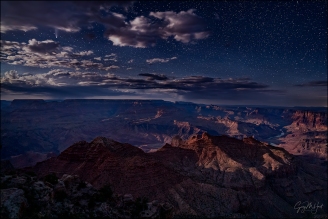 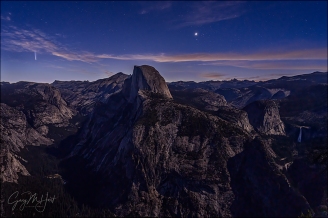 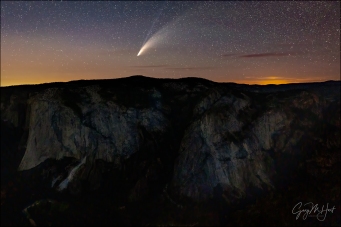 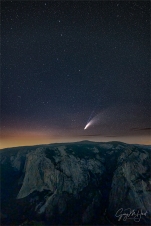 5 Comments on “Ion the Prize”