The other ninety-nine percent

Thomas Edison said, “Genius is one percent inspiration and ninety-nine percent perspiration.” (Without claiming genius) I think this applies to photography as well: Many successful images are more the product of being in the right place at the right time than divine inspiration. Of course anyone can stumble upon a lucky convergence of location and conditions and come home with a great photo, but the “genius” behind creating great photos consistently is preparation and sacrifice–a.k.a., perspiration.

The moonrise on the final sunrise shoot of last week’s Yosemite workshop spurred these thoughts about inspiration and effort. We were all in more or less the same place, photographing the same thing. And while everyone probably captured very similar images (in this case of a crescent moon squeezing between El Capitan and Half Dome), the true magic was simply being there.

But why were we the only ones there to witness this special moment that probably won’t repeat for decades? Determining the moon’s altitude and azimuth from any location on Earth is as easy as visiting one of many websites, or using one of many astronomical software applications such as The Photographer’s Ephemeris or (my preference) the Focalware iPhone app. Armed with this data, aligning the moon’s rise with any landmark isn’t rocket science.

Based on my calculations and plotting, I scheduled my “Yosemite Dogwood and Rising Crescent” workshop to coincide with a sunrise crescent moon. The dogwood bloom isn’t as reliable, but I know interesting weather is still possible in Yosemite in late April and early May. What we ended up with was mostly clear skies (great for tourists, but definitely not for photographers) and a very late dogwood bloom in Yosemite (probably two weeks behind “schedule”), forcing me to shift the daytime emphasis of my spring workshop to rainbows. I’m happy to report Bridalveil and  Yosemite Falls delivered more photogenic rainbows than I can count, from a number of different locations.

As spectacular as they were, overshadowing the rainbows was the moonrise on our penultimate morning. I promised the group that departing at 4:50a.m. would get us to Tunnel View in time to photograph a 7% crescent moon rise above Yosemite Valley, between Sentinel Dome and Cathedral Rocks, in the pre-dawn twilight. (I knew this because I’ve been calculating moonrise and moonsets in Yosemite and elsewhere for many years, and have photographed more of these from Tunnel View than any other location.) That moonrise came off exactly as advertised–so far so good.

But the Tunnel View success, as beautiful as our images were, was merely a warm-up that gave everyone an opportunity to hone their silhouette exposure and composition skills in advance of the rare moonrise opportunity I’d planned for the next morning. When scheduling this workshop I’d determined that about 45 minutes before sunrise on May 1 of this year (2011), a delicate 3% crescent moon would slip into the narrow gap between El Capitan and Half Dome for anyone watching from Half Dome View on Big Oak Flat Road.

Lunar tables assume a flat horizon, so unless I’m at the ocean, the primary uncertainty is when the moon will appear above (or disappear below) the not-flat horizon. Once I’ve photographed a moonrise (or set) from a location, I simply check the precise time of its appearance (or disappearance) against the altitude/azimuth data for that day to get the exact angle of the horizon from there. Until I have this horizon information, I only have the moon’s direction and elevation above the unobstructed horizon and can only make an educated guess as to the time and location of its appearance.

The other big wildcard in moon and moonlight photography is the weather, but a last minute check with the National Weather Service confirmed that all systems were go there. Nevertheless, despite all my obsessive plotting, checking, and double-checking, having never photographed a moonrise from this location, and the fact that an error would affect not just me but my entire group, I couldn’t help feel more than a little anxious.

The afternoon before our second and final pre-dawn moonrise, I brought the group to Half Dome View so they could familiarize themselves with the location and plan their compositions. Due to the horizon uncertainties I just described, the first time I photograph a moonrise/set from a location, I generally give my group only an approximate time and position for the moon’s rise/set. But during this preview someone asked exactly where the moon would rise, and I confidently blurted that it will appear in the small notch separating El Capitan and Half Dome between 5:15 and 5:20 a.m. (about 25 minutes after the official, flat-horizon moonrise). Standing there that afternoon, however, I realized how small the notch really is, meaning that even the slightest error in my plotting could find the moon rising much later, from behind El Capitan or Half Dome. So I quickly qualified my prediction, explaining that I’ve never photographed a moonrise here and the uncertainty of knowing the horizon. But given all of my perfectly timed waterfall rainbow hits so far, not to mention our Tunnel View moonrise success earlier that morning, I had the sense that my group had unconditional (blind) confidence in me. (Yikes.)

Sunday morning we departed dark and early (4:45 a.m.), full of anticipation. We arrived at Half Dome View a little after 5:00, early enough to enable everyone to set up their tripods, frame their compositions, and set their exposures. Then we waited, all eyes locked on the gap separating El Capitan and Half Dome. Well, almost all eyes–mine made frequent detours to my watch and the Focalware iPhone app responsible for my bold (rash?) prediction. (What was I thinking, promising a moonrise into a paper-thin space in a five minute span from a spot where I’d never photographed a moonrise?) My watch crawled toward the 5:15-5:20 window: 5:15 (Is the notch shrinking?); 5:16 (It’s shrinking–I swear I just saw Half Dome inch closer to El Capitan); 5:17 (I entered the coordinates wrong, I know I did–what if it comes up behind us?). Surely this wasn’t the kind of perspiration Edison was thinking about.

As I frantically re-checked my iPhone for the umpteenth time, somebody exclaimed, “There it is!” I looked up and sure enough, there was the leading sliver of nearly new moon perfectly threading that small space between El Capitan and Half Dome. Phew. The rest of the morning was a blur of shutter clicks and exclamations of delight (plus one barely audible sigh of relief). (How could I have even dreamed of doubting the tried and true methods that had never failed me before?) 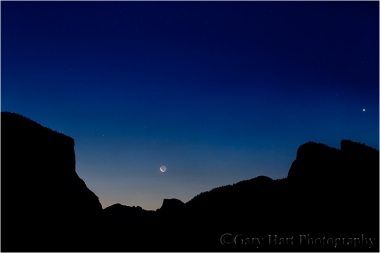 ← My camera can beat up your camera (and other photography myths)
Shoot now, think later →

18 Comments on “The other ninety-nine percent”