Yosemite in a Raindrop 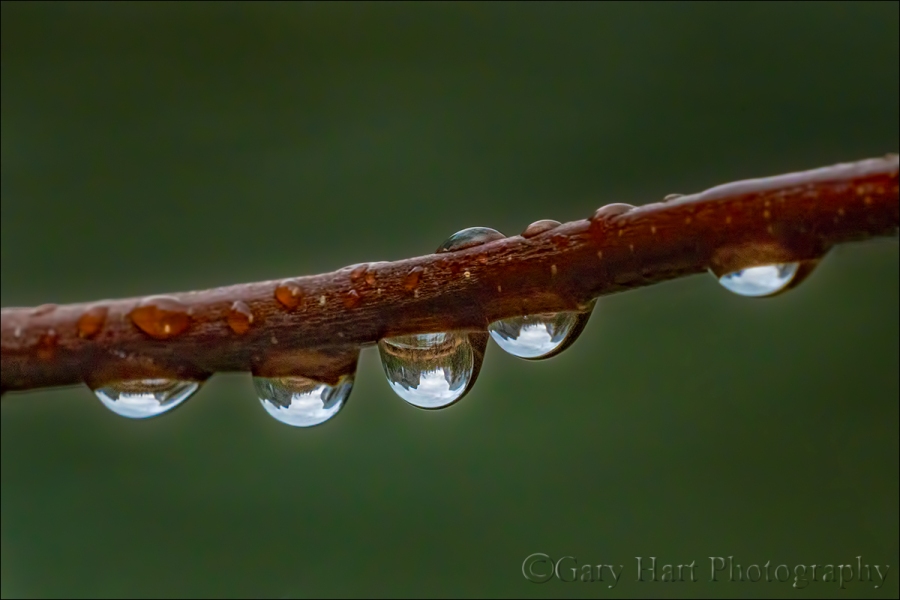 I’ve been to Valley View in Yosemite about a million times. For those not familiar with Yosemite Valley, Valley View (sometimes called Gates of the Valley) is the classic view of El Capitan, Cathedral Rocks, and Bridalveil Fall, with the Merced River in the foreground, that represents Yosemite in countless calendars, postcards, and advertisements. Though all this attention is justified, after a million visits and counting (okay, so maybe I’m exaggerating just a little), you’d think it would be easy to take Valley View’s beauty for granted. But I don’t get tired of visiting here, not ever. 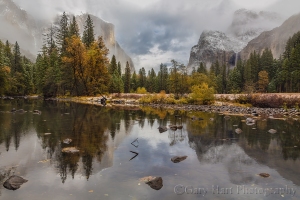 Like most spots in Yosemite, the scene at Valley View varies greatly with the season and weather. In spring, Bridalveil Fall explodes from beneath Cathedral Rocks, and the surrounding forest is dotted with blooming dogwood. In autumn, rocks dot the Merced River, and colorful leaves mingle with glassy reflections. And on still winter mornings, a low mist hugs Bridalveil Meadow just across the river, while churning clouds surrounding El Capitan after a storm are a sight to behold. Nevertheless, I’m often content to keep my camera in the bag and just privately appreciate Valley View’s majesty.

But I’m a photographer, and sometimes it’s hard to experience this beauty passively. On those visits when I’m moved to photograph Valley View, I challenge myself to find something that hasn’t been done a million times. The final morning of last week’s Yosemite Moonbow and Wildflowers photo workshop was gray and damp, with occasional sprinkles lingering from a heavier overnight rain. We’d been here earlier in the workshop (in different conditions), and I hadn’t planned to photograph this time, but spotting raindrops clinging to the branches of the shrubs that line the river, I recognized a unique opportunity.

If you know optics, you know that a convex shape bends outward (so water striking its surface would run off; water striking a concave surface would pool inside). Due to this curvature, photons passing through a convex lens are diverted toward the center, where they converge and cross to create an inverted image at the point of convergence (focal point).

In fact, the human eye is a convex lens, projecting its inverted image onto the back its sphere, an image your brain promptly reverses. And photographic lenses are a complex arrangement of convex lens elements that ultimately project onto your camera’s sensor an upside-down image that’s flipped for display by the camera’s firmware.

Compared to these two examples, a dangling raindrop is elegant simplicity. Bound by surface tension, water molecules naturally form a spherical shape that is flattened or stretched slightly by gravity. Because water molecules form an electrostatic bond with foreign surfaces as well, they also adhere to things like leaves and branches, sometimes appearing to defy gravity. This small gift from nature turns a raindrop into a natural convex lens. Courtesy of this natural lens, those who peer closely into a water drop will see an inverted microcosm of the surrounding world, a view that changes with the viewing angle.

There’s potential beauty inside every water drop, but on this morning at Valley View I was in the fortuitous position to photograph raindrops holding one of the most beautiful scenes on Earth. I found a quintet of raindrops lining a branch that had nothing behind it but river. Tiptoeing close, I aligned myself and the raindrops with the Valley View scene and extended my tripod to branch level. I started with my Sony 90mm on my Sony a7RIII, adding extension tubes to get even closer. After working with this combination for a few minutes, I switched to my Sony 100-400 GM (still with extension tubes).

The image you see here is from the 100-400. Depth of field with such a close focus point is paper thin, so I stopped down to f/20 and bumped I my ISO to 3200 to ensure a shutter speed fast enough to minimize the risk of motion blur. To focus, I magnified the raindrop scene in my mirrorless viewfinder. Exposing to avoid blowing out the bright highlights in the (inverted) sky also darkened the river, creating the ideal background.

The Many Views of Valley View 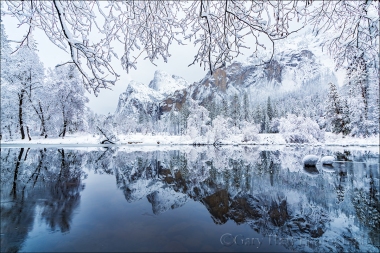 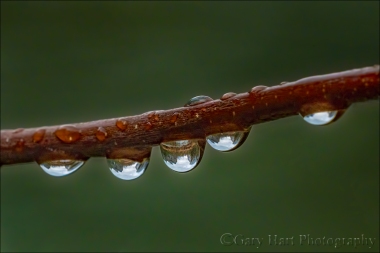 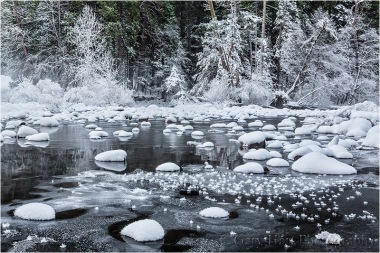 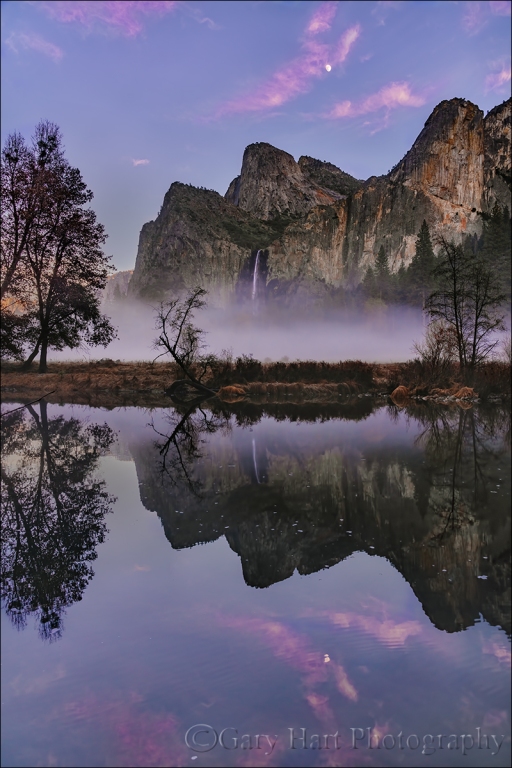 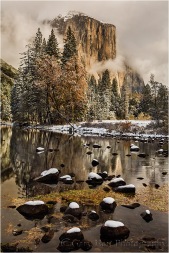 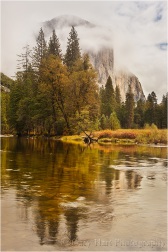 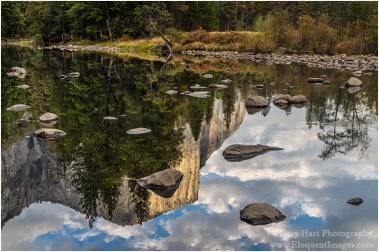 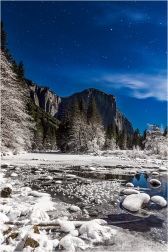 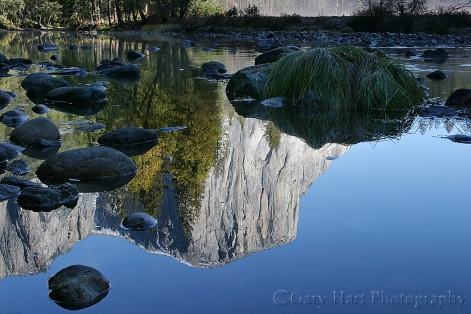 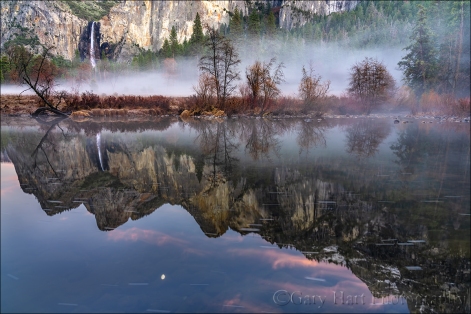 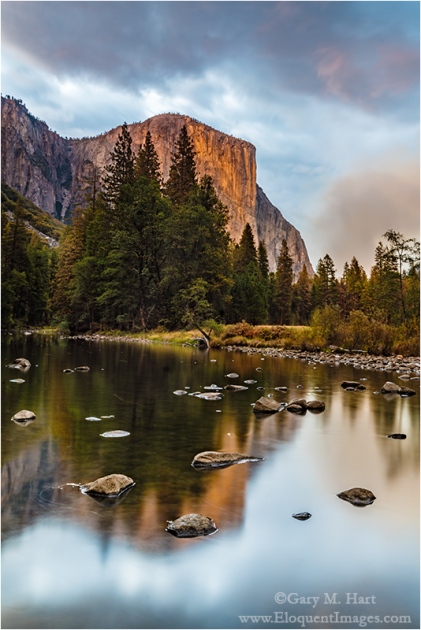 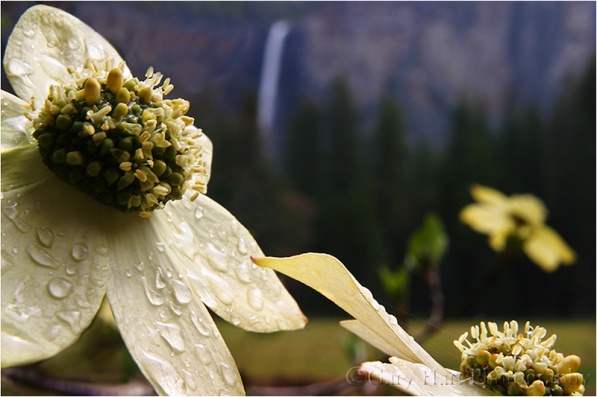 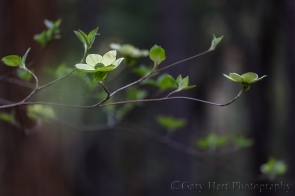 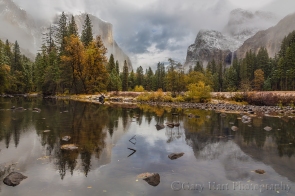 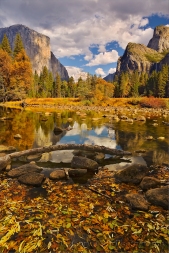 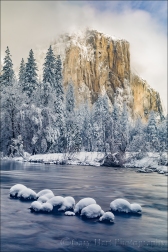 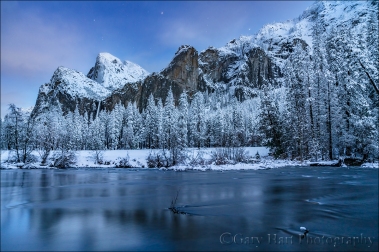 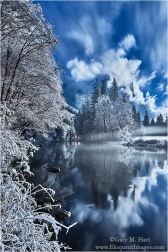 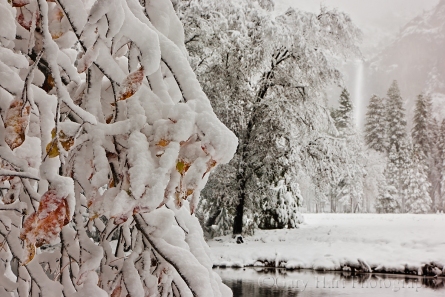 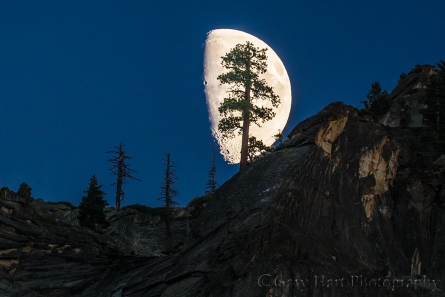 3 Comments on “Yosemite in a Raindrop”