Last Monday seemed like the perfect day for a poppy shoot in the foothills. I had the afternoon wide open—with the California media buzzing about this year’s “superbloom,” plus a forecast promising ideal conditions (calm wind and thin clouds), I couldn’t help dreaming about my own images of poppy-saturated fields. What could possibly go wrong?

Getting on the road proved a little more problematic than anticipated, but by 2 p.m. I was on my way, encouraged forward by an occasional poppy beside the freeway. Adding to my optimism, the aforementioned clouds were just right: thick enough to diffuse the sunlight, but not so dark that they’d close the sun-loving poppies. I exited the freeway as soon as possible, opting to drive the 2-lane roads that follow the hills’ natural contours. While my preferred my route isn’t the most direct, it is the most scenic, winding me through oak-studded hills deeply greened by this year’s copious winter rain. Though this drive takes a little more than an hour, the time passes quickly with so much pastoral beauty filling my windshield.

I knew the poppies in Northern California were starting late due to our relatively late winter, but was fairly confident I’d allowed enough time for the golden hillsides to kick in. In a good spring, poppies dot the entire route, but by the time I was southbound on scenic Highway 49, I started realizing I hadn’t seen any poppies since leaving Sacramento. Soon I was pretty resigned to the fact that this year’s superbloom was limited Southern California, and wondered if I’d find any poppies at all. Then it started to rain. 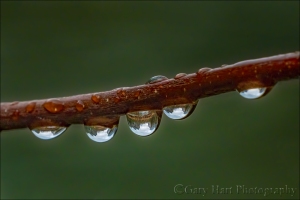 As easy as it would have been easy to cut my losses and turn around, I simply changed my expectations. With fresh memories of a brief but rewarding raindrop experience in Yosemite, I realized I didn’t need to find entire hillsides covered with poppies, that even a single poppy could be nice. So, rather than zipping along Highway 49 at 50 MPH (-ish) looking for golden slopes, I started exploring some of the quieter tributary roads and quickly realized that there were a sprinkling of poppies out.

I ended up spending two hours photographing a small patch of poppies I found on a dead-end road near Jackson. It rained the entire time, but with rain gear in my car for just these situations, I stayed warm and dry. My camera? Not so much. I tried working with an umbrella, but after a few minutes realized I was one arm short and just decided to test the water resistance of my Sony a7RIII. I’m happy to say that it passed with flying colors, as did the Sony 100-400 GM.

In the two weeks since I shot those raindrops in Yosemite, I’ve been plotting how to get even closer. On the Yosemite shoot I added extension tubes to my 100-400; this afternoon I returned to the extension tubes, but added my 2X teleconverter (which, I might add, handled the rain perfectly as well). I thought I’d try a few lens/extension-tube/teleconverter configurations, but I was having so much fun that I ended up shooting this way the entire time.

On a rainy day, light is already limited. But adding a teleconverter and extension tubes compounds the light problem. Because f/stop is a ratio with focal length as the numerator and lens opening as the denominator, adding a teleconverter and extension increases the focal length, resulting in less light reaching the sensor. A 2x teleconverter cuts two stops of light, which means my 100-400 that’s normally wide upon f/5.6 at 400mm becomes f/11 at (the teleconverted) 800mm (400mm x 2). And adding extension tubes also extends the lens’s effective focal length, further reducing the light reaching the sensor. To compensate for all this missing light, I shot everything this afternoon at either ISO 1600 or ISO 3200.

One of the cool things about this kind of photography is how different the world looks through the viewfinder. I love putting my eye to the viewfinder, moving the lens around, and changing focus slowly to see what snaps into view. In this case I was looking for a poppy to isolate from its nearby surroundings, but that also has something nearby (usually another flower) that I could soften enough to complement without competing. Sometimes I had a general idea of a subject before looking through my camera, other times I’d just explore with my lens until something stopped me.

Because depth of field shrinks not only with focal length, but also with focus distance, every frame I clicked this afternoon had a paper-thin range of sharpness. With such a shallow depth of field, none of these images would have been possible without a tripod. With my composition set, I’d pick a focus point (usually, but not always, a prominent raindrop), focus in my viewfinder until I was “certain” it was sharp, then instantly debunk my that “certainty” by magnifying the image in my viewfinder. This little exercise quickly taught me that with such a small margin for error, the best I could reliably achieve without magnifying the view was almost sharp enough, making pre-click magnification an essential part of my focus workflow (instead of just a cursory focus-check).

Each time I do this kind of photography I learn something. In this case it was how far away I could be and still fill my frame with a poppy. All of the images I captured this afternoon were from four to six feet away.

I wrapped up when the sky darkened further and the rain started coming down pretty hard. I couldn’t believe I’d been out there two hours, and spent most of the drive strategizing new ideas for the next time.

Getting the Drop on Nature 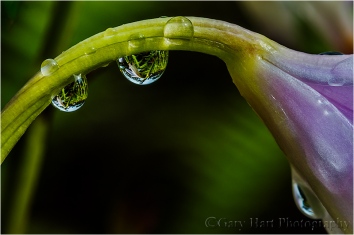 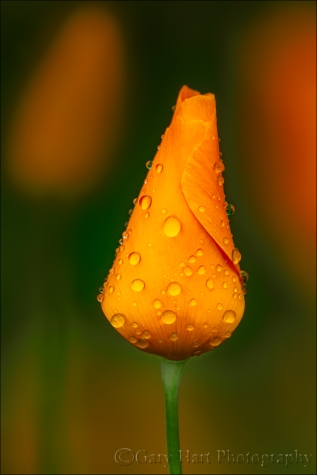 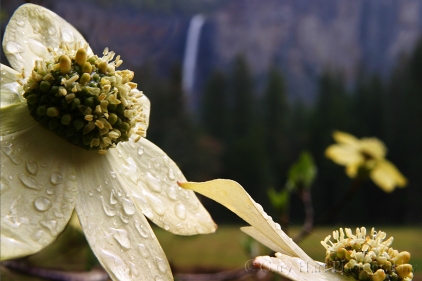 ← Macro in Spirit
The Shocking Truth About Lightning →