I sometimes hear comments and questions that make me think people believe pro photographers have “secrets” that enable us to photograph things the amateur public can’t. Let me assure you that this is not true. What is true is that successful landscape photographers have an understanding of the natural world that helps us know where and when to look for our images, and we know that often the best pictures aren’t in the same place as the best view.

For example, it’s hard to deny the beauty of a sunrise or sunset. But it seems that most people are so mesmerized by the scene facing the sun that they miss exquisite beauty in the other direction. The next time you find yourself out photographing (or simply enjoying) a sunrise or sunset, do yourself a favor and check out the world behind you. Beneath clear skies you’ll see the earth’s shadow, often called the “twilight wedge,” overlaid by the pink “Belt of Venus.” I call the sky in this direction the “twilight edge,” not only because it’s found at the day’s leading or trailing edge, but also for the advantage it gives photographers who understand how easy this under-appreciated (and oft missed) perspective is to photograph.

Unlike the view toward the rising or setting sun, where cameras struggle to expose the full range of shaded subjects against a bright sky, the scene opposite the sun is bathed light that has been bent, scattered, colored, and subdued by its long trip through the atmosphere. While not as dramatic to the eye as an electric crimson sky or throbbing orange sun, a camera loves the long shadows and warm tones away from the sun.

But the great light doesn’t begin at sunrise, or end at sunset. When the sun is about ten degrees or closer to the horizon, the sky in the opposite direction is bright enough to fill the landscape with soft, shadowless light that makes photography a breeze. And while the scene may appear quite dark to the eye, a long exposure and/or slightly higher ISO (like 400 or 800) will reveal the world in a way that’s impossible in daylight. Case in point:

Before Sunrise, Mt. Whitney and the Alabama Hills, California
This is a 30 second exposure at ISO 400, captured about 30 minutes before sunrise on a windy Eastern Sierra winter morning, when the world was still dark enough to require a flashlight to maneuver.

Above the shadowless pre-sunrise/post-sunset landscape, when the sun is around six degrees or closer to the horizon (civil twilight), soft bands of color stacked like pastel pillows materialize. The blue-gray band earth’s shadow directly above the horizon earned its “twilight wedge” designation because you can sometimes see the earth’s curve in the shadow, giving it something of a wedge shape. At sunset, the gradual upward motion of the shadow gives the appearance of a wedge being driven into the darkening sky.

Above the earth’s shadow, but not quite high enough to receive the full complement of solar wavelengths, the atmosphere basks in the slightly brighter pink glow of scattered sunlight. In this region the shorter wavelengths have been dispersed, leaving only the longest, red wavelengths—the Belt of Venus. You’ll first see its pink stripe high in the pre-sunrise sky, descending and brightening as the sun rises, until the pink is finally overcome by the first rays of sunrise; after sunset the pink band starts low, climbing skyward and darkening, eventually blending into the oncoming night.

A particularly striking sunrise/sunset phenomenon is the “alpenglow” that spreads atop mountaintops that rise so far above the surrounding terrain that they jut into the BoV, assuming its pink glow. My favorite place to photograph alpenglow is the Alabama Hills, 10,000 vertical feet below Mt. Whitney and the Sierra crest, but alpenglow paints peaks throughout the world. 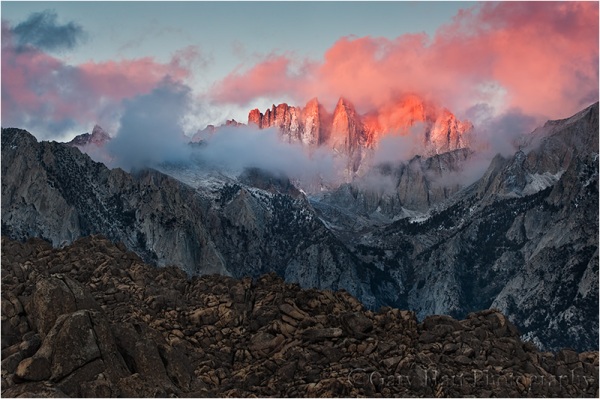 Alpenglow, Mt. Whitney and the Alabama Hills, Eastern Sierra
From my vantage point the sun was still well below the horizon, but Mt. Whitney, 10,000 feet above me jutted into the scattered pink rays of the rising sun.

Quite conveniently, the earth shadow and Belt of Venus also happen to be where you’ll find a setting (at sunrise) and rising (at sunset) full moon. If you’ve been paying attention, you know that the full moon (more or less) rises in the east at sunset, and sets in the west at sunrise. Many of my favorite images use just such a moonrise or moonset to accent an empty but colorful sky.

The image at the top of this post is a recent attempt at a sunrise moonset. I was in Big Sur last week to help my good friend Don Smith with his Big Sur winter workshop. Don and I guided the group down to the beach much too early to photograph the moon, but the extra time allowed everyone to search for a suitable foreground.

With the tide quite high, many of the beach’s most photogenic rocks were partially or completely submerged, but we certainly weren’t lacking for subjects. Don helped half of the group work the rocks along the south part of the beach, while the other half followed me north. Just a couple of hundred yards up the beach we found a pair of boulders amidst the crashing surf. Taking care not to scar the pristine sand with footprints, we spent the rest of the sunrise moving around, framing the setting moon with these and a couple of other nearby boulders.

I clicked the frame here extremely early in the window of usable light, when the foreground was just bright enough that capturing usable detail didn’t require overexposing the moon (remember, if I can’t capture the entire scene with one click, I won’t shoot it). Vanquishing this extreme dynamic range was aided by the amazing sensor of my new Sony a7R (thank you very much), combined with my trusty Singh-Ray 3-stop hard graduated neutral density filter.

Even with those advantages, I still needed to massage the shadows up and highlights (the moon only) down in Lightroom and Photoshop. The advantage of photographing the scene this early was the ability to capture the moonlight reflected on the ocean, something I’d have lost if I’d waited for the foreground to brighten.

A Gallery of the View Opposite the Sun 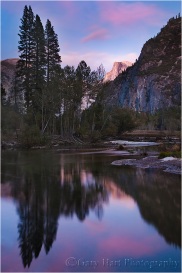 Learn more and photograph these scenes yourself in a photo workshop