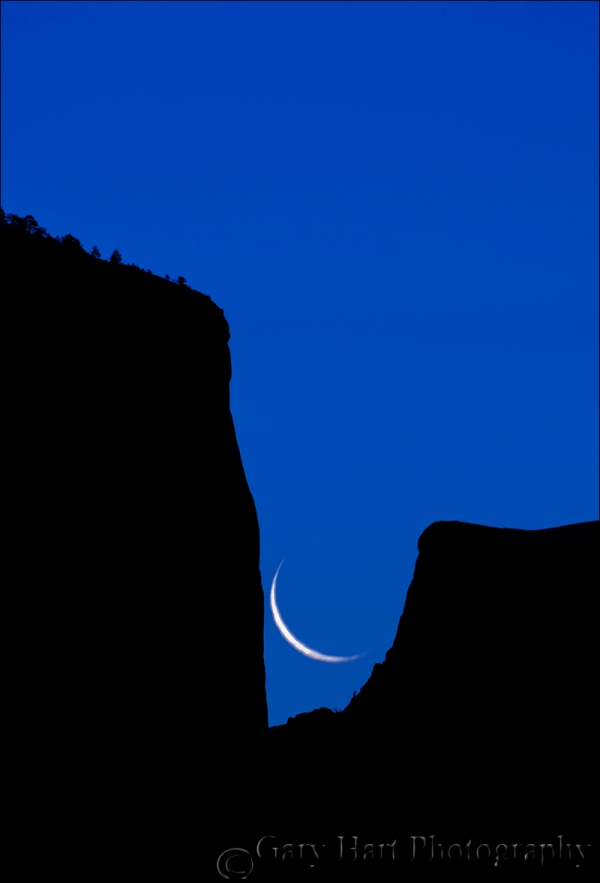 Nothing draws the eye quite like a large moon, bright and bold, with a striking foreground. But something happens when you try to photograph the moon—somehow a moon that looks to the eye like you could reach out and pluck it from the sky, shrinks to a small white speck in a photo.

Crescent or full, the moon will be as big as the focal length you choose—photograph it at 16mm and the moon registers as a tiny dot; photograph it at 600mm and your moon dominates the frame.

But a landscape image with a large moon requires more than just a long focal length. If big was all that mattered, you could attach your camera to a telescope, point skyward, and get a huge moon. But without a landscape to go with your huge moon, no one would know whether you took the picture standing on a beach in Hawaii, atop a glacier in New Zealand, or beside the garbage cans in your driveway.

“Big moon” is a subjective label, but I usually won’t use it unless I can photograph the moon at 200mm or longer. And while a 200mm lens is okay, the moon doesn’t really start to jump out of the frame for me until I approach 400mm.

My go-to big moon lens is my Sony 100-400 GM because it provides good magnification along with focal length wiggle-room for pulling back when I need to fit a foreground subject that’s a little too close. A telephoto zoom also provides focal length flexibility that allows you to balance your composition, or add variety with a series of different compositions. Of course you can always switch lenses mid-shoot, but you don’t fully appreciate how fast the moon is moving in the sky until you try to align it with a terrestrial subject in a telephoto composition.

A little easier for me is including a big moon with smaller foreground objects like a prominent tree. Near my home in Northern California are rolling hills topped by solitary oaks that make perfect moon foregrounds when I can shoot up so they’re against the sky. And since these trees are much smaller than Half Dome, even vantage points that are less than a mile away lets me zoom all the way up to 1200mm.

When I’m not sure of my subject distance, I estimate as best I can, focus on a point beyond my foreground subject, then review my image magnified to check sharpness. If my focus point is in my frame, great, but I won’t hesitate to remove my camera from the tripod to focus on something behind me that’s the right distance (if you do this, to prevent refocusing, be sure you use back-button focus or are in manual focus mode when you click your shutter). It’s always best to get the focus sorted out before the moon arrives, a good reason to arrive at a new location well in advance of the moon’s arrival.

Like the sun, the moon traces a different path across the sky each day. This path changes with each lunar cycle (from full, to new, back to full); whether the moon is full or crescent, a location that perfectly aligns the moon and foreground one month will probably be nowhere close the next.

<Some may recognize this from the horizontal version of this moonrise I’ve shared for years; I just processed this vertical version.>

A few years ago I scheduled a spring Yosemite workshop to coincide with a 3% crescent moon that I’d computed would slip into the narrow gap between El Capitan and Half Dome about 45 minutes before sunrise on our final morning. Though we were all at the same place, photographing the same thing, the true magic was simply being there to witness a special moment that probably won’t repeat for decades.

The afternoon before this moonrise, I brought the group to this spot on Big Oak Flat Road so they could familiarize themselves with the location and plan their compositions. During this preview someone asked exactly where the moon would rise, and I confidently blurted that it will appear in the small notch separating El Capitan and Half Dome, between 5:15 and 5:20 a.m. I’d never actually photographed a moonrise from this spot, and as I spoke to the group I became painfully aware of how small the opening is—even the slightest error in my plotting could find the moon blocked by El Capitan or Half Dome.

Sunday morning we departed dark and early (4:45 a.m.), full of anticipation. We arrived at Half Dome View a little after 5:00, early enough to enable everyone to set up their tripods, frame their compositions, and prepare their exposure settings. Then we waited, all eyes locked on the notch.

And then there it was, the slightest point of moonlight edging into that small gap between Yosemite’s iconic monoliths. Phew. The rest of the morning was a blur of shutter clicks and exclamations of delight. 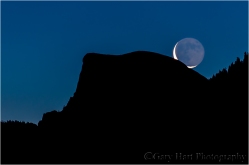 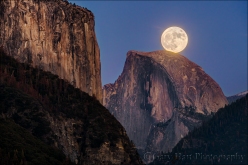 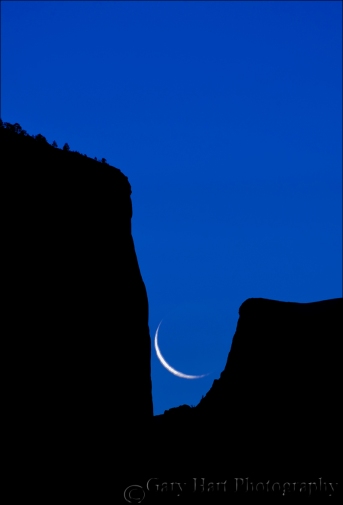 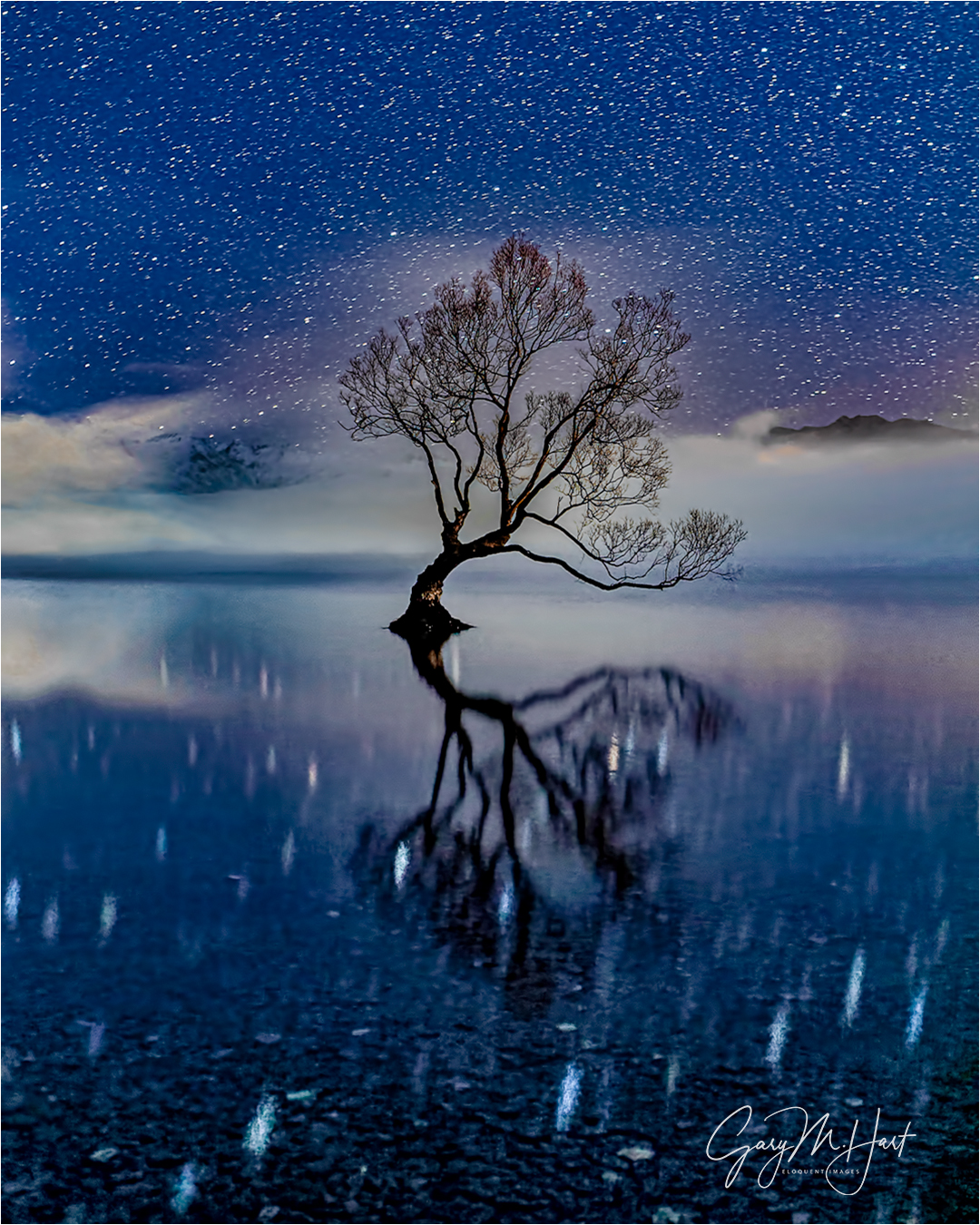