I just wrapped up my Yosemite Fall Color and Reflections photo workshop, my first workshop since February. And as you can see from this image taken on our final morning, this year’s workshop absolutely lived up to its name. We enjoyed lots of fall color, and reflections at virtually every twist and turn of the Merced River. We also got to photograph a nearly full moon rising above Yosemite Valley at sunset, and saw more bears than I’ve seen in years (maybe even since my childhood).

All the great photography more than compensated for COVID-related and other difficulties that tried to mess with our mojo. We started with the threat of a fire-danger-induced PG&E power outage and a missing (essential) computer cable. The power shutoff never manifested (phew), but I have no one to blame but myself for the missing HDMI cable that allows me to connect my computer to a TV or projector, and that always lives in my computer bag, I swear (I’ll use the 8-month hiatus as an excuse). Apparently HDMI technology hasn’t made it to Yosemite yet, but a 90-minute round-trip drive to a hardware store Mariposa set things right and we were off and running. Everyone was onboard with the COVID protocol that included masks for group gatherings, outdoor meetings (which worked surprisingly well once I ditched my not-quite-bright-enough projector and moved the TV outside), and suspension of ride-sharing. The no ride-sharing thing is what concerned me most, but a few people volunteered to partner up (completely optional—anyone who wanted to drive alone, could), and we ended up with “only” six cars in our caravan. By pulling over regularly to reassemble, and proactively coordinating our parking strategy, not a single car got separated or missed a shoot.

One of the workshop’s highlights came on our final morning, when we photographed Half Dome from Sentinel Bridge. Because Half Dome’s face stays shaded until late in the day, Sentinel Bridge is normally a late afternoon to sunset location, but in autumn the first sunlight to reach the valley floor pours down the river to illuminate cottonwoods lining the far riverbank. I’d taken very few pictures during this workshop (I’ve been to Yosemite once or twice before), but when I saw the opportunity to add a sunstar to this already beautiful scene, I raced back to my car and grabbed my tripod, Sony a7RIV, and Sony 24-105.

Sunstars have become ubiquitous to the point of cliché, but they can be cool when done right. And sometimes they create a lemonade-from-lemons opportunity to add visual interest to a blank sky, high-contrast scene that has little else going for it. In this case the backlit trees made the Half Dome reflection scene pretty nice anyway, but I thought the sunstar gave it a little punch that took it to the next level. And getting a second sunstar from the reflection was a bonus.

Sunstars happen when light spreads out as it passes through the intersection of the lens’s aperture blades, with the number of blades determining the number of points in the star effect. The lens opening (a.k.a., the aperture, which we measure in f-stops), that is made larger or smaller to allow more or less light to reach the sensor,  is not a perfect circle that expands and shrinks uniformly. Rather, it’s a circular(-ish), symetrical polygon of overlapping blades that expands or contracts depending on the f-stop setting. While never a perfect circle, the larger the aperture is, the closer to round the opening becomes, and the less the light is spread out by the blades and the less pronounced the sunstar will be. Conversely, the smaller the aperture, the more the blades are closed down, and the more extreme the angles at the intersection of each overlapping blade. Therefore, the general rule for photographing a sunstar is to stop down to a small aperture (high f-stop number). I resist closing all the way down because that can create other problems, like diffraction and soft edges, and find f/16-f/20 to be absolutely fine.

As appealing as a sunstar can be, adding one also creates problems that include lens flare and extreme dynamic range, not to mention a brilliant sunstar can be a distracting eye magnet that risks overpowering the rest of the scene. The good news is, despite the difficulties, creating a sunstar is relatively straightforward, and most of the potential problems can be minimized if you’re careful. Here’s a quick recipe:

Armed with this knowledge, I planted myself in an opening along the Sentinel Bridge rail, dialed my lens to f/20, framed up my composition, and waited for the sun to peek from behind a tree. Sunstars with a mirrorless camera are easy because you can see exactly what you’ll get before clicking—with my eye shifting between the sunstar and my histogram, I started clicking, adjusting my shutter speed by 1/3 to 2/3 of a stop with each click to maximize my options later (more/less light, larger/smaller sunstar). When the sun disappeared behind another tree I stopped shooting, pretty pleased with my initial results. But standing there, waiting for the sun, I realized that when it rose enough for its reflection to bounce off the river, we’d have a chance for a double sunstar—one through the trees, the other off of the reflection. (Technically this isn’t a sunstar reflection because the sunstar happens in the lens, not on the water.)

Since we were all standing in a slightly different spot, the sun appeared and disappeared at a different time for each of us, but I alerted everyone of the double sunstar opportunity so they wouldn’t stop as soon as the sun disappeared behind a tree. While waiting for the sun to return to my position, I enjoyed the reactions as others in the group started having success. I gotta say, as much as I missed my workshop locations during the pandemic “break” (I did!), it’s this group experience that I missed the most. It’s great to be back.

Join me in Yosemite

A Galaxy of Sunstars 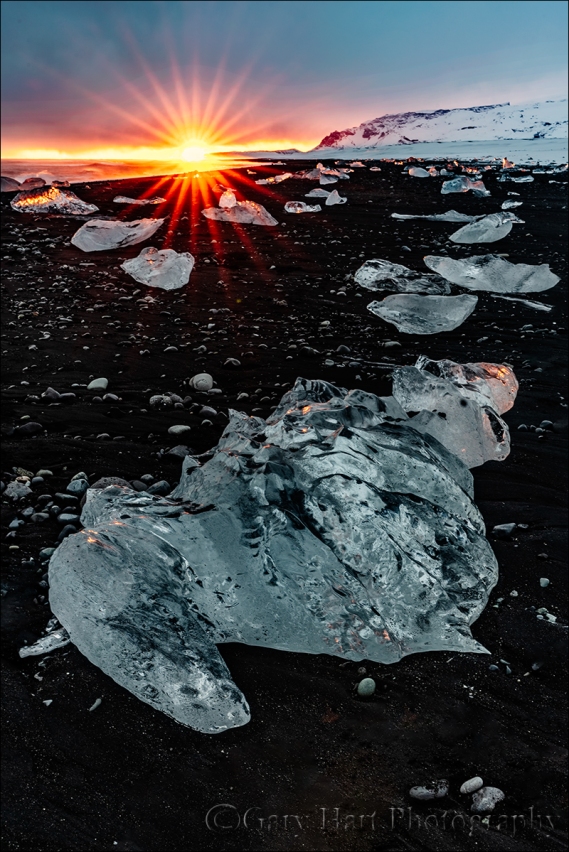 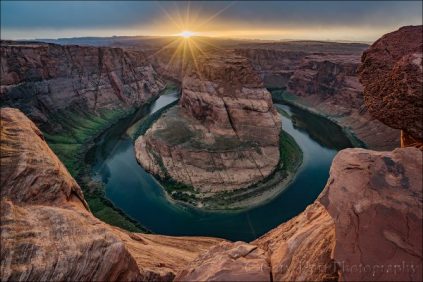 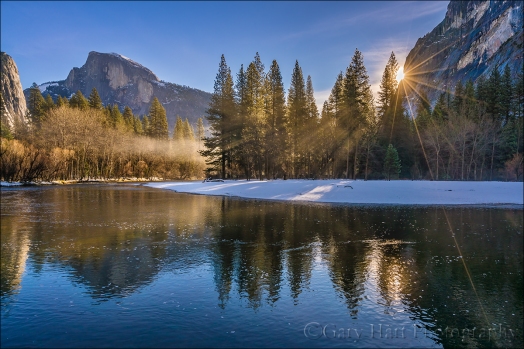 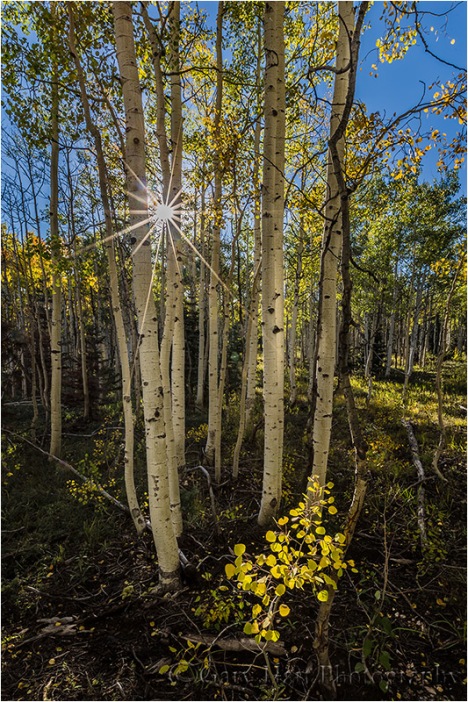 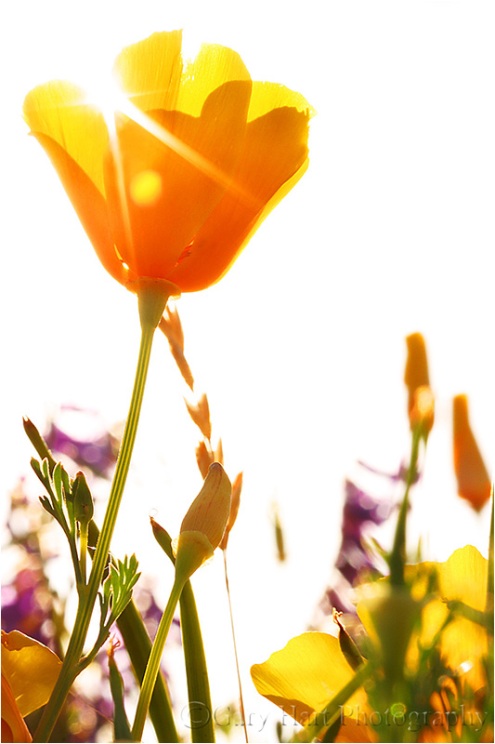 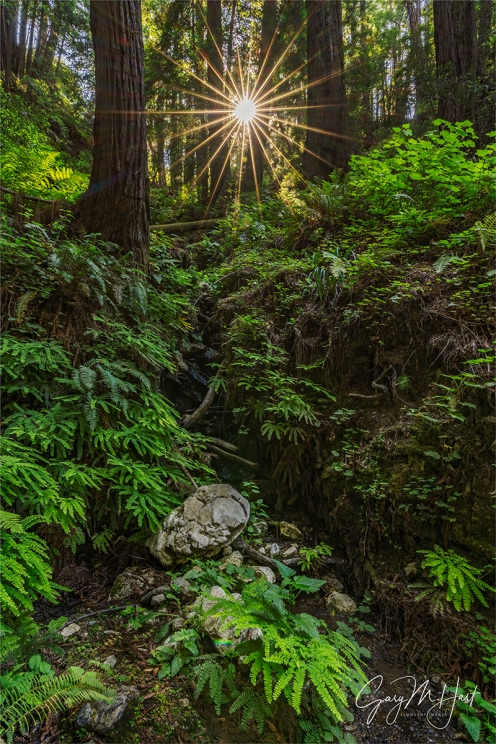 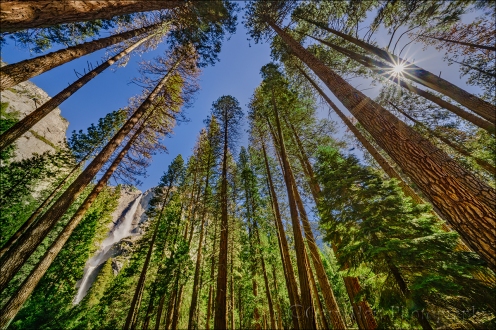 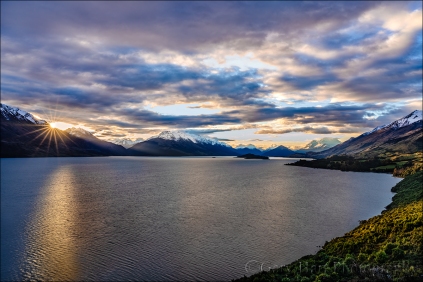 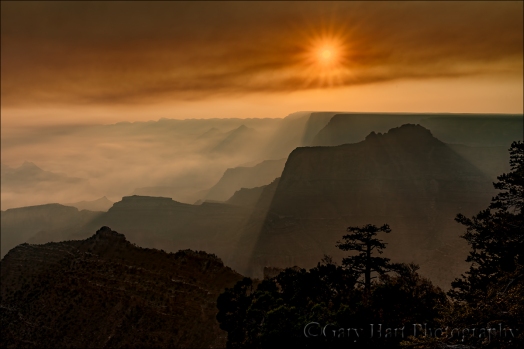 ← One Quiet Night on the Rim
Yosemite Autumn Reflection →