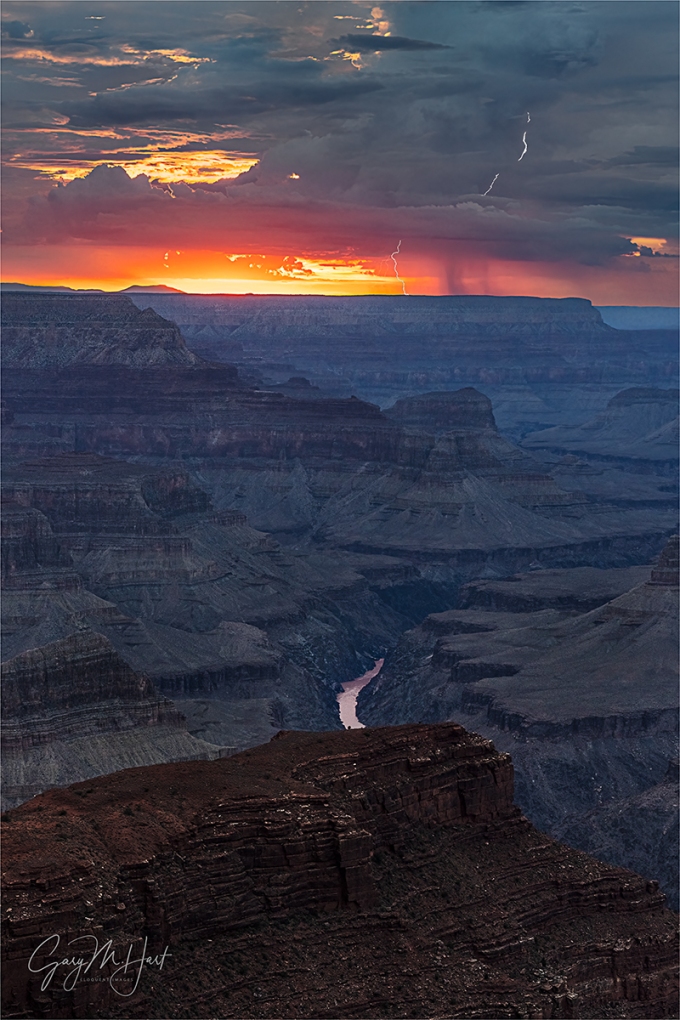 Landscape photographers have a couple of ways to make nice images. By far the most important is the ability to see the special but less obvious, then know how to compose and expose that special vision in ways that clarify and convey the previously unseen beauty. But sometimes we just need to know when to show up and where to point the camera, and the patience to wait for the special to come to us.

Pretty much any sunrise or sunset at a nice location qualifies for the show up and wait approach, as can popular classics such as Yosemite’s Horsetail Fall in February, or the midday shaft of light in Upper Antelope Canyon’s main room. But whether it’s a planned sunset that went even better than hoped, or a rainbow that seemed to materialize out of nowhere, in their own way these gifts from Nature that don’t require great vision are just as thrilling as the hidden discoveries we work so hard for. 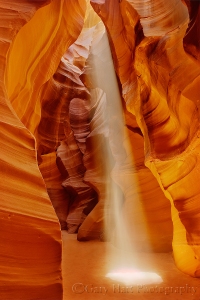 Lightning photography requires a lot of the show up and wait approach, because all the compositional skill in the world can’t make a great lightning image if the lightning doesn’t happen. I can’t tell you how many times I’ve been photographing lightning and seen a beautiful composition—some perfect combination of landscape and conditions—in a different direction, and said to myself, “Wow, wouldn’t it be great if the lightning fired right there.” Unfortunately, lightning is a fickle phenomenon that rarely does what photographers want it to do. In fact, it sometimes feels like the lightning is consciously avoiding the composition I want, always in favor of something much less interesting. Sigh…

Right now I’m at Grand Canyon, trying to take advantage of its expansive vistas that frequently provide views of multiple rain cells with lightning potential. While the vast majority of these potential lightning sources never deliver, my original approach to photographing them was to maximize my chances by identifying and targeting the cell with the most potential, without concern for the composition. An alternate approach to photographing lightning is to target the rain cell with the nicest composition, regardless of the strength of its potential—then hope.

Because I’ve learned that lightning neophytes are usually thrilled to capture any lightning, I generally encourage my workshop students, most of whom have never captured great (or any) lightning images, to favor success over the best composition by simply pointing in whatever direction the lightning is most likely to fire.

I’ll never forget the first time I traveled to the Grand Canyon with the sole desire to photograph lightning, and those first few fruitless days on the rim, pointing my camera toward a promising cell only to see it fizzle. I’d have given anything to have just one frame with lightning, composition be damned. And I also never forget the thrill the first time my camera captured lightning.

Ten years later, I’ve reached the point in my lightning photography where I’ve had enough successful captures that I can afford to be a little more selective. In recent years I frequently find myself pointing at the potential lightning spot that has the composition I like most, shunning the one that appears most likely to produce lightning. It’s often a recipe for failure, but the infrequent successes more than compensate.

I got my most recent dose of compensation last Wednesday evening, in this year’s first (of two) Grand Canyon monsoon photo workshops. My group had already enjoyed several lightning shoots from various locations on the South Rim, but nothing spectacular so far. For sunset Wednesday evening, we took the shuttle out Hermit’s Rest Road (no cars allowed). There are many vistas on this route, so I gave my group enough time to visit as many stops as the wanted to, with the understanding that we’d all gather back at Hopi Point to shoot sunset together there.

Soon after arriving at Hopi Point about 45 minutes before sunset, I checked my My Lightning Tracker app and saw that all of the activity was at least 50 miles away and didn’t really align with anything interesting. While the view at Hopi Point is one of my favorites, I’ve photographed here so much that now I only bring out my camera when there’s potential for something spectacular—either lightning, or great color and/or clouds. So my camera stayed in the bag.

With almost 100 percent cloud cover, my decision seemed reasonable, but as the sun dropped, a small opening appeared on the western horizon, directly in the sun’s path. “Hmmmm,” I said, inching toward my bag. I looked again. A sky filled with clouds and a hole on the horizon is the ideal combination for a colorful sunset, so I pulled out my Sony α1, already loaded with my Sony 24-105 G lens, and set up shop along the rail to wait with the rest of my group.

As we chatted, it became pretty clear that the opening would persist through sunset, and that something nice was in store. A few minutes later, when a small rain curtain spread just to the right of the sun’s path, I said out loud, “All this scene needs is a lightning bolt.” I was half joking, but this thought prompted me to check my lightning app one more time. Still nothing really exciting, but there were hints of distant, minor lightning activity in the general direction of the sunset, so I pulled out my Lightning Trigger—just in case. I encouraged the rest of the group to get theirs out too, then quickly scanned the horizon for other rain curtains with potential for lightning—I saw a couple that might produce, but nothing promising enough to justify anyone diverting from the sunset.

Then we waited and clicked as the sun dropped and started to light the sky. It turned out that the opening wasn’t as open as we’d hoped, so not enough sunlight made it through to color the entire sky, and we never actually even saw the sun. But all was not lost, as the clouds near the horizon throbbed a brilliant reddish orange and I could tell by all the clicking that everyone was pretty thrilled.

When a few higher clouds lit, I oriented my camera vertically and angled farther upward for more sky than I usually include here (Pro tip: the Grand Canyon is usually more interesting than the sky.) Already pretty content with what I had so far, imagine my surprise when, just as the color reached its crescendo, a streak of light darted from the clouds and kissed the horizon. My first reaction was that it came from higher in the sky than I’d have expected, but it happened so fast and unexpectedly that I really wasn’t sure what I’d seen. In fact, if the rest of the group hadn’t exclaimed in unison, I might not have believed I’d seen it at all.

The unified exclamation quickly turned to joyful laughter from those who had taken the time to attach their Lightning Triggers, and regretful moans from those who hadn’t. When a couple of people defied my recommendation to not check to see if they’d captured the bolt (you have to turn off the Trigger to review images, and often lightning’s not as visible on the review screen as it is on a computer) and reported success, I couldn’t resist and checked mine too.

There it was. I instantly saw why it had appeared to originate so much higher: the bolt had emerged high, slid across the front of the thunderhead, and weaved through a window in the clouds before disappearing and emerging one last time. And perfectly aligned with the Colorado River, it couldn’t have struck in a more ideal place if I’d have drawn it in myself.

I’ll admit that this image isn’t a creative masterpiece (the composition isn’t much different from several of my other Hopi Point images), but I will take a little credit for being there, and also for the foresight to be ready for lightning when its possibility wasn’t obvious. And honestly, it was simply an honor to be there for something so magnificent—my only job was to wait, and not screw it up. 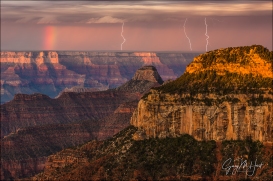 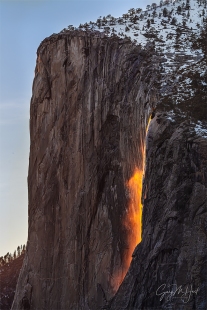 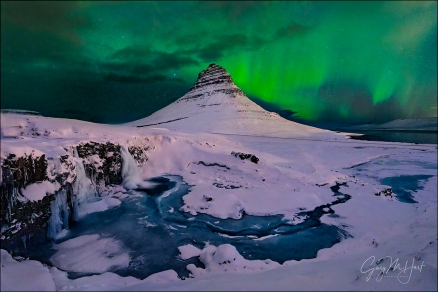 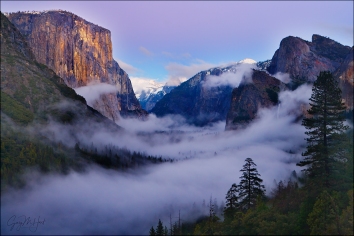 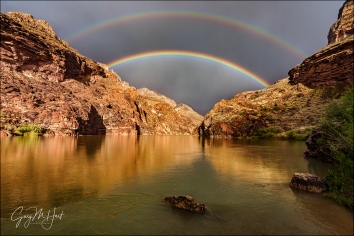 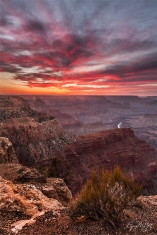 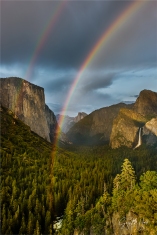 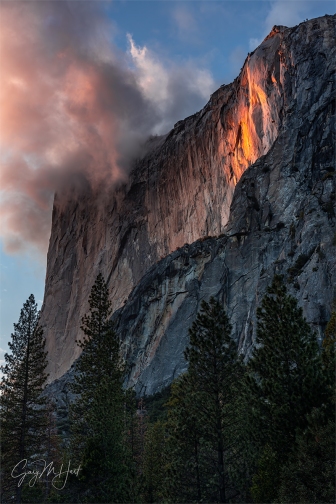 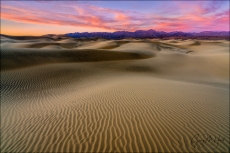