From my front door I can be in Yosemite Valley in less than four hours (including a stop for gas and another for Starbucks). I enjoy the drive and am not averse to doing a one day up-and-back when I think something special is in store. And nothing is more special than a chance to photograph Yosemite with fresh snow.

My most recent Yosemite snow-dash was last month. Given the fickle nature of Yosemite’s weather, and four years of drought that have made Yosemite snow a rare commodity, I made this trip an overnighter to maximize my odds.

Though I arrived well ahead of the storm, dense clouds and a damp chill ruled the afternoon. Instead of rushing into photography mode, I used the relative calm to scout the conditions, and was pleased to find water in the falls and a few traces of autumn color lingering in some of the more sheltered spots.

The rain started just as night fell. Descending the hill to my hotel that evening, I monitored the outside temperature and was cautiously optimistic about the next day. I enjoyed a warm, quiet evening in my room, cleaning sensors and filters, organizing my wet-weather gear, and visualizing scenes of snow and granite.

As expected, that morning I left El Portal in a steady rain, but the drops on my windshield turned to flakes at about 3,000 feet—exhale. By the time I reached Cascade Fall at 3,500 feet, snow was sticking to the trees, and it only got better from there.

This was not a particularly heavy snowfall, but I stayed all day and the clouds never completely cleared. Instead, the storm ebbed and flowed, lifting its stratus cap enough to reveal all of Yosemite’s iconic landmarks, then dropping the lid to obscure everything beyond a few hundred yards.

I concentrated most of my attention on the assortment of El Capitan reflections on the west end of Yosemite Valley. For this image I parked at the El Capitan Bridge and walked upstream along the riverbank a short distance. From here I was close enough to El Capitan that I was unable to get all of El Capitan and all of its reflection in one frame, even at 16mm. I decided to bias my composition to the reflection, and as I worked the sky peaked through just long enough for me to include it in a handful of frames.

Yosemite in the snow 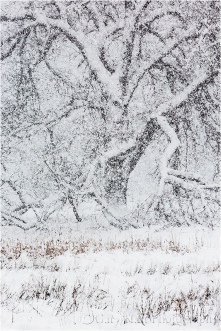 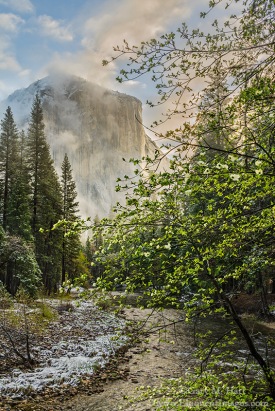 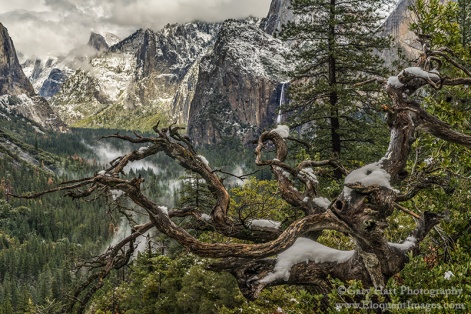 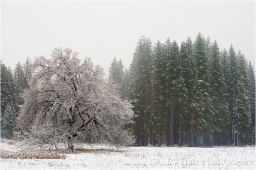 ← What lens should I use?
Dinner is overrated (and I have the pictures to prove it) →