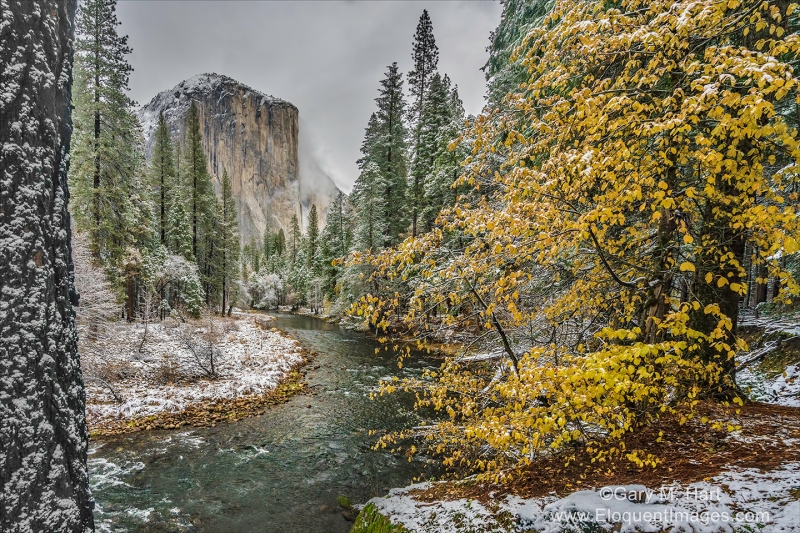 A few days ago Sony asked me to write a couple of small pieces on “my favorite landscape lenses.” Hmmm. My answer?

My favorite lens is the lens that allows me to do what I need to do at that moment. In fact, to avoid biasing my creativity, I consciously avoid approaching a scene with a preconceived notion of the lens to use.

What I mean is, when I charge into a scene too committed to a lens, I miss things. And “favorite” tends to become a self-fulfilling label that inhibits creativity and growth. Rather than picking a favorite, I’m all about keeping my mind open and maximizing options.

I went on to say:

I have other, “specialty” lenses that I bring out when I have a particular objective in mind. For example, my Tamron 150-600 when I’m after a moonrise or moonset, or my Rokinon 24mm f1.4 when the Milky Way is my target. And even though I have a bag that will handle all of these (plus three bodies, thank you very much Sony mirrorless), I need to weigh the value of lugging lenses I probably won’t use against inhibited mobility in the field.

Ruminating on this favorite lens thing kindled my curiosity about which lenses I really do favor—so I did the math. (Okay, I let Lightroom Filters do the math.) Of the 10,395 times I clicked my shutter in 2015, here’s the breakdown:

Primary lenses (always in my bag)

There are a lot of qualifiers for these numbers—for example, the total may be skewed a bit for the 24-70 as it is the lens I use most for lightning photography, and when my Lightning Trigger is attached and an active storm is nearby, it can go through hundreds of fames in a relatively short time (even when I’m not seeing lightning). Also, since getting the Tamron 150-600, I sometimes used that lens as a substitute for the 70-200, something I virtually never did with Canon and my 100-400 (which I didn’t particularly like). And I haven’t used the Zeiss since getting the Rokinon, so I really could lump those two together.

What does all this mean? I don’t know, except that I have a fairly even distribution between wide, midrange, and telephoto. That’s encouraging, because I never want to feel like I’m too locked into a single lens. But two things in particular stand out for me: the high number of 16-35 images, and the low number of 70-200 images.

The 16-35 number is significant only in comparison to my Canon 17-40 and 16-35 numbers from previous years, which were much lower (especially for the 17-40). Wide angle clicks went up quite a bit when I replaced my Canon 17-40 (which I was never thrilled with) with the Canon 16-35 f2.8 (which I liked a lot more). But I don’t think they were as high as they are with my Sony/Zeiss 16-35, which is probably a reflection of how pleased I am with the quality of those images, combined with that lens’s compactness. The jury is out on whether it signals a transition in my style, but it’ll be worth monitoring.

The most telling statistic to me is how few 70-200 images I took. I really like the lens, so it’s not a quality thing. And as I said earlier, some of that is an indication of how much I enjoyed shooting with the big Tamron, but that’s not the entire answer. My Canon 70-200 f4 was one of my favorite lenses, and I always enjoyed using it to isolate aspects of a scene, and maybe I’m not doing that so much since my switch to Sony. So here’s a goal for 2016: Don’t forget the 70-200. Stay tuned….

This is another image from my recent Yosemite snow day. It’s just another example of how much I enjoy photographing Yosemite when its seasons are changing—either snow with autumn leaves, or snow with spring dogwood and waterfalls.

On this chilly, wet morning, during one of the breaks when the clouds lifted enough to expose Yosemite’s icons, I was at a spot above the Merced River with a nice view of El Capitan. I like this spot for the dogwood tree I can align with El Capitan, and because it’s not particularly well known. I found it about ten years ago while wandering the bank of the Merced River looking for views (something I encourage anyone who wants to get serious about photographing Yosemite to do).

I tried a few different things here, starting with closer compositions using my 70-200 and 24-70 to highlight the snow on the leaves with El Capitan in the background. I eventually landed on this wide angle view that used the snow-dusted dogwood tree to balance a more prominent El Capitan. Because the opening is narrow here, I struggled with how to handle the tree on the left. I eventually decided, rather than featuring it or eliminating it, to just let its textured trunk frame the scene’s left side.

Sharpness throughout the frame was essential. With the trunk less than three feet away, the depth of field benefit of shooting at 16mm was a life-saver, giving me front-to-back sharpness at my preferred f11 (the best balance of DOF, lens sharpness, and minimimal diffraction)—as long as I focused about five feet away. Focus handled, my next concern was the breeze jiggling the leaves. At ISO 100, my shutter speed in the overcast, shaded light was 1/20 second; increasing my ISO to 800 allowed a much more manageable 1/160 second. Click. 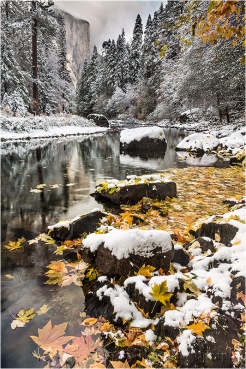 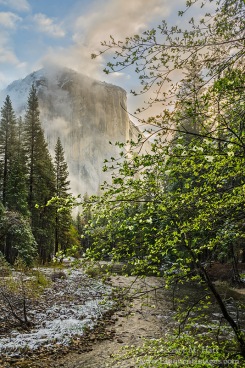 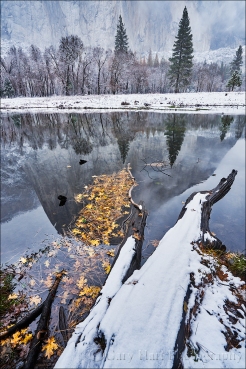 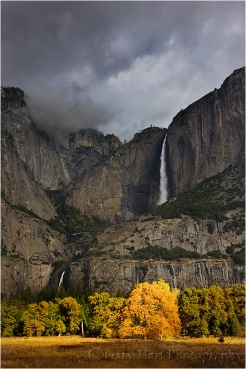 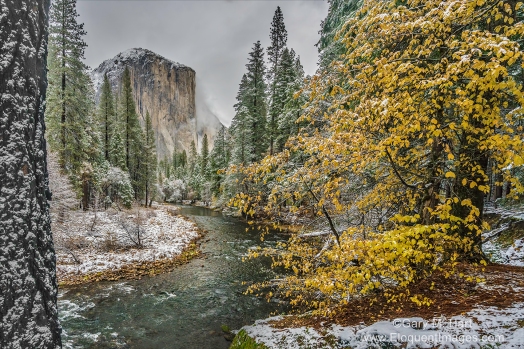 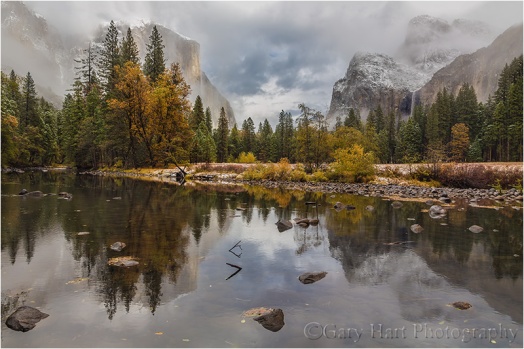 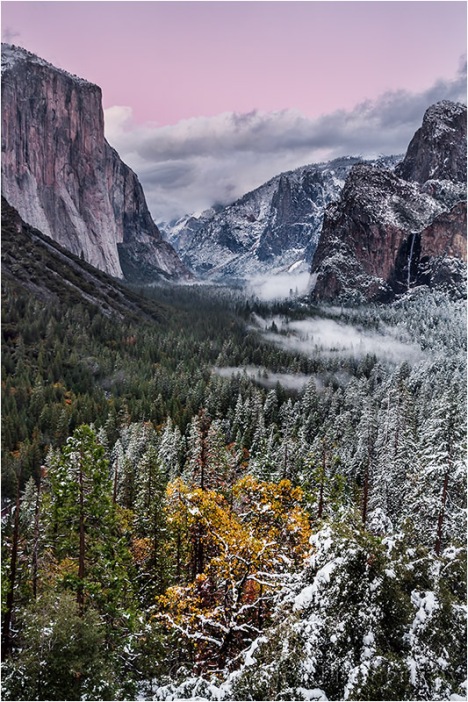 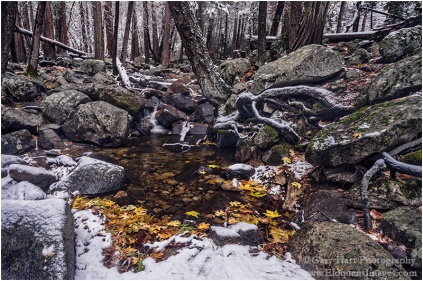 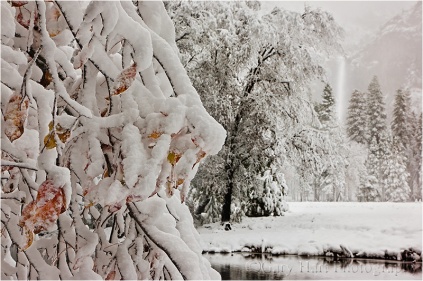 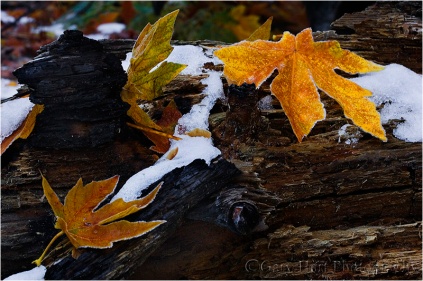 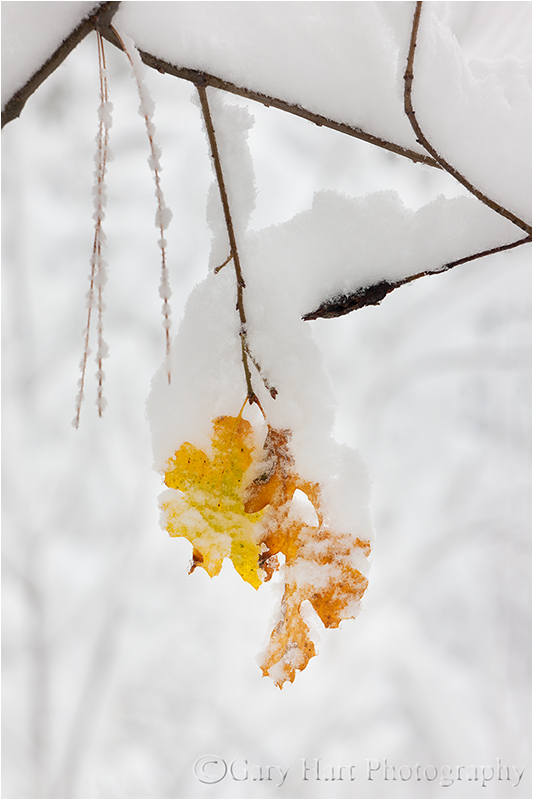 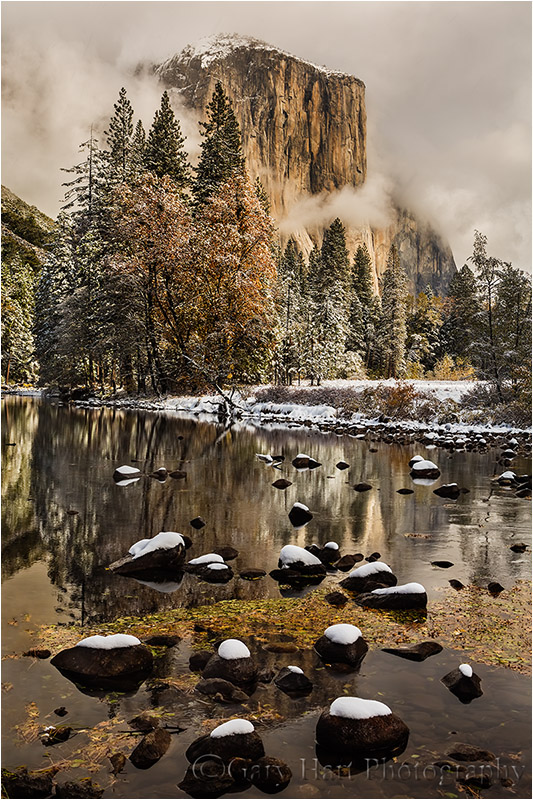 ← Think before you shoot
Yosemite and me →

9 Comments on “Doing the math”