Reflections on the polarizer

Photographers who think a polarizer is only for darkening the sky miss opportunities to saturate color and and emphasize texture in shade or overcast. Even worse, some photographers screw on a polarizer without understanding how it works, mistakenly believing that merely having it attached is sufficient.

The amount of polarization any composition calls for is a creative decision that can make or break an image. And unfortunately, a mis-oriented polarizer is worse than no polarizer. With no Photoshop substitute to help you recover, your only option is to get the polarization right at capture.

So what does a polarizer do?

It helps some people to understand that a wave of light oscillates perpendicular to its direction of motion–picture the way a wave in the middle of the ocean rises and falls as it advances: the wave moves forward, but the water moves up and down. In very simple terms, by removing light that oscillates in a specific direction, a polarizing filter removes reflection. Polarization (reflection reduction) is most pronounced when your lens points 90 degrees (perpendicular) to the direction of the sun (or other light source); its least effective when the lens points directly toward or away from the sun.

A  circular polarizer (what you want for today’s digital SLR cameras) screws to the front of your lens. Rotating the polarizer’s outer element relative to its fixed, inner element, varies the orientation and amount of polarization. You can see its effect (sometimes large, sometimes small) through your viewfinder or on your live-view LCD.

What a polarizer does for you

With reflections minimized by a polarizer, pale blue sky is transformed to a deep blue, the natural color and texture of rocks and foliage pops, and clouds that were barely visible suddenly snap into prominence. Or, imagine mountains reflected in a still alpine lake: As you rotate your polarize, the reflection is replaced by rocks and leaves dotting the lakebed; keep turning and the reflection returns.

So what’s the catch?

A polarizer costs you one to two stops of exposure, depending on the polarizer and the amount of polarization you dial in. Since aperture manages depth, landscape photographers usually compensate for the lost light with a longer shutter speed–one more reason to use a tripod.

Because a polarizer’s effect varies with the direction of the light, and wide lenses cover such a broad field of view, light strikes different parts of a wide scene from different angles. The result is “differential polarization”: parts of the scene that are more polarized than others.

Differential polarization is particularly troublesome in the sky, appearing as an unnatural transition from light to dark blue across a single frame. This effect can often be reduced, but rarely eliminated, with careful dodging and burning in Photoshop. Better yet, avoid images with lots of (boring) blue sky.

A standard polarizer is comprised of a circle of polarized glass mounted in a frame that screws into, and rotates relative to, the fixed lens beneath. Many also include an outer ring with threads for attaching other filters. The field of view of ultra-wide lenses can be so great that, at their wider focal lengths, they include the polarizer’s frame: vignetting. Polarizer vignetting manifests as dark edges on your images, particularly at the corners.

Most of the best polarizer manufacturers offer a low-profile version that mitigates vignetting. Low profile polarizers are more money (oh well), usually require a special lens cap (usually just a minor annoyance), and don’t have external threads (not an issue for me).

A polarizer oriented to minimize reflections will completely erase a rainbow. So if you’re shooting a photographing a rainbow, turn your polarizer until you see the rainbow at its brightest. And if you’re photographing scene that could get a rainbow, pull away from your viewfinder from time-to-time just to be sure that you’re not missing something special.

Since I’m all about simplicity in the field, and determining whether or not I need a polarizer and then installing or removing it as needed is more trouble than it’s worth, each lens has its own polarizer that never comes off during daylight hours. I remove my polarizer only when I need more light; but remember, I’m always on a tripod, so unless it’s night, or I’m dealing with wind or water motion, the light lost to the polarizer isn’t a concern for me.

But. Shooting with no polarizer is better than using an incorrectly oriented polarizer. If you’re going to follow my “always on” polarizer approach, you must be diligent about rotating the polarizer and checking its effect on each composition, or risk doing more harm than good to your image.

Like many photographers, I always use a filter as protection for my front lens element; unlike many photographers, I don’t use UV or skylight filters. While it’s possible to stack a polarizer with a UV or skylight filter, I don’t. Instead, (because it never comes off) my polarizer doubles as protection for the front lens element.

Given that my polarizers are in the $200 range, this gets a little expensive when a filter “takes one for the team,” but it’s cheaper than replacing an entire lens, and more desirable than stacking superfluous glass between my subject and my sensor, not to mention the vignetting stacking causes. On the other hand, I will use a graduated neutral density filter with a polarizer, because GNDs perform a specific (not superfluous) function.

The polarizer and lens hoods

To those photographers who complain that it’s a real pain to rotate a polarizer with a lens hood in the way, I have a simple solution: remove the lens hood. I never use a lens hood. Ever. This is blasphemy to many photographers, but I hate lens hoods, which always seem to be in the way (see my “simplicity in the field” comment above). But (there’s that word again), jettisoning the lens hood must come with the understanding that lens flare is real and sometimes impossible to correct after the fact.

When there’s a chance direct sunlight will strike my front lens element, I check to see if shielding the lens helps. With my composition ready (on my tripod!), I peer through my viewfinder and shield my lens with my hand or hat (or whatever’s handy). If the scene becomes darker and more contrasty, and/or random fragments of light disappear, when my lens is shaded, I know I have lens flare and need to manually shield my lens while exposing. Of course if the sun is part of the composition, no shading in the world will eliminate lens flare.

Polarizer on a budget

All scenes don’t benefit equally from a polarizer, and photographers on a budget can’t always afford one for every lens. If you’re only going to go with one polarizer, buy one for your largest lens–as long as you’re on a tripod, it’s not hard to hold (and rotate) a larger polarizer in front of a smaller lens.

Does this scene call for a polarizer?

To determine the polarizer’s effect, rotate the outer element 360 degrees as you peer through your viewfinder (or while viewing the LCD in live-view). Often just holding the polarizer to your eye and rotating it slowly is enough to determine its benefit. Either way, if you can’t see a change, you probably don’t need to worry about a polarizer.

Because a polarizer can also enhance reflections (and glare), whenever the polarizer is on, you must, must, must test its effect with every composition (and especially after switching from horizontal to vertical orientation). Unless I’m trying to maximize a reflection, I rotate the polarizer until the scene appears darkest. If there’s no apparent change, I watch specific objects that might have a slight sheen (water, a leaf, or a rock) as I rotate the polarizer–I almost always can find some change.

It’s not just for the sky

As nice as the the effect on the sky is,  it’s the polarizer’s more subtle ability to reduce glare in overcast or shade that I find irreplaceable. Peering through your viewfinder (or watching your LCD if you’re using live-view), lock your eyes on a reflective surface and rotate the polarizer. The effect is most obvious on water, or wet rocks and leaves, but even when completely dry, most rocks and leaves have a discernible sheen. As you rotate the polarizer, harsh glare is replaced by natural color and texture; continue rotating and the glare reappears. The glare is minimized when the scene is darkest.

Regardless of the effect, there’s no rule that requires you to turn the polarizer to one extreme or anther (maximum or minimum reflection). Rotate the outer element slowly and watch the scene change, stopping when you achieve the desired effect.

In the North Lake autumn reflection scene at the top of the page, I was able to find a midpoint in the polarization that kept the best part of the reflection (the mountains and trees), while still revealing the submerged granite rocks at my feet. 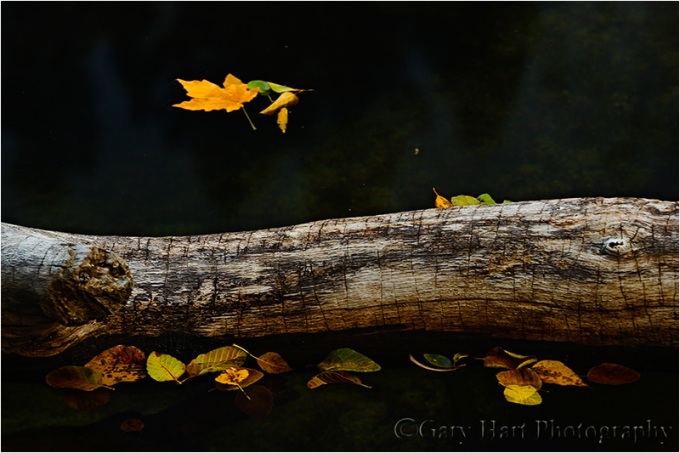 In the above image of autumn leaves floating in the Merced River, I used my polarizer to completely dial down the reflection, creating the illusion of leaves suspended in empty space. Polarizing away the reflection also helped the leaves’ color stand out by eliminating distracting glare. 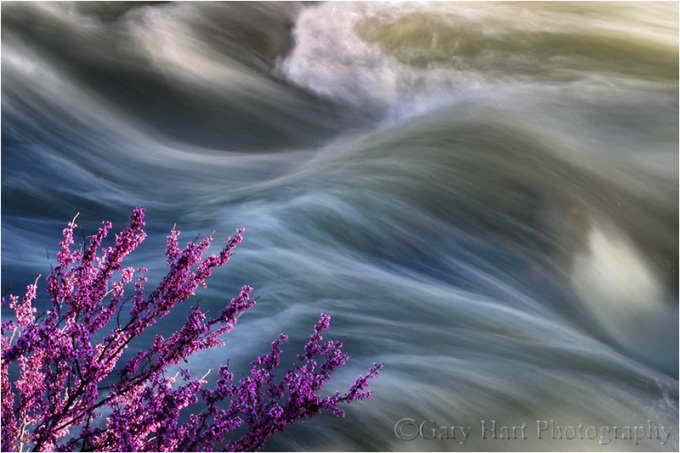 A polarizer can also be used as a two-stop neutral density filter by dialing it to maximum polarization (minimum light). In this image of a redbud above the surging Merced River, even at ISO 100 and f32, I couldn’t reach the 3/4 second shutter speed that would give me the motion blur I wanted. But the two stops of light I lost to my polarizer was just enough to get me where I wanted to be.

If you’re serious about your photography

Use only quality polarizers; you don’t need to spend a fortune, but neither should you skimp. Not only does the quality of the optics affect the quality of your results, I’ve also seen many poorly made polarizers simply fall apart for no apparent reason.

I advise buying polarizers that are commensurate with your glass–in other words, if you have top-of-the-line lenses, it makes no sense to use anything but top-of-the-line polarizers. I use Heliopan, Rodenstock, and Singh-Ray (I refuse to purchase anything from B+W until they fix their low profile lens cap, a problem they’ve know about for years).

My personal recipe for using a polarizer

Like anything else in photography, using a polarizer is an acquired skill that improves with use. You don’t need to immediately jump in with both feet, but I suspect once you tune in to the polarizer’s benefits, you’ll have a hard time photographing nature without one.